From my former colleague at Marvel Comics, Glenn Greenberg (don't worry; no spoilers): 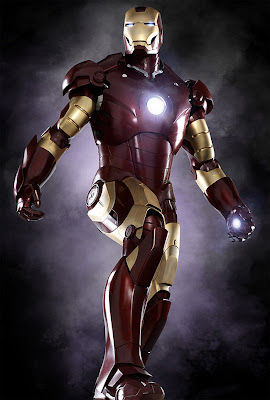 Saw it on Monday night. Here's my take, in a nutshell:

This is NOT the ultimate super hero movie ever made. I wouldn't even necessarily put it in the top 10. There are others that I prefer more.

I have some story problems with the second half, and some of Obadiah Stane's dialogue during the big battle towards the end gets a bit too hackneyed and "comic booky." Certain characters' motivations are a little unclear or muddled, and, in my opinion, the stakes aren't high enough when the movie really kicks into high gear.

Also, I felt that the film lacks a strong emotional core that was so present in SUPERMAN THE MOVIE, BATMAN BEGINS, and the first two SPIDER-MAN movies. It's not that Favreau and co. don't try--actually, some of the stuff between Stark and Pepper Potts is quite good. But I didn't feel myself get pulled emotionally into this film the way I did with the ones I mention above.

The soundtrack — consisting mostly of heavy metal music — is occasionally too loud and distracting. It drowns out some of the dialogue. Speaking of which, there are moments when Robert Downey Jr. is almost indecipherable, talking too fast and too manically to be understood (at least by me).

That said, the cast is wonderful. Downey is perfect as Tony Stark. Gwyneth Paltrow is lovely and radiant and completely believable. Terrence Howard almost steals the movie. And Jeff Bridges brings a strength and a sense of gravitas that benefits the movie greatly. They're all taking their roles seriously, committing themselves to the characters and bringing a sense of realism and, just as importantly, RESPECT for the subject matter.

The special effects are fantastic. The humor works, for the most part. The in-jokes are very clever--and you really have to be sharp to get them all. I know I didn't!

Ok - so I saw Iron Man last night. As a geek, not one as extensive as others who comment on this site, I love comic book movies and happen to like some that others hate (Daredevil for one)and I really liked this one. I have to agree that all the actors honored the parts they played. I loved Gwyneth's Pepper - she was just right for that and THAT surprised me. Robert Downey Jr. was great - just great. The effects were fantastic and I laughed out loud at some jokes and grinned like a little kid at the Iron Man suit. Absolutely loved it. The music didn't bother me over much as I thought it was appropriate but was left me liking the movie but not LOVING it. I felt they rushed it a bit in parts and the ending/climax wasn't as strong as it could have been. I would own this but not see it in the theatre again.