I just got done handling a design 'ho house task that was so up my alley it wasn't even funny.

Everywhere I go I let my geek flag proudly fly and here at the extremely comics-friendly design 'ho house I'm known for my knowledge of pop culture minutia, especially when it comes to comics, so I'm frequently consulted on projects that need the input of someone who's not a casual observer. One of our designers came to me about a half hour ago and described a project in which the company will be composing a Fantastic Four poster featuring significant covers from the series' classic era (roughly 1961-1970), all drawn by the incomparable Jack Kirby. He asked me which covers I would choose, with the exception of issue #1 since that was a given, and he requested a brief note explaining to the company we're doing it for why the covers I would choose count. Well, I had a pretty good idea of what I would use right off the bat, but I checked over the covers just to make sure I hadn't forgotten anything and made my list, giving good reasons for my choices. Good thing I reread the first sixty or so issues a few weeks ago, in those big, honkin' omnibus editions... Anyway, here's what I came up with: 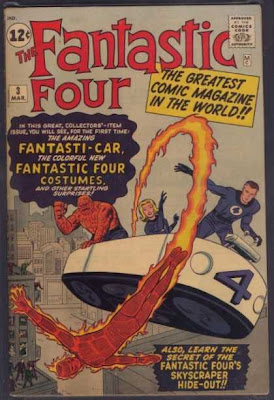 #3-This issue introduced the FF’s uniforms and their signature vehicle, the Fantasticar, so as of this issue they look like conventional superheroes. Everything a reader needed to know about the characters from a visual standpoint is clearly conveyed here. 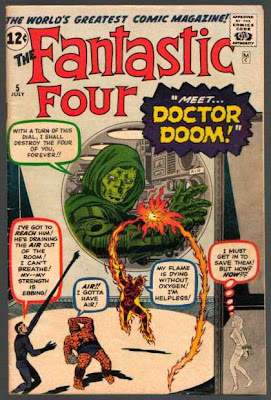 #5-While he looks a bit primitive, this is nonetheless the first appearance of Doctor Doom, so it’s rather significant. 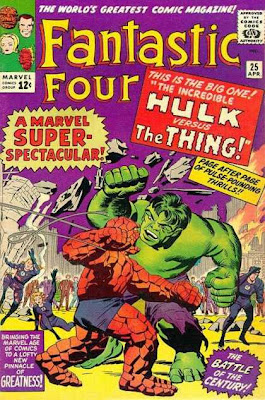 #25-The second of the Hulk versus Thing stories, this story is a real crowd-pleaser and the cover displays Kirby’s signature dynamism to great advantage. 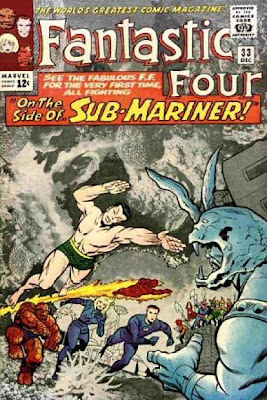 #33-A terrific story where the FF aid their enemy, the Sub-Mariner, and the cover features an early example of Kirby’s collage technique. 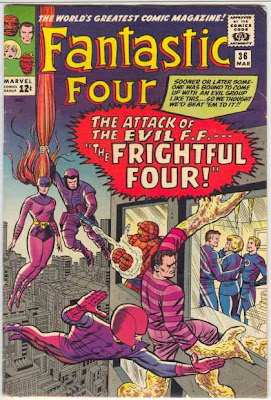 #36-This one features the first appearance of the Frightful Four, the FF’s bad guy analog. A showcase for the villains, this features a great composition, especially the image of the Trapster descending into the frame while hanging from Medusa’s hair. 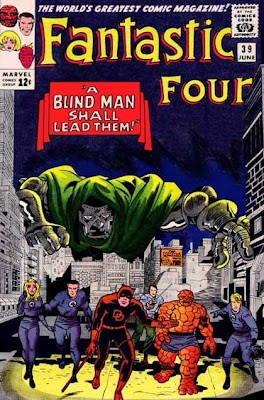 #39-The FF get blinded by Doctor Doom, so sightless superhero Daredevil shows up to lend a hand; a good story, and a great sinister image of Doctor Doom looming over Manhattan. 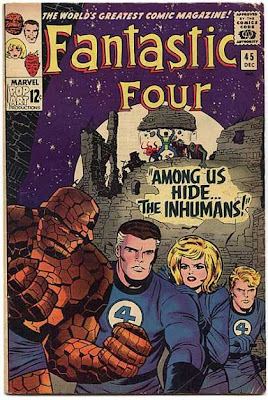 #45-the second chapter in the arc that introduced the Inhumans — one of the all-time classic FF stories — this features a crisp Joe Sinnott ink job over Kirby’s pencils, a welcome change from the butchery committed by Vince “the man who erased armies” Coletta, offering up one of the definitive cover portraits of the FF as well as giving us a look at the still-mysterious Inhumans in the background. 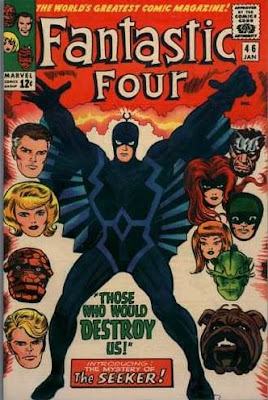 #46-This one gives us our first cover image of the fully revealed Inhumans and the definitive image of their king, Black Bolt. 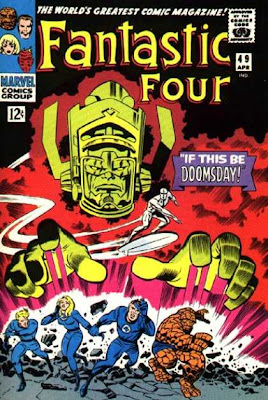 #49-The first cover appearance of Galactus. That’s all I need to say. 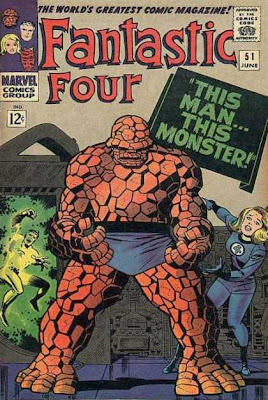 #51-“This Man...This Monster,” the definitive Thing story and a downright iconic image of the character. This image has been referenced countless times since it first appeared; next to #3 and the Galactus cover, you will find no more iconic Fantastic Four cover. 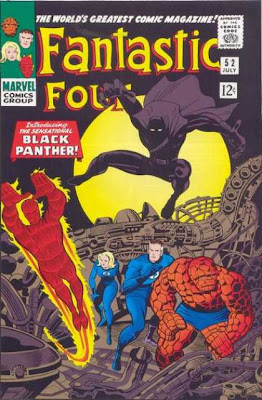 #52-This story’s merely so-so, but it’s historically important to the Marvel Universe and comics in general for featuring the debut of the Black Panther, the first black superhero. The character has since gone on to considerable popularity, enduring to this day and carrying one of Marvel’s more popular contemporary titles. 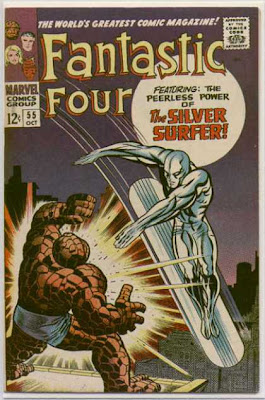 #55-A beautiful cover for one of the last truly great stories from the original FF run, featuring the finest Kirby-drawn cover image of the Silver Surfer, one of Marvel’s most popular characters.

NOTE: after issue 55 Kirby still turned out some memorable covers, but by that point the stories began to suffer as he became demoralized by his treatment at Marvel and lost interest in the series. Avoid using the rest because they are little more than window dressing.

That last note may come across a bit glib, but it serves to clue the client in on what was what; if you look at those later covers you can really see the wind has gone out of Jack's sails, and while still basically good, his heart just wasn't in it.

So there you have it. Do any of you have a list that would better serve the purposes of this project? If you do, please send it in, but stick strictly to the Kirby stuff.

Man, I need to get me some pussy. Immediately!
Posted by Bunche (pop culture ronin) at Thursday, April 24, 2008

The only thing I would add is that Grade-B Kirby is still better than most everyone else. Especially from that era.

Those are some great choices - Personally, I think #46 is maybe a bit weak, as the focus is pretty much on Black Bolt, with the FF appearing only as floating heads. I might go for #10 instead, with that really great sneering, evil Reed Richards and the appearance by Stan and Jack (which is, of course, very characteristic of the era). #42 would also be a great choice - it features the incredibly dynamic fight between Reed and Ben, plus the blissful goofiness of the short-lived "Marvel Pop Art Productions" logo.