One of the panels I can't wait to witness at the upcoming Comicon is "Girls Who Kick Ass," a gathering of female comics creators that also, ludicrously, features former porn star Jenna Jameson. Apparently Jameson's there to find properties to parlay into a movie or some shit, but seriously, what is she doing on this panel other than being what amounts to the geek who bites the heads off of live chickens in an effort to get gawkers into the carnival tent? She is in no way, shape, or form a comics creator, and to put her in the same forum for discussion as worthies such like Colleen Doran, Louise Simonson, my homegirl Amanda Conner, and "assorted guests" would seem to be a setup for a Chernobyl of embarrassment for Jameson and the other panelists. Is Jameson in any way cognizant of comics, and if not what can she possibly offer here? It's one thing to reveal yourself as a fun and amusing guest in a venue like THE HOWARD STERN SHOW, but when it comes to things comics-related you had better know your shit and put up or shut up, lest the fanboys eat you alive. If Jenna does indeed know her shit then huzzah for her, but just in case I suggest that attendees have their dining utensils at the ready.

There's also a bit of controversy over this panel because of the tired "women in comics" thing once more being dragged out when by now one would think that we'd be past the utterly pointless gender issue of female creators being considered some kind of novelty. The fact is that there have been women involved in comics since way back in the days, even before the Golden Age, and even though the mainstream industry is by and large pretty much a boy's club, the fact of a person's gender has no bearing on their creative capacities whatsoever, so can we please get over this horseshit and move the fuck on please? The panels should focus on the folks with the talent, gender being a non-issue, end of discussion.

And while we're at it, I have to state that while I have absolutely no problem with a former tenderloin goddess getting involved in comics if she has the requisite chops and sincere interest, I do call foul on Jameson representing as a "girl who kicks ass" when she currently looks like the poster child for eating disorders. Seriously, what message does she send to the female youth of America by showing up looking like Miss Dachau 1943? Girls and grown women have enough media-spawned body image issues to deal with without this unhealthy-looking spectre taking the spotlight at a comics convention. Yes, I know full well that the comics have perpetuated male-oriented fantasy images since the get-go, and that Jameson's former career also did something similar — although with an abundance of non-Code-approved "luncheon meat" on display — , but the shocking reality in this case is that she looks like she's dying of starvation or severe drug-addiction. Where once Jenna rocked a curvy and exuberant image (see below), 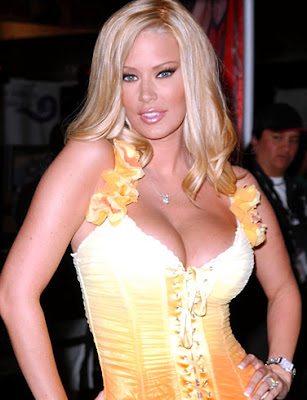 Jenna Jameson, during her heyday.
she is now an emaciated shadow of her former self (see below), 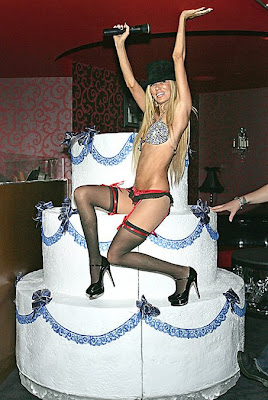 Jenna Jameson, January 2008.
and I wonder what the hell kind of message that sends out. Just something to ponder.

Anyway, for more on Jenna and the "Girls Who Kick Ass" panel, check out what Heidi MacDonald has to say about it over at THE BEAT.
Posted by Bunche (pop culture ronin) at Wednesday, April 16, 2008

First of all WTF? There is no reason as why she was even there! If I had been there I would have asked outright why she was on the panel. Ridiculous. Second of all she looked so much better as a voluptuous woman then the stick she has become. Yuck.

Seconding the Warrior Princess. What the FUCK happened to Jenna? Oh, yeah - tabloid celebriculture, wherein any woman who goes over 105 pounds becomes a front-cover disgrace to her gender. Hate that shit, deeply.

Also seconding Herr Bunchster. Jenna Jameson? PLEASE! Now, JULIE STRAIN, I could see, easily. She'd be appropriate. Oh, but then she's got too much flesh on her to qualify.

If I were going to this con, I'd bring a Dagwood sandwich, put it on the panelists' table, and tell Jenna that she clearly needs it.

OH MY GOD!!! SUCH A NASTY WHORE