Special thanks to fellow daikaiju enthusiast Mark G for bringing this to my attention.

According to the good folks over at WIRED, today is the forty-forth anniversary of the release of Ishiro Honda's MOTHRA VS. GODZILLA, considered by many (including Yer Bunche) to be the best of the old school Godzilla flicks. 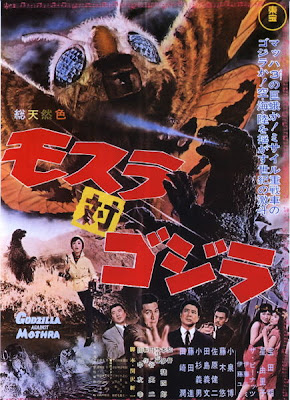 Original Japanese release poster.
One of the most fondly-remembered of the series, this one was originally released in the US as GODZILLA VS. THE THING, a name no doubt familiar to all of us 4:30 MOVIE disciples. 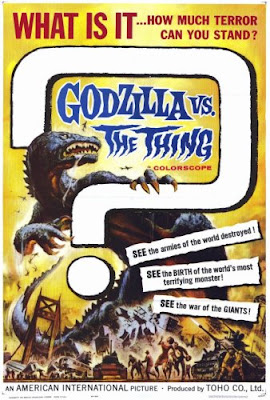 Poster from the original US theatrical release.
That title confused the shit out of us monster kids before we actually saw the movie, and it made me wonder just how the fuck an eight-foot space-carrot stood any kind of a chance against Godzilla, a monster almost ten times the size of the not exactly diminutive King Kong, whose size was supplemented with the ability to breathe and rather accurately direct intensely radioactive fire. 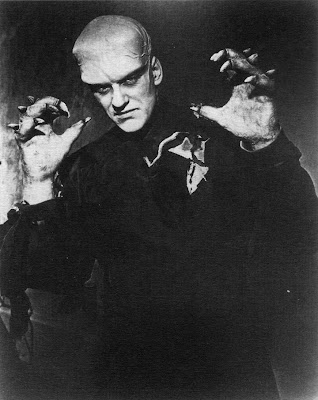 James Arness as the title character in THE THING FROM ANOTHER WORLD (1951), aka simply THE THING, emphatically not the "thing" in GODZILLA VS. MOTHRA'S American title. A match for the Big G? I think not.

When finally viewed by us awed monster kids, the Thing turned out to be none other than the incredible Mothra — "Mosura" to us hardcore daikaiju goons — the elegant and kite-like goddess of tropical Infant Island, first seen in what I consider the finest of all the Toho monster flicks, 1961's MOTHRA. That film was both a giant monster genre masterpiece — right up there with KING KONG, from which it cribs certain plot elements, and the original 1954 GODZILLA — and a visually beautiful fantasy piece that had something for everybody, so it was only a matter of time before we saw more of the majestic moth deity. Since Godzilla had already carved a special niche for himself among the Japanese screen's fantastic menagerie it seemed like a good idea to pit the seemingly-delicate bug against Big G's brute force for what would be the first of the Toho universe's ongoing crossovers of its monster stars, and the results are simply glorious and remain unequaled over forty years after the fact. There are those who prefer GHIDORAH THE THREE-HEADED MONSTER (also 1964, making it a damned good year for giant critter movies), MONSTER ZERO (1965) — aka INVASION OF THE ASTRO-MONSTER — or the all-star monster fest DESTROY ALL MONSTERS (1966), but while fun, none of those equals MOTHRA VS. GODZILLA for quality of story, filmmaking, and sheer, balls-out clash-of-titans fun.

The plot is simplicity itself: in the aftermath of a typhoon, a gigantic egg washes up on the shore of a humble fishing village and the locals wonder just what the hell it is (they obvisously never sat through MOTHRA).

If only they had enough ham to go with it...

A douchebag entrepreneur shows up, buys the egg from the villagers and immediately sets out to exploit it, continuing his avaricious schemes even after being told that it's Mothra's egg by the goddess' twin faerie priestesses (Emi and Yumi Ito, reprising their beloved characters from MOTHRA). But whereas Mothra was once a mighty and literally unstoppable force of nature, her life cycle is almost at an end and she is too weak to make the trek from her island to retrieve her egg. And as if that doesn't suck enough, Godzilla erupts from the ground after a period of dormancy (after the previous movie's idiotic wrasslin' matches with "Kimono Kong," that duck-looking monument to bad ape suits)

and immediately strolls through heavily-populated areas.

Godzilla: the worst nightmare of real estate owners and architects.
As the military's efforts prove once more to be worth fuck all, the hapless human characters appeal to the faeries to enlist Mothra in aiding them, which Mothra does at the cost of her own life while defending her egg against Godzilla's onslaught.

One of the great things about this film: you really get to see the enormous scale of the monsters as the widescreen cinematography ("Tohoscope") is used to full advantage.

As Mothra croaks and kids everywhere cry, the egg hatches and two gargantuan Mothra larvae crawl forth and somehow kick Godzilla's ass, utilizing the terrifying offensive capabilities of a steady stream of cocoon silk (that looks a hell of a lot like cotton candy). THE END.

Not exactly SEVEN SAMURAI, but it sure as hell is a lot of fun, and if you haven't seen it you owe it to yourself to see just how good a Godzilla movie could be before they were diminished by ever-declining budgets and a studio directive that aimed the latter half of the original series — the "Showa" era, roughly the films made between 1954 and 1980 — at the kiddie audience. Godzilla is not the anthropomorphised protector of the earth that he would eventually become, and is seen here as a fearsome leviathan that man's pitiful weaponry cannot hope to overcome, a somewhat ironic point since man's fucking around with atomic weaponry created him in the first place (or, more accurately, mutated a pre-existing dinosaur).

And whatever happened to the other young Mothra?

Mothra's babies: and then there was one...
There's only one in evidence after this, so did it leave Infant Island and perish in the sea, leaving a corpse that looked like the biggest "floater" you've ever seen? Some things man was not meant to know...

I wonder how Godzilla would fare against John Carpenter's 1981 version of the Thing.

Assuming it's smart enough to not get fried by Godzilla's radioactive breath, could it manage to "infect" Godilla and create an unstoppable giant "Thing"?

That would make a cool movie.

And what if Godzilla swallowed an Alien egg impregnator (or whatever they called those crab-like nasties)? Would a humongous belly burster jump forth out of Godzilla and kill him?

Perhaps I need a life...