GEEKIEST BOOK OF THE YEAR! (SO FAR, THAT IS) 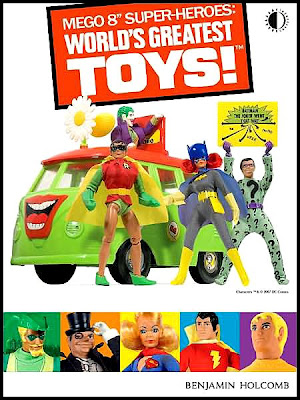 For those of us of a certain age, a wistful smile crosses our face when we recall our favorite toys of yore, and the Mego line of 8" super-heroes holds a warm place in the hearts of many. Issued from 1972-1982, "the World's Greatest Super-Heroes" fought the good fight in many a backyard or playground adventures and frequently fell apart thanks to the cheap rubber bands that held their limbs and torsos together, but that cheapness made them quite easy to be willingly replaced by parents who would rather not shell out the cash for the much more pricey G.I. Joe during his "Adventure team" days.

Running the gamut of many of the major heroes and villains of "the Big Two" — with the charmingly laughable rendition of Tarzan thrown in for good measure (he had been licensed by DC at the time, and Mego contacted the Edgar Rice Burroughs estate to obtain the rights for his use, but I still say he doesn't count) 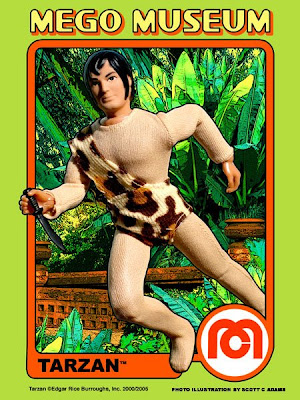 Mego's infamous Tarzan figure (image from THE MEGO MUSEUM).
— the Mego series ranged from spectacular for the time (Thor and Conan), to the pitiful (the aforementioned Tarzan, an action figure so bad that even a hardcore Tarzan booster like me didn't want one, and also actually engendered the playground chant of "Tarzan sucks!" if you were unfortunate enough to shop up with him as your World's Greatest Hero), and the downright fucking bizarre (a Clark Kent figure that looked like a cross between the Spirit and Elvis Costello if he'd fronted a ska band, and a Catwoman who resembled the singer from the Yeah Yeah Yeahs if she were strung out on heroin on Halloween), and are now highly-sought-after collector's items that command prices steep enough to make you do a double take. If I had known at the age of seven just how much my Batman and Robin with removable masks would have eventually been worth....

Anyway, uber-obsessed collector Benjamin Holcomb reportedly put four years of his social life on hold to research and craft MEGO'S 8" SUPER-HEROES: WORLD'S GREATEST TOYS!, just about the most impressive and handsomely composed book on coveted collector's toys I've ever seen. The hardcover coffee table tome traces the history of the Mego company from its humble beginnings in 1954 as an importer of those cheap toys found on the checkout line in supermarkets, put there to appease fussy little kids, through its demise in 1983, and it's an interesting tale indeed, but the book wisely avoids covering the company's other toy lines — the Micronauts line would make for an equally captivating, book, but that's another subject altogether — and focuses squarely on the superheroes.

Exhaustive in detail, the book examines the superhero line with the fascination a bug collector reserves for a rare and beautiful specimen, providing all the product info along with page after glossy page of crisp photos that show off the figures in question in multi-image turnarounds that display every nuance with crystal clarity (perhaps not such a great idea in the cases of Tarzan and Catwoman). In short, MEGO'S 8" SUPER-HEROES: WORLD'S GREATEST TOYS! is the best book one could possibly hope for on this subject. Me, I would prefer a similar edition focusing on the pre-1980's G.I. Joe line, Major Matt Mason ("Mattel's Man In Space!"), or my favorite toys of all time, the Outer Space Men, but for now this will have to do.

You can buy this marvelous book for just shy of fifty bucks at your local comics shop (and belive me it's worth it), or you can do the smart thing and snag it on Amazon for about fifteen bucks cheaper. TRUST YER BUNCHE and buy this sucker, already! It's nostalgic, fun, and absolutely indispensable for collectors, offering everything one could need except for a price guide.
Posted by Bunche (pop culture ronin) at Friday, April 11, 2008

Tarzan was definitely weak, but the only thing that truly annoyed me then and to this day were the oven mitt gloves they (mostly) stuck on the DC figures.

What were they thinking?

It also seemed like the Marvel figures got much better treatment from Mego than the relatively low-rent DC figures.

Sigh. Either way, I'm picking this book up on Amazon...

Dude you get EXTRA points for remembering the Outer Space Men toys. For the longest time I thought I had imagined them, but then I found them on the internet and knew I hadn't be dreaming. They were the funkiest looking shit I've ever seen.

And I should qualify my low rent comment before since the Green Arrow figure is as good as anything Mego made...

I remember I buried mine in the backyard in the Fall of '76, forgot about him until Spring, then dug him up. He was still cool.

And the Outer Space Men! Friends of kids and foes of safe-toy advocates everywhere!