I awoke earlier than usual this morning and decided to get a cheap, quick breakfast from the local McDonald's on Fourth Avenue, so I slogged down the street and around the corner to the normally kiddie-infested temple of the Golden Arches. While on my way I passed the building where my pal Susie, the hilarious, green-eyed computer hottie, lives with her enormous and incredibly gay black poodle Reggie, and saw the sight showcased below: 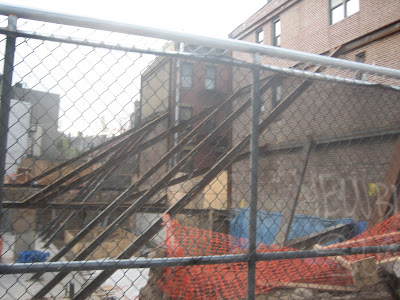 When Suzie moved in from California some months back, construction had commenced on a new apartment building right next to hers and in the process of that work being done the construction caused the foundation of her building to be undermined, creating a big crack in her wall and resulting in the tenants being evacuated until the building inspectors determined if it was safe for people to reside there. Things were cleared up very quickly and the construction continued apace, but when I walked by this morning I saw the above series of girders bracing Suzie's building. She's moving soon anyway, but if you lived in this building wouldn't you consider girders holding the structure up a hint and a half for your ass? I'm just glad she and her queeny pooch are getting out of there.

So I get to McDonald's and order a breakfast sandwich, and while waitng for my order I looked over at the Happy Meal kiddie toy display and beheld this unexpected item: 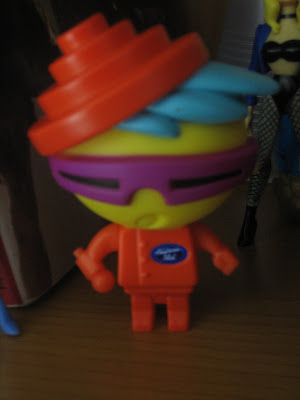 This is "New Wave Nigel," part of the American Idol tie-in line of toys, but for all intents and purposes it's really a Devo toy. If that ain't an Energy Dome on his head, I'll eat my own buttocks on live television. When you twist his arm to raise the mic to his mouth a Devo-esque bit of synthesized instrumental tomfoolery issues from his over-sized head, sounding not unlike a very annoying cell phone ringtone. Needless to say, I shelled out the $1.96 for him and promptly set him on the shelf of toys above my work desk.
Posted by Bunche (pop culture ronin) at Tuesday, April 22, 2008

I saw that the other day on the Club Devo site http://www.clubdevo.com/mp/news_pgs/mcdevo_toy.html
Did you hip them to it?