ON THE "DEATH" OF BIG BARDA 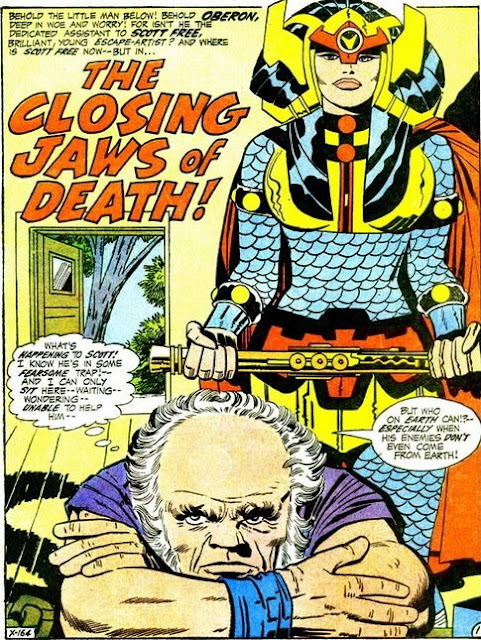 The past few years of continuity within the DC Universe have mostly been a colossal clusterfuck, with seemingly every idea, no matter how half-baked or straight-up bad, being deemed worthy of seeing print. The epic awfulness of 52 somehow shamelessly compounded by the even worse COUNTDOWN (at least 52 had the generally entertaining "lost in space" storyline featuring Adam Strange, Starfire, and Animal Man), Catwoman having a baby (talk about totally out of character), the horrendous Metal Men reboot, the downright offensive IDENTITY CRISIS, the execrable and insulting INFINITE CRISIS, Jeff Smith's loving but misfired take on the Captain Marvel mythos... I could go on and on, but I'll spare you. If you regularly check out the comics shops on Wednesdays you know what I'm talking about, and have probably contributed a few loud cries of "What the fuck are they thinking" to the air yourself.

For me, at least, keeping up with DCU books these days has been nothing more than keeping up with a long-loved soap opera during a long, dry period in hope that it will once again pick up steam, the only really rewarding segments of which have been GREEN LANTERN, the latest SUICIDE SQUAD mini-series, the fun-as-a-mofo BRAVE AND THE BOLD and ALL-STAR SUPERMAN (the only good Superman book currently going), and anything written by the completely excellent Gail Simone (her long and thoroughly entertaining run on BIRDS OF PREY before she left to give WONDER WOMAN a much needed shot in the scripting arm, and the criminally-underrated VILLAINS UNITED! and SECRET SIX), and considering how much product DC unleashes on a monthly basis you'd think that the odds of there being more worthwhile stuff to read would be considerably better. But everything seems geared to the next apocalyptic "event" series at the expense of good characters and storytelling, which brings me to THE DEATH OF THE NEW GODS.

As characters the New Gods are so inextricably tied into the quirky and cosmic sensibilities of their creator — do I even need to mention that they were the great Jack Kirby's first major creations once he left the Marvel Plantation, aka "De Big House uv Ideeyahs" — that I'm hard pressed to name any use of them since his departure from the company that's been any good at all, much less fun (Marshall Rogers' and Michael Golden's art on the late-1970's MISTER MIRACLE run being obvious exceptions). Attempts have been made in the comics, but each has fallen flat; the New Gods' brief appearances in the DCU cartoon shows of recent years were quite good, as well as true to the source (sorry, I couldn't resist), but I doubt we'll see them animated again any time soon. And while I found the infamous John Byrne ACTION COMICS two-parter from two decades ago, in which he had Superman and Big Barda mind-controlled into making porno, highly amusing for its sheer audacity, its only real saving grace was it being the one time Byrne drew Barda really well, both in civilian duds and her Valkyrie-meets-Cleopatra-on LSD battle gear.

And now we get THE DEATH OF THE NEW GODS, written and penciled by Jim Starlin, widely recognized as the industry's go-to guy for "cosmic," based on the classic work he provided on the only memorable runs of Marvel's CAPTAIN MARVEL and WARLOCK back in the tripped-out 1970's, the excellent graphic novel THE DEATH OF CAPTAIN MARVEL, THE INFINITY GAUNTLET, and his creator-owned METAMORPHOSIS ODYSSEY and DREADSTAR. The guy does epic space opera and handles space empires and godlike beings like no one else currently working, provided it's all his baby, and from what I gather this current mini-series that sees the various Kirby creations violently stripped of their godly essence through gory extraction via the chest cavity is not his concept; he's merely the best choice to marshal this latest march off the cliff of comics event pointlessness.

Not really giving a rat's ass what happens to the majority of the New Gods thanks to their mishandling, THE DEATH OF THE NEW GODS would barely have registered on my geek radar and might even have been welcomed with open arms had it not been for my girl Big Barda getting killed off at the end of the issue, off camera no less. (And don't get me started on the beanpole way Starlin drew her; she's got "big" in her name for a reason, as is obvious in just about any Kirby drawing of the character, so supplementing her height there should also be a certain amount of physical density.) 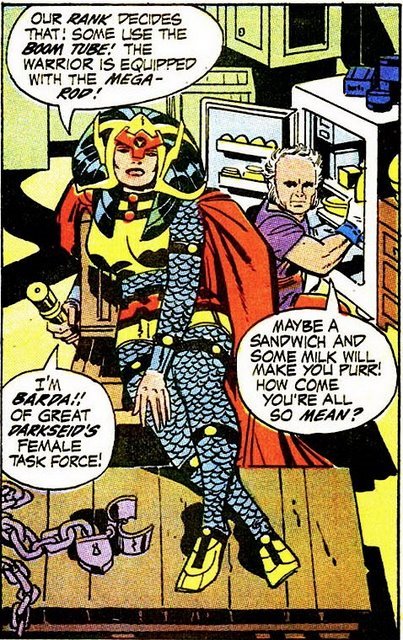 My love of Barda is a shock to no one and if it were up to me I would have had her go out in a knock-down, drag-out motherfucker of an issue-length fight sequence against a literal army of heavily armed foes, possibly leveling whatever setting the brawl took place in. The kind of carnage-laden comic that would make ass-whuppin' and destruction fans need to smoke a cigarette and kick back a shot of stiff liquor when the finished its final page, and letting them know without question that they'd been at the ringside for one of the greatest superhero battles of all time. 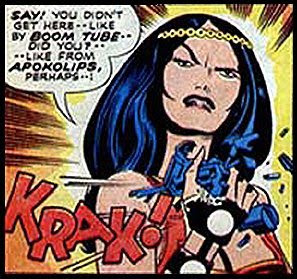 But NOOOOOOOOOOOOO. Instead we get a scrawny-looking drag queen in a Big Barda outfit, eviscerated on her kitchen floor's linoleum, freshly-purchased groceries strewn about the place.
That's just plain sucks the big veiny one, my friends, and it royally pissed me off. If you're gonna kill her off, let her die like the epically-writ warrior woman she was, not as some taken-by-surprise bit of canon fodder sacrificed in the name of all-important sales.

But, as seen in far too many examples to even begin to name here, death in the comics is famously impermanent, and I'm willing to bet that Barda will be back in some form or another. But what I wonder is if this mass slaughter of the New Gods is some kind of move that will allow the characters to either be rebuilt from the ground up or entirely done away with so as not to have to award Kirby's heirs any retroactive cash due from the shekels reaped by DC/Time-Warner from characters and concepts that sprang from Jack's fertile imagination, especially in the wake of the recent Superman rights case. If that sounds cynical to you, let me tell ya that the history of the comics biz is one long litany of creators getting the shaft, both commercially and creatively, by the big companies, with things only reaching a generally fair and moral level of creator compensation (royalties, ownership of characters they created) and recognition as of the late 1970's and early-to-mid 1980's. There are many recorded accounts of what went down in the days of work-for-hire, but the one I recommend as specifically relevant to the story of Jack Kirby is Ronin Ro's anger-inducing bio TALES TO ASTONISH: JACK KIRBY, STAN LEE, and the AMERICAN COMICS REVOLUTION (Bloomsbury USA, 2005); if you read this and you have any love and respect for Kirby, as I very much do, you will end up one irate son of a bitch.

But as far as the return of Big Barda, I'm curious to see what will happen. It'll probably suck — how do you improve on something that was done right the first time out, especially that outfit? — but if it were, once again, up to me, in the midst of the other rebooted New Gods striding forth, I'd have the Barda we know and love explode, butt-nekkid save for her slightly-worse-for-wear signature helm, from an active volcano (nudity discreetly covered by whatever is deemed necessary to appease the Comics Code), showering lava and burning rock all over the damned place, only to land and immodestly march out of the holocaust, vociferously griping about it taking her so long to kick the Spectre of Death's ass. After that she'd walk into the nearest pub, trailing drops of molten slag behind her, douse herself with the keg that she tore from the bar, creating a cover of steam as well as swallowing several hearty swigs, and then ask where the hell her husband's scrawny ass was.

Hey, the girl was born and raised on the volcanic world of Apokolips, so she could survive my scenario. Let's just see how she does against DC Comics... 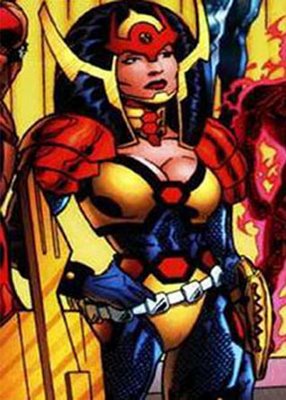 Rest well, Barda, until DC once more runs out of ideas and resurrects you.
Posted by Bunche (pop culture ronin) at Wednesday, April 02, 2008

I'm so sorry for your loss.

Barda should have gone out in GRAND FUCKING style so as to insure her a place in StoVoKor.

See this is why I haven't read a DC comic in ages. Fucking assholes.

Has there been a period in the past five or so years that the DC Universe WASN'T all mucked up in some "grand" "event" crossover? I'm one of those jaded, but still interested aging fanboys who still hits the comic shops, but rarely buys a freaking thing. It's sad, and looks like it ain't gettin' any better.