Well, it's that time of year again, and the New York Comicon is once more upon us. The assembled geekdom of the tri-state area and beyond will descend upon Manhattan's Jacob Javits Center from Friday, April 18th through Sunday the 20th in a living, breathing mass of myopia, questionable social skills, goofy costumes, and rabid fannishness, and I can't wait. I'll be there with bells on, covering a few of the events and panels in my capacity as a Publishers Weekly reporter/reviewer, and I hope to see many of you lovely maniacs there as well.

As the date of the con approaches I've been hashing out my plans to rendezvous with old friends and colleagues, some of whom I haven't seen in years and are coming in from overseas, but I also received a note from my friend Lexi — a willowy brunette with a fantastic ribald sense of humor, sharp intelligence, a knockout figure, and brown eyes that will stop you in your tracks — whose nearly three-decades-younger half-brother and sister want to attend the convention. She asked me for advice on the suitablity of the con for kids their age, as well as any logistical information I could impart, and after I sent her my response I decided to refine it for use here. What follows is the advice I would give to anyone who has never attended a comic book convention before, especially one as big as the New York Comicon and even more especially if kids are a part of the equation, so if you're thinking of going, please read all of this carefully and you will find yourself prepared for most eventualities. Comics conventions can be a lot of fun, but they can also be crazy, even for the seasoned veteran, so commit the following to memory and everyone will get out alive and in one piece.

THE "SOYLENT GREEN" EFFECT-one of the first things to consider with any kind of convention situation is that if you are interested in attending, then many others will also be attracted to the geeky fun, meaning that it's likely to be as crowded as a street scene from SOYLENT GREEN. 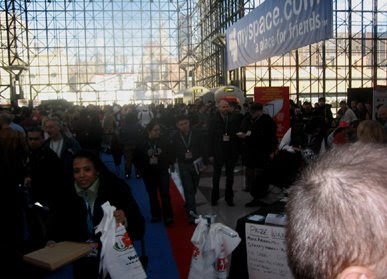 Inside the Javits Center at last year's show, and this is just the entrance!
'The extreme volume of people may be overwhelming to the newbie; hell, I've been going to conventions since I was ten and I'm still sometimes overwhelmed. But if you do decide to go, get your tickets asap and be prepared to wait on line to get into the venue. 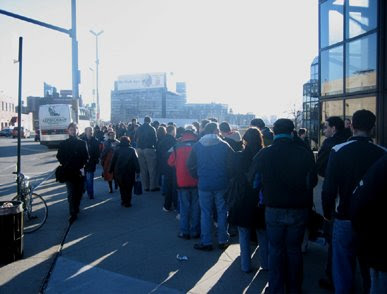 Outside the Javits Center at last year's show.

And if I were you, I would show up as early as possible on whatever day you plan on attending. The con grows in attendance each year and is now well-controlled, but keep in mind that when they relaunched the con two years ago it was poorly planned and the tickets were oversold, resulting in over ten thousand people being turned away at the door, including professionals who were scheduled to appear for signings and panel appearances. Such predicaments are now somewhat unlikely, but it's not outside of the realm of possibility, so be prepared just in case.

CASH FOR CRAP-as a grownup, it's up to you to determine how much cash you feel may be necessary to have on hand, but what's your kids' budget? Let me be absolutely clear on this: don't even go unless they each have a minimum of $100 to spend. Even the dinkiest of these
conventions is a cornucopia of cool shit that they'll want, and this is the biggest one on the east coast, so it just isn't fair to take them to one unless they have some usable scratch. There's also the food requirement, which the Javits Center has under control — a not bad food court — but it ain't exactly cheap; once you're inside, it's the only game in town and they know they've got you by the balls.

WHILE YOU'RE ON YOUR FEET-when cruising the floor it's advisable that the attendee have a reasonably-sized backpack for holding whatever stuff they may get, allowing for hands-free movement and avoiding one's arms getting fatigued. Bottled water and a handy snack or two are also advised, rather than having to shell out some insane amount of money for them. A camera is also a must; you never know what crazy outfits or celebs you may run into, so it's best to have something on hand to visually record the madness. Comfortable shoes are essential; you'll be on your feet for a few hours, so you'd damned well better have on a pair of shoes conducive to walking. And lastly, don't forget a book for autographs and sketches. A blank sketchbook is the best thing for this, easily obtained at any art supply store, and make sure to include a loose sheet of paper or cardboard to place under a page that will be
autographed in case the signer uses a pen that may bleed through the page; I've seen many sketches and autographs ruined by this, so always be prepared. And while some artists will do sketches gratis, they are rare, so be ready to spend a minimum of $50 per sketch depending on who the artist is. NOTE: unless you're willing to submit to a lottery selection process that determines a certain number of recipients and are made of money, don't even approach an Adam Hughes signing. The guy's a terrific artist, one of the very best out there, but when he charges a grand per sketch, I will pass, and, nice though it is, his signed deluxe color sketchbook goes for seventy-five bucks. I guess his prices are so exorbitant thanks to those ass-munches who don't give a shit about his art and are only looking for something they can flog on eBay. (I have many pages of original art that I've collected over the years, some that I purchased and some that were given to me by friends and former-colleagues, and I will never sell even one page of it, but that's just me.)

ARTIST'S ALLEY AND OTHER AUTOGRAPH ETIQUETTE-the space relegated to the creators and celebrity guests is a place where you can obtain sketches and autographs, and even chat with your favorite comics folk/movie/TV stars/assorted oddball media personalities, and it is here that you will see blatant and embarrassing examples of fandom at its worst. The inconsiderate dickhead who shows up with a longbox full of the entire run of THE SANDMAN — in duplicate, no less — and expects Neil Gaiman to sign and personalize every single issue, the "fan" who shows up solely to berate a creator for imagined (or not imagined, in some cases) talentlessness, creepy collectors who ask artists to depict their favorite characters dismembered and shoved into refrigerators (no, seriously), five-knuckle-shuffle masters who want porn stars to pose for pictures with the fan's face buried between their cans, and self-absorbed bores who take up the guest's time and force others to wait for an eternity until their pointless dronings eventually cease are just some of the garden variety annoyances who can ruin the convention experience for everyone, and you would do well to be as unlike them as possible. Remember that the guests are ordinary people just like you and they expect the same treatment that you would if you were in their place, stuck behind a table for hours on end signing whatever gets thrust into their faces, so remember your manners and be polite. Simple human consideration goes both ways, and you often get back what you give.

IF YOUR GROUP GETS SEPARATED-it's very easy to get lost in the tumult, so if you get separated from your party arrange for a place where you can safely meet up. I recommend taking an initial pass by Artists Alley so you all know where it is from the get-go, and suggest that the entrance to the Alley be your designated site for the rendezvous. The checkout at the food court is also a good choice, but if all else fails, find a convention staffer — always indentifiable by badges and t-shirts — and ask for assistance. They will most likely announce your plight over the PA system so those concerned will be able to follow instructions to a designated pickup location.

I'm sure I'm probably forgetting something, but those are the basics that immediately spring to mind. Please write in if you can think of anything I missed.
Posted by Bunche (pop culture ronin) at Monday, April 14, 2008

After that oversold debacle a few years ago, I'll never give those cocksuckers a cent of my money.

It's sad. NYC deserves a good ComicCon not run by a bunch of greedy gangster scumbags.

Have fun, though. Say hello to any mutual friends for me!

Great tips, Steve! Yesterday was surprisingly okay... I generally stay out of the main exhibition hall when I go to these things because I have movie related stuff to do elsewhere but I was able to walk around and even ran into an old friend I haven't seen in many years.