MY BEAT PIECE ON THE "GIRLS WHO KICK ASS" PANEL

As previously mentioned , I was eager to check out the "Girls Who Kick Ass " panel that was to be held on Friday night. Well, dear readers, I did just that and I wrote up the following piece for the Beat . What follows in the original finished version that I sent off to Heidi about fifteen minutes ago, so let's see how much of the following gets toned down for when it hits the general public:

An Embarrassment of Riches: Jenna Jameson, Amanda Conner, and “Girls Who Kick Ass” By Steve Bunche

4/18/2008-Is there any more tired panel that gets regularly dusted off at comics conventions than the totally-beside-the-point “women in comics” forum? When it comes to creating comics, and most other things for that matter, gender is irrelevant and the main factor to consider is the validity of the creator’s vision and intent rather than whether or not the talent possesses twig & berries or “the Holiest of Holies,” as Pulp Fiction’s Jules would put it. Honestly, I’ve long thought the only way to kick start some life into that moribund mainstay would be if I were to put on a taffeta ball gown, pad my bra a little — believe me, it wouldn’t take much — and haul my high-yellow tuchas onto the podium and began to rail on about how Stan Lee was an unsung feminist whose unknowing depiction of females was actually a subtle call for empowerment. Of course that’s complete and utter horse hockey, but then again so was the “Girls Who Kick Ass” panel at the Javits Center’s New York Comicon.

Billed as a sounding board for women in the funny books biz, the panel garnered a bit of controversy for its placement of former adult film star Jenna Jameson among the likes of Colleen Doran, Louise Simonson, and Amanda Conner. Jameson, a funny and intelligent speaker, is quite lively in her own right, but her presence was guaranteed to detract from the other panelists and attract a legion of devotees of “one-handed” cinema, many of whom couldn’t have cared less about the creative process of comics and paid their admission fee in hopes of worshipping at Jameson’s tenderloin flick altar. I have absolutely no problem with Jameson’s porn past, in fact I’m a staunch advocate of such fare, but the inherent sensationalism that comes with her simply doesn’t jibe with a panel aimed at women being taken seriously in the medium. No matter how sincere her intentions may be, the vast majority will most likely not be able to embrace Jameson in any real capacity as a creator and see her as anything other than a “tainted” woman who splayed her naughty bits on camera for the, er, amusement of folks living in a hypocritically anti-sexuality culture. Just ask Traci Lords.

Scheduled to start at 7PM, the panel didn’t get underway until nearly a half hour later for no adequately explained reason. While not packed, the hall was dense with fans of Jameson’s video output, curiosity-seekers, and about twenty or so comics enthusiasts who actually showed up to hear what the panelists had to say, and as the minutes dragged on past the announced start time there was a palpable anticipation permeating the atmosphere. Would the discussion be a train wreck of epic proportions, or would the panelists rock the audience’s collective world with gems of unforeseen profundity? Sadly, the event turned out to offer neither thanks to Simonson and Doran bailing for unknown reasons, leaving Amanda Conner as the sole voice of comics biz legitimacy at the mercy of an audience that for the most part didn’t care about what she may have had to say and the three would-be humorous handlers, presumably connected to Jameson, who were annoying in that “God damn it, I want to punch you until you scream” way popularized by that towering douchebag Ryan Seacrest.

When Jameson finally showed up, dozens of camera-wielding arms thrust up, bringing to mind a more desperate analog to the paparazzi that trail Paris Hilton. When the horn dog contingent got over its photographic priapism Jameson and Conner took their places at the dais and waited while the would-be Seacrests thrilled the audience with a clip from Jameson’s new movie, Zombie Strippers, a film that looked like exactly what one would expect from a film with such a trite title. Thankfully, the clip was over quickly and the panel proper got started. Jameson played to the crowd, attempting to win them over with her professed confusion over the status of the term “fanboy” as a pejorative. There to shill both Zombie Strippers and the comic book that she supposedly created — Shadow Hunter, a book that looked to me like yet another entry from the school of Witchblade knockoffs — Jameson displayed far more passion for and knowledge of horror movies than she did for comics, quite obviously betraying an ignorance of the medium and allowing Conner to field most of the questions relating to the stuff that the real fans and creators would know and understand. 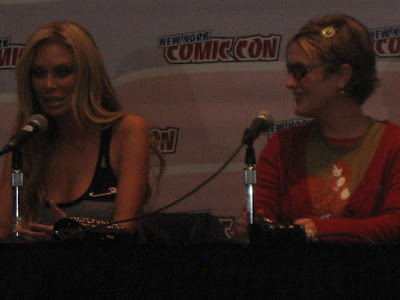 When describing her collaboration with Shadow Hunter’s scripter, Witchblade co-creator Christina Z, it was apparent to many in the audience that Jameson most likely had never even spoken to the writer, at which point what little credibility Jameson had built up with the comics cognoscenti present rocketed down the proverbial bowl. Swiftly attempting to regroup, Jameson then elaborated about the political undertones found in Zombie Strippers, declaring her role in the movie was great because she got to “eat a man’s penis off.”

As you can no doubt judge from that off the cuff remark, there was little prudery involved in the discussion — although the Seacrest brigade did caution the audience to keep things somewhat clean — but the real shame of the event was that Conner has a fabulously smart, ribald and downright prurient sense of humor that could more than easily have matched Jameson’s japery note for note, but the majority of the crowd was there for Jenna and they would have willingly sat there with rapt attention while she read aloud the label on a box of Ex-Lax. Conner’s efforts were valiant, but, for all intents and purposes, for what may have been the first time in her life, Amanda was the smart, talented, and funny wallflower in the eyes of a room full of wolves sniffing around the dance’s popular “hot” girl in a futile omega mating display.

When the event finally ended, it was as though a silent voice had said, “And now…GO!” at which point the dais was swarmed by joystickers with their cameras at the ready, each seeking a shot of or with Jameson. I went up and sat next to Amanda and chatted with her as the scene began to resemble the famous POV shot from the original Night of the Living Dead in which the grasping arms of hungry zombies jutted through the heroes’ makeshift barricade of pitiful two-by-fours. Realizing I would probably have to wait for at least an hour to get a shot of Amanda and Jameson together, I asked Conner to tap Jameson for a quick snap of the two of them, after which I left the hall to go get smashed with the crew headed down to Garth Ennis’ local.

So did this forum contribute anything to increasing the awareness and credibility of females in the comics biz? Despite Amanda’s best efforts, I have to answer that question with an unequivocal “no,” and I have to say the whole thing would have worked a hell of a lot better by catering to Jameson’s fan base and not attempting to get the comics fans into the dubious mix. I’m a fan both of adult film industry women who are comfortable with and in full charge of their sexuality (retired or otherwise) and comics as an art form, but in this particular instance the attempted meeting of those two worlds amounted to naught but something that could have been launched via a late night infomercial, leaving the actual comics professional out of the equation altogether. 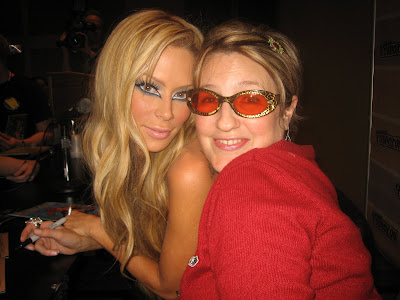 Poor Amanda! No wonder Collena and Louise bailed - they knew what they were in for! Amanda gets serious props for being game enough to meet her committment to the con committee... who - if there's justice in the world - were probably off in a corner being blugeoned to death by Colleen and Louise. Gee, and folks wonder why "fanboys" is still synonomous with "social reject"!

20 years ago I sat on panels at conventions all having various titles indicating "Women in Comics." My colleagues included, at one time or another, Colleen Doran, the late, GREAT Kim Yale, Heidi MacDonald, Louise Simonson, Karen Burger, Trina Robbins, Marie Javins, Jo Duffy and so many others.

20 years later they are still holding the same bullshit panels...the industry will never change...the inclusion of Jenna James only confirms that for too many of the comics fans out there, creative women in the comics field are judged only on the fantasies they incur as sweaty palms reach between their legs and jerk up and down while they drool over Power Girl's breasts.

I wasn't there because of Passover, but kudos to my friend Amanda Connor for trying to bring some semblance of professionalism to the panel. Unfortunately, it's a losing cause, Amanda.

The only thing that we women can do is to continue to create comics springing from the deep wells of talent and creativity and love of the form, not to satisfy the fans, but for ourselves.

Which is the important thing, isn't it?