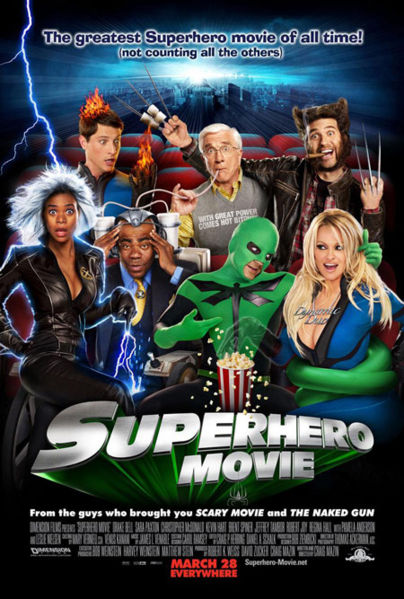 From the genre of "point and click" humor that spawned DATE MOVIE, EPIC MOVIE, and MEET THE SPARTANS, but thankfully not made the same group of talent-free fucksticks who made those abortions, comes SUPERHERO MOVIE!, a film that while nowhere near as bad as its predecessors still pisses me the hell off for a number of reasons.

SUPERHERO MOVIE! attempts to parody the whole of the titular genre while sticking close to the basic plot of the first Spider-Man movie, and while the script would seemingly benefit from actually following a coherent plotline, the film hews so closely to Sam Raimi's SPIDER-MAN that it's pretty much a scene-for-scene remake, only with a ton of sub-par jokes thrown in. Just take the SPIDER-MAN script, cross out "Spider-Man" and replace his name with "the Dragonfly" and there you have it. There are also brief nods to BATMAN BEGINS, the Fantastic Four movies, and the X-Men flicks, but those bits are there solely so the writers can say they "parodied" more than just SPIDER-MAN, and they offer only the slightest diversion from the "been there, done that" proceedings. The jokes are so feeble that while sitting through the film I actually wondered if I was supposed to be laughing; for my money there were exactly two sequences that made me laugh, one involving the downside of being the Human Torch and the other involving Marion Ross (Mrs. C. from HAPPY DAYS) in the Aunt May role farting like an extra from BLAZING SADDLES' campfire scene, creating such fouls chuffs that the Mary-Jane character reaches into her purse and pulls out two tampons which she immediately stuffs up her nostrils as a makeshift air filter. And those bits weren't hilarious by any means but when a film that's supposed to be a comedy gives viewers nothing to laugh at or with, you'll take whatever paltry scraps of humor you can find.

What offends me most about this film is the degree of laziness on the part of its creators insomuch as they basically expect us to pay for a barely feature-length remake of a far superior film, and deliver virtually no entertainment value. DATE MOVIE and MEET THE SPARTANS were both balls-out terrible but DATE MOVIE is at the very least fascinating in its awfulness, providing a textbook example of exactly how not to make a comedy, while MEET THE SPARTANS was simply so awful that I found it hilarious in parts thanks to the sheer balls it took to put such an epic mess onto the screen. I can offer no such dubious praise to SUPERHERO MOVIE! and, much like EPIC MOVIE and MEET THE SPARTANS, I'm glad that I didn't waste what would have been twelve (!!!) bucks to see it in a NYC theater, instead seeing it via a reviewer's copy DVD. With the galloping horseshit spewed forth from this "references rather than jokes" school of humorous cinema making shitloads of money thanks to an audience that clearly doesn't care about the contempt that these alleged filmmakers so blatantly have for them, the end of this trend is nowhere in sight, and if not for the efforts of the likes of Judd Apatow and Tina Fey, I would almost be ready to say that American comedy is dead, positively tits up and rotting, with maggots crawling from its fetid asshole. Where once we got stuff like YOUNG FRANKENSTEIN, THE KENTUCKY FRIED MOVIE, NATIONAL LAMPOON'S ANIMAL HOUSE, and even BACHELOR PARTY, we now get this, and that, dear readers, makes me weep. TRUST YER BUNCHE and skip this turd. Although do check out MEET THE SPARTANS when it hits cable. If you, like me, thought 300 was crap, you may have fun with MEET THE SPARTANS in the same way that it was once fun to play with dog shit by flinging it at other kids with a stick. C'mon, you know you did that...
Posted by Bunche (pop culture ronin) at Monday, April 28, 2008

You are so right about these "comedies" that are being shat out of the studio's assholes nowadays. You forgot to mention the Scary Movie series as well. All of these movies owe their existence to Airplane! , the one that really popularized the whole genre parody concept. Except where Airplane and the like were funny, these films now maintain a "throw the lot against the wall maybe some bits will stick" approach that is lazy, unimaginative and treats the audience like a group of ten year olds. Then again, they may not be wrong underestimating the audience.

I just want to say thank you for hating 300. I was starting to think I saw a different movie than the one everyone else did, because the one I saw sucked miles of ass.