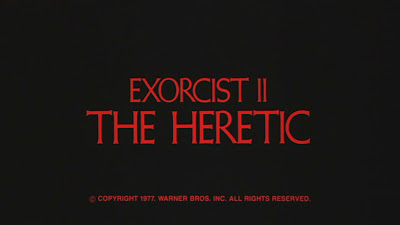 A portent of impending scares, or an invitation to yucks? You decide!
One of the universe's greatest truisms is that whenever anything is successful, a sequel is inevitable, so when William Friedkin's adaptation of William Peter Blatty's THE EXORCIST (1973) raked in the samoleons at the box office (over 66 mil in early-1970's dollars, and that ain't hay!) it was only a matter of time until a followup graced the screen. But any sequel to THE EXORCIST would have been a daunting task; how to follow an instant classic that shattered onscreen taboos regarding language, religious improprieties (Ouch! That crucifix!), and truly creative cussing while maintaining the high standard of quality set by the original would have proved daunting to any writer or director, and as per the nature of sequels one would assume that the general public would have been expecting more of the same, perhaps with the blasphemous ante being cranked up a notch or two. So what to do in order to meet the public's expectations and make an assload of box office at the same time?

The answer to that question cannot be found in 1977's EXORCIST II: THE HERETIC, a literally unholy mess of a film whose reputation as possibly the single worst sequel in major motion picture history seems pretty much set in stone.

Helmed by world-class oddball director John Boorman, the guy who gave us the jaw-dropping Sean Connery vehicle ZARDOZ (1974), EXORCIST II: THE HERETIC unwisely chooses to focus on the possibility that Reagan McNeal (Linda Blair, reprising the role that made her famous) may still harbor memories of the excruciating details of her exorcism some three years prior to the events of this film. Sent by the Vatican to dig up all the necessary dirt while investigating the death of the priest who performed Reagan's excorcism — Father Merrin (Max Von Sydow, reprising his role as a much younger version of his character in the original film) — Father Philip Lamont (Richard Burton, looking and acting like he's in the midst of a week-long bender)
journeys to Manhattan where a high school-aged Reagan lives and volunteers at a bizarro clinic that helps the mentally ill/challenged. The place is run by Dr. Tuskin (Louise Fletcher, here pulling a total one-eighty from her Oscar-winning role as Nurse Ratched in ONE FLEW OVER THE CUCKOO'S NEST), who breaks out this trippy-looking strobe light and bio-feedback headsets that looked like something you'd have found in a head shop at the time and uses it to hypnotize Reagan into remembering her forgotten experience of demonic possession. That turns out to be a bad idea because the second Reagan's fully under she starts sounding like Lucille Ball during her autumn years, her face gets all evil and fucked-up-looking, and the demon identifies itself as Pazuzu, a malevolent ancient Assyrian wind spirit and "one of the lords of the air." 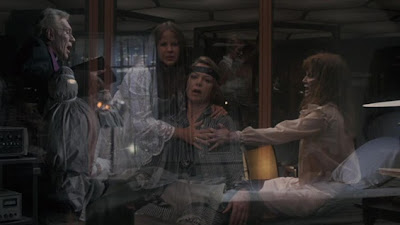 Whoa, dude! Trippy! But not scary.

As of that point the film nosedives into a nigh-incomprehensible mess of questioned faith, misguided attempts at psychedelia, bullshit psychobabble, flashabcks to Father Merrin's first exorcism, all manner of bizarre mystic visions and mumbo-jumbo, accented with Linda Blair performing in an utterly awful chorus line production of "Lullaby of Broadway," and the unforgettable sight of James Earl Jones as an African holy man in a ridiculous locust costume. It all culminates in a confusing fistfight between Father Lamont and Pazuzu in the form of Reagan's evil twin, a bought settled when the good Reagan arrives and fends off a swarm of demonically-controlled locusts by imitating the movements made by Jones' character during his youth as he used a bull-roarer to drive the evil bugs from his village, all while father Lamont literally tears out Pazuzu's heart. 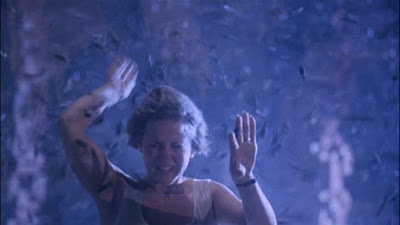 Now this is what the audience craved to see: Linda Blair battling locusts.
A lot more crazy shit happens, and if any of this sounds coherent, let me assure you that it isn't. When I first saw EXORCIST II: THE HERETIC during its network television premiere — the night after THE EXORCIST, so the edited-for-TV version of that was fresh in my mind — I watched it with my mom, and the two of us nearly laughed ourselves to death. To this day we can still crack each other up with random quotes from the film ("Pazuzu will help me find Kokumo!!!"), and while it is an unmitigated turd storm, I must confess to finding it entertaining as hell, and loaded to the gills with visuals that bring to mind Alejandro Jodorowsky in his more accessible moments. Boorman's visual imagination was given free reign, and the film is replete with beautiful and bizarre imagery and gorgeous cinematography. Too bad there wasn't a script good enough to properly complement Boorman's vision.

Perhaps the saddest thing about EXORCIST II: THE HERETIC is that when it is carefully examined, there are the building blocks for what could have been a genuinely good and scary film that could have used the original flick as a starting point and really run with some of the story's themes. My two major points on this are as follows:
So, yes, EXORCIST II: THE HERETIC is a spectacular misfire, but there's too much good material to be found amidst this cinematic dog's breakfast to fully write it off as one of the worst films ever made. I've certainly seen far worse, both from low-budget schlockmeisters like Al Adamson and from the major studios, and unlike many other bad films, at least EXORCIST II: THE HERETIC entertained the crap out of me, something I cannot say about would-be blockbusters like SKY CAPTAIN AND THE WORLD OF TOMORROW, PEARL HARBOR, or LIVE FREE OR DIE HARD. Give EXORCIST II: THE HERETIC a second chance, and this time while you're laughing take note of the cool shit it possesses (sorry) and grieve for could have been a glorious entry in the horror genre. 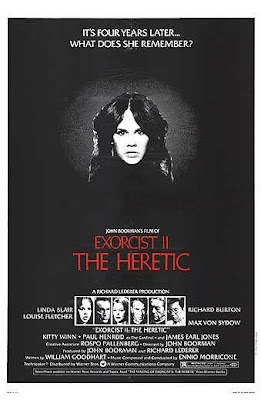 This was a film that both original Exorcist author William Peter Blatty and original "Exorcist" Director William Friedkin were 100% against.

For the REAL sequel of the Exorcist please read "Legion" by William Peter Blatty. That was later turned into a "Major" motion picture "The Exorcist III" starring George C. Scott in the lead roll of Lt. William 'Bill' Kinderman and it was also directed by author William Peter Blatty himself. While slow moving and deliberate it did hold the most suspenseful moments to date in cinematic history. I still can't get the timing right and still jump at the climax of the scene. Then one must forgive because having been directed by an Author it would stand to reason that the pace would follow the same pace as if it had been unfolding upon the pages of a novel. Not too movie friendly for someone who's only investing about 2 hours of their life in the movie version. Still it one of those movies you come to appreciate more and more with the passage of time.

Let me get back to a prior point: both William Friedkin and William Peter Blatty were against the Exorcist The Heretic for the main reason that it dragged Reagan McNeil into the story again. She should have been long free, but Hollywood being what it is will always drag the "familiar face" back into things hoping to make the "familiar" money.

The reason Reagan should have been 100% free is because the possessed receive a special grace not to remember the events during their possession. I know this because I am very familiar with the Demonic and the Rite of Exorcism. (Please see Episode 7 of The Mr.Joe Catholic Show which you can find here: http://mrjoecatholicshow.com/2008/01/17/episode-7--whos-yer-daddy.aspx

All in all if you want a good read pick up The Exorcist by William Peter Blatty and Legion as well. There's a certain sadness in Legion (both film and movie) that I've always loved. You won't be disappointed.

One thing I've always loved is that Fr. Gabriel Amorth's (He's the Head Exorcist in Rome) favorite movie has always been The Exorcist. If that's not a quality "Thumbs UP" I don't know what is.

Since you mentioned the edited versions, i may have posted this before, but i will reiterate that THE BEST editing switch to public airwave friendly dialogue EVER occurs in the version of the exorcist aired on USA's up all night in which the line "your mother sucks cocks in hell" is changed to a far more mother friendly "your mother knits socks that smell". Hey, that's my mom your talking about there missy...
-big mike

For various reasons, I found myself recently watching the old Hammer caveman stinker "When Dinosaurs Ruled the Earth." (Now on DVD as "CAVE GIRL - When Dinosaurs Ruled the Earth"... which actually is a more honest title!) And y'know what? As hilarious as certian moments of that movie are, it's still WAAAAAY more entertaining and fun than this spring's mammoth turd "10,000 B.C." Sure, it's got a Playboy playmate falling out of her fur bikini, rubbery dinosaurs that facillate between stop-motion and lizards with fins, and some amazingly well-groomed cave folk (a feature of the more recent film as well). For all of that, though, I could see that the folks behind "Dinosaurs" were at least TRYING to make a fun film. "10,000 Bullshit Cliches" was cynical poop of the lowest magniturd. And personally, I'll take a promising-but-overreaching" bomb over a "directed-by-committee-big-budget-crapper" any day! Sounds like "Heretic" was a bit of both.