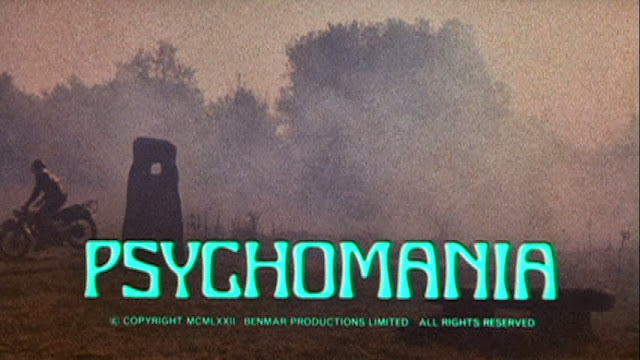 Welcome to the 2013 edition of 31 DAYS OF HORROR! I'm back with more classics, not-so-classics, oddities, and downright turds from the annals of cinematic horror, so strap yourselves in as we work our way to the best day of the year, namely Halloween!!!

Due to my personal boredom with the media ubiquity of the undead over the past decade or so, I admit I've neglected zombie flicks in my annual Halloween horror movie roundup. Being completely fucking sick of the shambling hordes of flesh-hungry brainless ghouls, I sought out something a tad...different by way of a zombie offering. Thus I break out PSYCHOMANIA, the 1972 cult favorite by director Don Stark that fuses the biker genre — which was popular in Britain but bore a completely different flavor than our own grungy, American homegrown variety of the form — with black magic and the undead. That said, PSYCHOMANIA, also released as THE DEATH WHEELERS, is certainly not a garden variety zombie movie, and therein lies its unique appeal.

Young Tom Latham (Nicky Henson) is a smug and privileged asshole of the highest order who happens to lead a motorcycle gang called the Living Dead, all of whom are instantly identifiable by their over-sized helmets that rock a visually-impressive skull motif. He and his pals ride around causing all manner of mayhem that's more annoying and anti-social rather than outright evil or violent — this being the Britain of the early 1970's, I would not expect something like what's found in movies like SATAN'S SADISTS or THE BORN LOSERS — and the police and locals hate their fucking guts but don't do much about them. It's implied that Tom's douchiness stems from his fascination with the mysterious death of his father, who apparently met his fate while dabbling in the black arts, and now Tom wants to barge into the mysterious locked room in his mother's inner sanctum, certain that he can succeed where his father failed and obtain the secret of eternal life. Oh, did I not mention that his mother (Beryl Reid) and her butler/companion (the great George Sanders) are hardcore occultists who command actual magic and hold real-deal seances for grieving families? (They do this as a not-for-profit public service, so at least there's something redeeming about them.)

Upon braving the mysterious room, Tom emerges with the secret of eternal youth, which he immediately shares with his understandably skeptical gang. In order to gain that power, one must make a Satanic pact — in this case made by Tom's doting and rather witchy mother — and then commit suicide by whatever means available, only one must be absolutely secure in the belief that one will rise again. Undaunted by his gang's lack of faith in his plan, Tom offs himself by driving his bike off of a bridge at high speed into a river, and is buried by his gang in full leathers and helmet while perched atop his motorcycle. 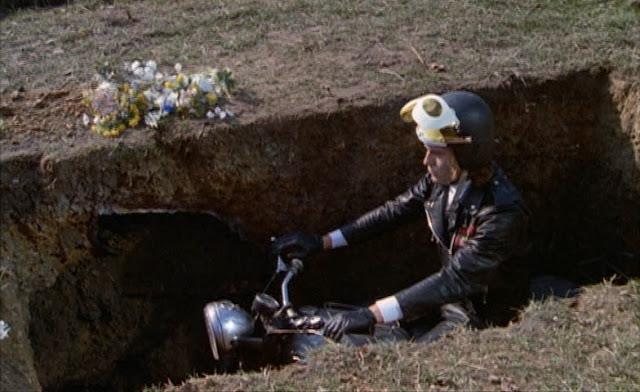 The recently-deceased Tom (Nicky Henson), getting buried in style.

Perhaps a day or two thereafter, in what is probably the film's most memorable image (it was certainly the one all the kids I knew who saw it on TV during the 1970's talked about incessantly), Tom rockets out of the grave on his bike in broad daylight, covered in sepulchral earth, and immediately commences a campaign of mayhem by running over a totally innocent victim just for the thrill of it. When he reemerges to his stunned gang (of course after calling his mum's house to let her know he's back and quite well), Tom, having proven he was not full of shit about Satanic resurrection, sweetens the deal by letting them know "you can only die once," meaning that one of the perks of of the process is un-killable immortality. (And also, apparently in one instance, a modicum of superhuman strength.) Upon hearing that, the gang's distaff second-n-command excitedly exclaims, "Oh, man! What are we waiting for?!!?" and in no time kills herself and joins Tom's free-wheeling string of undead acts of mischief that becomes more and more murderous with each incident and with a flustered local police force unable to do a damned thing to stop the Living Dead once most of them follow Tom's suicidal and downright diabolical lead. (Some don't quite have enough faith in the process, so they don't make it). The sole exception to this is Tom's sweet girlfriend, Abby (Mary Larkin), who sees the evil in Tom and their cohorts and just can't bring herself to commit suicide and join in on something so unholy and, well, just downright rude. But the question is this: Just how does one quash a reign of terror committed by a pack of merry sociopaths who simply don;t give a fuck about the law and cannot be killed?

PSYCHOMANIA is a black comedy played utterly straight in that way that only the British can achieve, so one could easily be forgiven for thinking that the film is serious upon seeing its poster and trailer. Tom's character is conceived as a study in post-A CLOCKWORK ORANGE McDowell-esque likable sociopathy/assholism,  and the antics of his gang probably seemed quite shocking to the pre-punk British mores of its era. Undead obnoxious oiks riding around on motorbikes with their state of immortal zombie-hood granting them that much more entitlement to be a pack of rude, childish dicks would be anathema to any right-thinking resident of the U.K., and they totally know it, even taunting the authorities with "What are you gonna do, kill me?" In short, it's a very British take on uncheckable motorbike delinquency as filtered through a horror movie context, social satire that's more eerie than actually scary.

Bottom line on this one: If you're expecting genuine scares, you should look elsewhere, but if you're looking for the blackest of offbeat black comedies, definitely give this a whirl. The scenes where the gang members kill themselves after seeing the proof of resurrection are very funny and the bit where one of them cheerily wakes up in the morgue, much to the gobsmacked shock of one of the medical examiners, is priceless.

Oh, and as previously stated, this film has rather a strong cult, mostly for the delinquent biker angle but also for its loopy nature. It's imagery can be found on t-shirts, leather jackets, tattoos, and even in a 1986 tribute song by one of my Top 5 favorite bands of all time, The Damned, so put that in your pipe and smoke it! 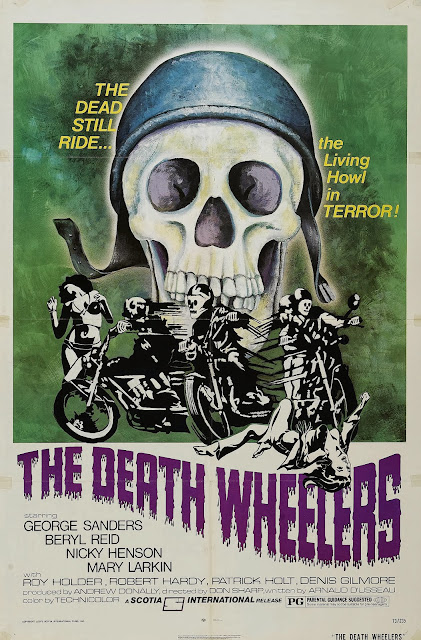 Poster from the original theatrical release with the original title.
Posted by Bunche (pop culture ronin) at Tuesday, October 01, 2013

There was also a nod to this film in the Motorhead video for Killed By Death, with Lemmy Kilmister roaring out of his grave atop a hellish motorcycle.