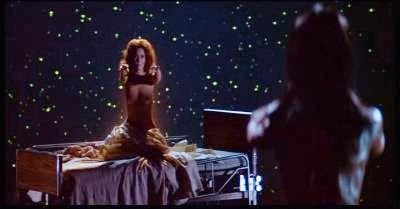 When ancient Native American sorcery meets the 20th century, it's time for some '70's-style psychedelia!

Semi-fraudulent psychic Harry Erskine (Tony Curtis) makes a good living by using his gifts to serve as a paid living horoscope for a clientele of dowagers in San Francisco, but his world is turned upside down when a dear old flame named Karen Tandy (Susan Strasberg) turns up on his doorstep and requests his aid. Understandably concerned, Karen has found that a tumor is swiftly growing on the back of her neck and all medical testing concludes that the growth is actually a fetus. Accompanying that startling revelation are instances of Karen repeatedly uttering a strange phrase in her sleep, the same phrase being spoken by one of Harry's aged clients who appears to be possessed (she does a ritualistic dance and floats two feet off the floor and down the hallway before she throws herself to her death down the apartment building's stairs), and the tumor actively defending itself from removal by controlling the scalpel-wielding hand of the attending surgeon and lethally manipulating a surgical laser in an operating theater full of physicians.

Realizing that the issue of metaphysical rather than mundane illness, Harry enlists the aid of fellow spiritualists who point him toward Native American shaman John Singing Rock (Michael Ansara, aka Kang from STAR TREK and former husband of I DREAM OF JEANNIE's Barbara Eden), who informs Harry that the tumor is in actuality the spirit — or "manitou" — of Misquamacas (Joe Gleb), a 400-year-old shaman who seeks to once more become corporeal so he can visit righteous vengeance upon the white man for the long list of atrocities committed against the red man. This Misquamacas is a spirit commanding vast maleficent power and he's extra pissed-off because the X-rays used to examine him have warped his regenerating form, rendering him stunted and hideous, so Harry and Singing Rock have their hands seriously full in a race against time to both stop the ancient horror and save Karen before Misquamacas's regeneration kills her. (Plus, not to mention the fact that the fate of the nation hangs also hangs in the balance.)

Even five years after all the hoopla, THE EXORCIST remained a viable go-to film to attempt ripping of in hope of cashing in on the "devil junk" zeitgeist that swept the country at the time, and THE MANITOU, though not the flagrant knockoff that many of its contemporaries were, definitely fit the bill. It also added a little extra spiritual spice by throwing Native American mysticism into the mix. The acceptance of and interest in non-Judea-Christian spiritual/mystical thinking and practices that flourished with the counter-culture movement of the 1960's carried over into the 1970's, which also coincided with all manner of paranormal freakiness, cryptozoological mania, and even the martial arts boom — which engendered curious embracing of Asian "mumbo jumbo" — as well as the re-discovery of the works of pulp horror writer H.P Lovecraft and his concepts of shapeless horrors so vast and terrifying that the mere thought of them would drive mere mortals stark raving mad. Thus,  THE MANITOU and its Mulligan stew of those elements and influences would have been perhaps the perfect distillation of post-EXORCIST 1970's horror...had it not been the baby of hack director William Girdler, the man who gave us DAY OF THE ANIMALS, ABBY — the infamously awful  blaxploitation clone of THE EXORCIST — and the cheesy JAWS ripoff that was GRIZZLY (1976). Working from a novel by U.K. horror novelist Graham Masterton, Girdler crafts a film that looks, feels. and plays out like a '70's-era made-for-TV movie, which is unfortunate because the ideas it presents are simply too grand for a film of its meager means. Though its setup is rife with potential, the film takes a very long time to get going and has such a made-for-TV flavor that its scene transitions seem ready to flow right into commercial breaks. (In fact, I dare say the film got more attention after its initial theatrical run in perpetual rotation on local TV stations than it ever did in theaters, so that aspect is somewhat ironic.)

However, it's not a total loss. Slow-moving though it is, and possessing a climax that almost seems like a tossed-off afterthought, the narrative does have a sweet love story between Harry and Karen that reveals the psychic to be a man of deep feeling and concern for his lover, so we do care about him and his quest. Michael Ansara's also fun as a late-20th century shaman, and the script has the decency not to make him just another rote "noble savage" stereotype. But to me the most interesting thing about THE MANITOU is its Lovecraftian aspect, including the concept of a formless and very evil "great old one" that backs Misquamacas, and the moment when the disappointingly brief showdown between good and evil manitous goes cosmic, causing Karen's hospital room to become a doorway to some sort of infinite void that exists in a dimension apart from our world. The imagery of her bed floating in a limitless star-field while within a hospital room is quite trippy, and the idea of the the manitous found in machinery being channeled through the body of Karen, thus also evoking primal female magic, is both intriguing and right in line with some of the areas of mysticism being popularly explored at the time of the film's release. 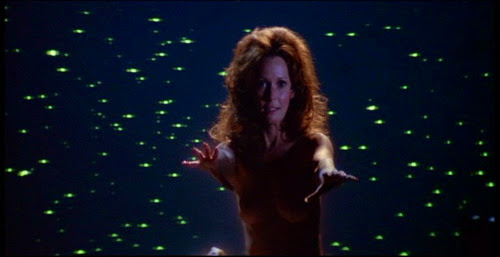 But no amount of good ideas can fully win out when trapped in a film that is otherwise governed by mediocrity. THE MANITOU is worth sitting through as an acceptable time-waster and is fondly remembered, and perhaps even beloved, by many who saw it during their childhoods, but it comes up rather lacking when seen from an adult perspective in 2013. See it for the sake of completism if you must, but you won't really miss much if you opt to skip it. 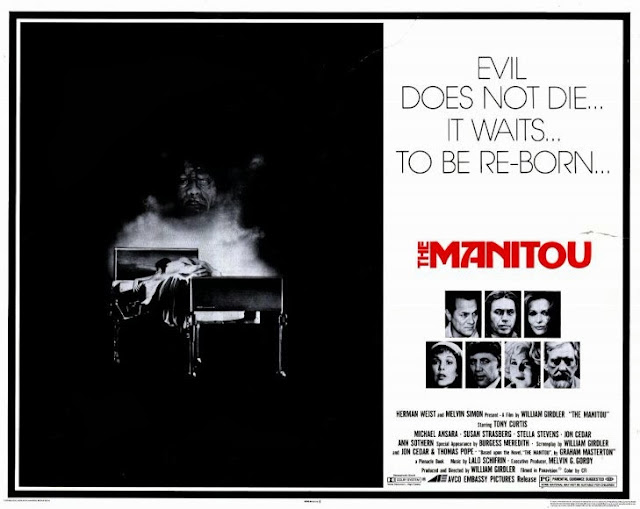 A few years after this film was released, the director William Girdler died in a helicopter crash while location scouting. Coincidence?