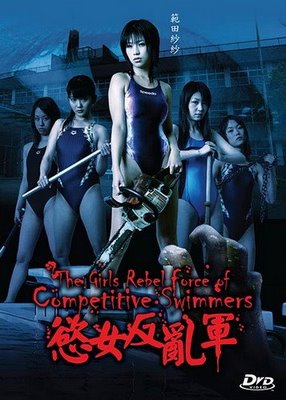 I really should listen to my own advice more often, namely my oft-mentioned caveat that if the poster and title are irresistible, the film itself is likely to be something of a disappointment (a hard-learned lesson proven by about thirty years of Troma Films). You know and I know that nobody — and I do mean nobody — makes gratuitously ultra-violent exploitation movies like the Japanese, and this sleazefest from the Land of the Rising Sun theoretically has everything going for it: shameless sleaziness, teen sexual curiosity (read "lesbianism") of a possibly incestuous variety, a mad scientist who conducts experiments of an insidious and pointless nature, cute Japanese chicks wandering about either clad in swimsuits or topless/nekkid, a ludicrous script, and scads of spewing gore, entrails and dismemberment. So what the fuck went wrong?

The plot: Hot schoolgirl Aki (Sasa Handa, who looks like a Japanified version of my pal Xtina, something obvious in the film and not the above publicity shot) couldn't possibly have chosen a worse day to start at a new school thanks to arriving just as a mad scientist injects most of the student body and faculty with a serum that will allegedly protect them from the "popular" virus that's debilitating the area. Y'see, the serum's real purpose is to turn its victims into homicidal cannibals, so once it's active the gore starts a'spewin', including a juggling math teacher zombie who literally saws off a student's head in front of his understandably stunned class, a bespectacled English teacher who lets loose her inner slut and gets off on cutting off the Principal's toes one by one, and dozens of uniformed schoolgirls committing all manner of atrocities upon one another. During all of this mayhem we discover that there's something in the school's swimming pool's chemiclas that renders the swim team immune to the serum, and Aki is befriended by Sayaka (Yuria Hidaka), a cute and kinda chunky chick who has birthmarks on her breast and neck that mirror those on Aki, leading to the inevitable question: are they long-separated sisters? Taking refuge from the marauding flesh-eaters/sadists, Aki and Sayaka hide out in the school's kitchen where they succumb to some not-bad manual lesbian tomfoolery (made hotter by the possibility of them being twin sisters; ooooh, so forbidden!), after which Aki reveals the details of her shocking past. It turns out that the same mad scientist who dosed the school kidnapped her years earlier and trained her to be a world-class assassin (his motivation for this remains obscure thanks to the somewhat dodgy subtitles), as well as conditioning her to get bitch-in-heat horny whenever she hears a tune he plays on a flute, thereby making her his easily-controlled sex slave.

So far so good and sleazy, right? Well, right about the middle of the proceedings things slow down to an alarming degree, almost as though another director stepped in and decided the flick needed more exposition rather than unchecked helpings of geysering blood, entrails, and gratuitous nudity. That's a very bad move that renders the remainder of the film a real clock-watcher as the audience sticks around solely to see how it all turns out. Since the film drops the ball in such a huge way, I'll spare you having to sit through this and tell you all of the stuff you need to know, clearly illustrating just how badly the filmmakers fucked over their intended audience:
The one saving grace of the film's ending is Aki unexpectedly vanquishing her rapist by blowing him to showering chunks using a laser device that she'd cunningly hidden within her pussy (yes, you read that right). The image of a splayed-out, totally nude girl shooting a STAR WARS-style ray out of her naughty bits made me laugh out loud and almost made up for the boredom and disappointment of the preceding thirty-or-so minutes, but the film's climax proved a huge letdown as Aki cleanses her gore-drenched self in the swimming pool, only to die from the Genie Narcotics. As Aki splutters and coughs while the poison kills her, the camera returns to Sayaka's corpse and shows us a warning on the narcotics bottle's label that warns against using the product in direct sunlight or water, so Aki was double-fucked from the get-go and ends up floating face-dwon and naked in the pool, like a giant "floater" turd. THE END.

This probably all sounds much better than it actually plays out but I assure you that you'll be disappointed by it should you choose to sit through it, unless you're an eleven-year-old boy who's just hit puberty and have never seen a George Romero movie or a bare tit. TRUST YER BUNCHE and give this brilliantly-titled half-a-hard-on of a movie a miss and check out the vastly superior THE MACHINE GIRL instead.
Posted by Bunche (pop culture ronin) at Saturday, October 19, 2013