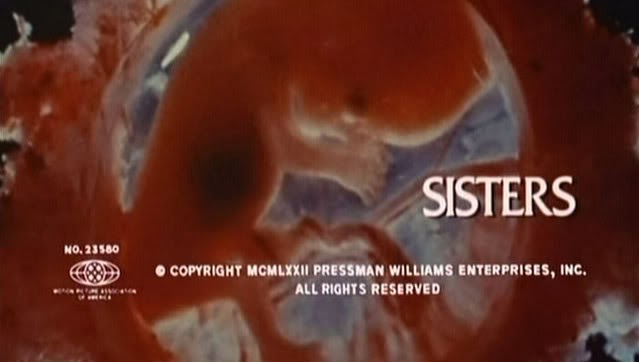 Beautiful French-Canadian model/actress Danielle Breton (Margot Kidder) has a one-night stand with an advertising salesman (Lisle Woods), but that moment of bliss is shattered when Domique's formerly-conjoined identical twin, Domique (Kidder again), savagely murders the salesman with a butcher knife, seemingly with no provocation. 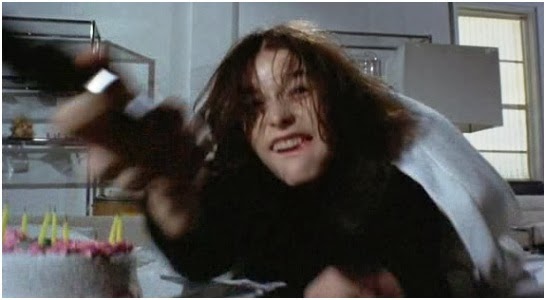 Dominique: Not a morning person.

The crime is witnessed through a neighboring building's window by journalist Grace Collier (Jennifer Salt), who alerts the authorities while Danielle's incredibly creepy ex-husband, Emil, (William Finley), helps hide the body and clean up an evidence before the police arrive. Unfortunately for Grace, the police have no love for her in the wake of an unflattering article she wrote about them, so when they show up to investigate her fervent claims of witnessing a murder are met with skepticism. That situation is in no way helped by Danielle being charming and sweetly French-accented as the police scour the now clean apartment, missing the body stashed within the fold-out couch, after which the cops vacate the place in a clear state of annoyance, leaving Grace with a stern warning not to waste their time in the future. Frustrated and absolutely certain of what she witnessed, Grace refuses to just let the murder go, so she uses her investigative journalistic skills to follow Danielle's trail and figure out just what's up with her and her twin sister, thus unwittingly plunging herself into what can only be described as a waking nightmare of the worst order.

Though technically a psychological thriller of the Hitchcockian sort — which comes as no surprise since this is the baby of Brian DePalma, the man who wears his Hitchcock influence on his sleeve — SISTERS veers deep into outright horror in its last third, and I do mean deep. It's tough to say more without spoiling the story's genuine surprises and very creepy aspects, but I will say that this is a film best avoided if you have any phobias involving mental asylums, unethical misuse of hypnosis, and doctors who lack even a shred of a moral center. And though Margot Kidder is best remembered these days as Lois Lane in the Christopher Reeve Superman movies, SISTERS is hands down her finest performance. A real star-making turn, it was aarguably the strength of her work here that brought her to the attention of the makers of the first Superman film, and it's arguable that she was never as good again. That's a goddamned shame because what Kidder puts on the screen here is indelible, and I would have loved to see what else she would have done onscreen had she not been pretty much typecast as Lois Lane and later becoming infamous for a very public bottoming-out involving her bipolar disorder. But whatever the case, SISTERS remains and Kidder's brilliance is thus preserved for posterity. HIGHLY RECOMMENDED.