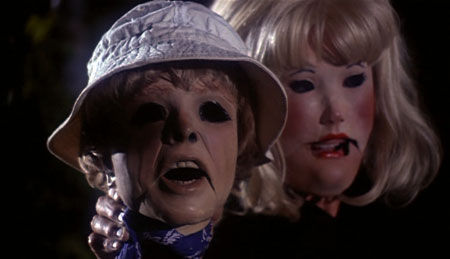 Five young friends traveling through the back woods in two vehicles are separated when one of their number leaves to find a replacement for a flat tire. Happening upon a gas station, the young man in search of a tire finds the place apparently deserted but is attacked and killed by an assortment of suddenly-animate inanimate objects that fly through the air as a number of manikins advance upon him. Meanwhile, the rest of the group find a remote tourist trap and encounter Slausen (Chuck Connors), a gun-toting oldster who creeps-out the group's girls as they swim nude in  a lake that turns out to be on his property. Slausen grouses about his tourist trap, a showcase featuring a collection of detailed animatronic wax figures, losing business over the years, but he agrees to help the group and takes them back to his home/museum. From there, things get very weird as the twenty-somethings are stalked one-by-one by a masked assailant who wields telekinetic powers and brings sundry objects and manikins to menacing life during his predation.

TOURIST TRAP came out shortly after the original HALLOWEEN (1978) and just before the slasher movie boom of the 1980's kicked off with FRIDAY THE 13th (1980), so it occupies an interesting niche at that place and time in the horror genre,. It's not gory at all and its creepy vibe is very much one of the last vestiges of the "old school" horror flavor that would be supplanted by the likes of Jason Voorhees, Freddy Kreuger, and a host of other '80's-style bogeymen whose filmmakers mostly eschewed genuine suspense in favor of turning the screen into an abattoir replete with gratuitous nudity, gallons of Karo syrup blood, severed foam latex appendages, and "creative" kills. By way of comparison, what TOURIST TRAP has to offer as a transitional film may seem slight to hardened gorehounds and those who favor their scares with a harsher edge, but if given a chance it is revealed to possess a level of creepiness straight out of some almost-forgotten childhood nightmare. In fact, it would make for a very good "starter" horror film for kids, especially kids who might find the classic Universal horror cycle of the 1930's and 1940's — my choice for the perfect introduction to the form — to be too old, creaky, and quaint by virtue of their being in black and white and also for their comparative restraint.

Back in the days, New York City's Channel 9 ran TOURIST TRAP on a fairly regular basis and if you were a young horror fan in the Tri-State area at the time, it's a good bet you saw it there at least once and likely harbor a certain fondness for its pre-Jason charms. Its not a jump-out-of-your-skin shocker, but it's certainly worth sitting through at least once. And believe me when I tell you you'll never forget the imagery of the laughing manikins or the masked and bewigged visage of the telekinetic killer. (A young and very hot Tanya Roberts is also a bonus.) 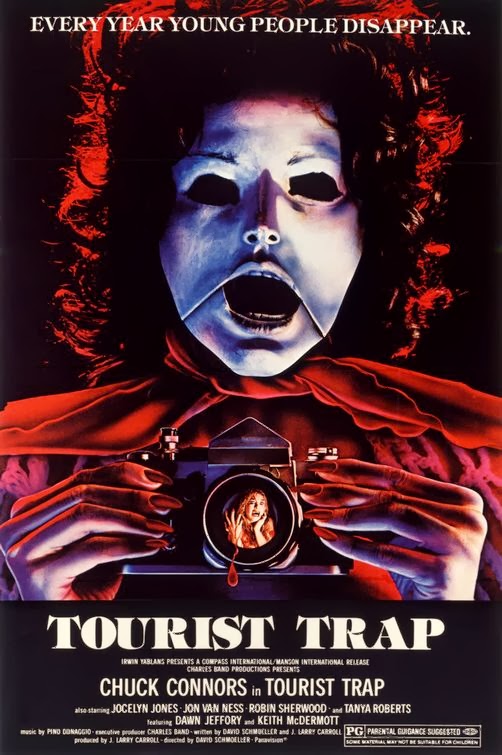