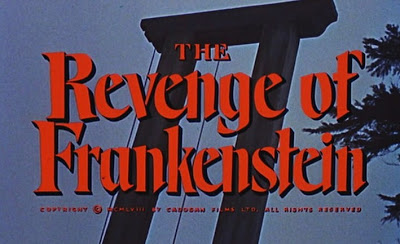 Picking up right where THE CURSE OF FRANKENSTEIN (1957) left off, things kick off with a bang as a priest is beheaded by guillotine and buried, his body being interred in place of the escaped Baron Frankenstein (Peter Cushing), who fucks off out of town and reestablishes himself as Dr. Stein in the village of Carlsbruck. Three years later, "Stein" is making a good living by attending to rich clients and becoming publicly lauded for his work in caring for the poor, providing them with medical treatment (while secretly also using them as fodder for fresh body parts to be used in his signature diabolical experiments) that incurs the jealousy of the town's previously-established medical council. (They object to Stein's free clinic approach and how his apparently altruistic efforts make them look like the pack of greedy, uncaring turds that they are.) A young member of the council, Dr. Hans Kleve (Francis Matthews), recognizes that Stein is in actuality the infamous Baron Frankenstein and blackmails the Baron into accepting him as his pupil. In an interesting twist, Kleve is not out to screw the Baron over. Instead, he is a genuine fan of the Baron's highly questionable surgical methods, and he seeks to emulate his idol. The Baron agrees to Kleve's terms and in no time the blackmail aspect is completely forgotten as the pair prove to be a match made in mad science heaven, as Frankenstein reveals his latest project to Kleve: a man pieced together from bits and bobs of patients that will serve to house the brain of Karl (Oscar Quitak), a deformed fellow who is only too eager to aid the Baron in his efforts since it will yield him a body that is not his enemy. 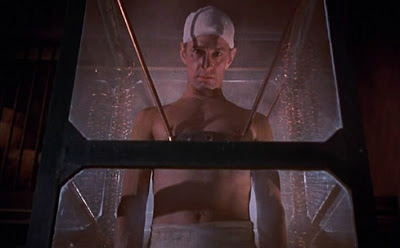 Armed with the lessons learned from his first attempt at building a man from sundry pieces — a creature that was a hideous monstrosity — the Baron's latest model actually shows considerable promise, and the transplant goes off without a hitch. Unfortunately, the Baron must still contend with the jealous machinations of the medical council as one of their numbers sends his comely daughter, Margaret (Eunice Gayson, who four years later would gain screen immortality as Sylvia Trench, the very first Bond girl, in DR. NO), to serve as an unwanted nurse (presumably so she can report back to her father, but she's actually quite true blue). 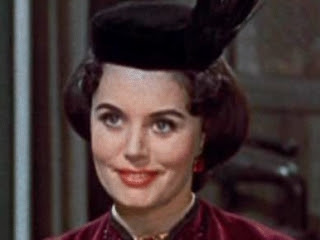 Eunice Gayson as the sweet Margaret, four years before she became the very first Bond girl.

The convalescing Karl must be kept strapped to his bed until he is deemed fit for release by the Baron, but the well-intentioned Margaret, hearing of the clinic's secret patient allegedly being mistreated, loosens the restraints, allowing Karl, who dreads being the focus of attention by the medical community when the Baron publicly unveils his medical miracle, to free himself and flee. As this is a Hammer Frankenstein movie, you just know there was no fucking way that the Baron's schemes would result in his desired scientific/medical success and recognition, and that it was all inevitably destined to crash and burn in some form of comeuppance resulting from Frankenstein's coldly relentless playing at the work of God. Things do go dreadfully wrong, though not nearly as badly as some of the other entries in Hammer's Frankenstein cycle, and since this was only the second installment in a six-film cycle, the Baron does manage to elude those who would see him dead and buried in unhallowed ground...

As the Hammer Frankensteins go, this one's pretty good, though it's not as medically creepy as some of the subsequent entries, nor is the Baron as sociopathically ruthless in his experimentation as he would later be depicted. The true monster in this series is of course the Baron himself, and in this chapter he's almost likable, which considerably detracts fro the character's appeal as handled by Peter Cushing, Nonetheless, this is a must for Frankenstein fanatics, Hammer completists, and fans of British people playing people of presumably-Teutonic extraction. 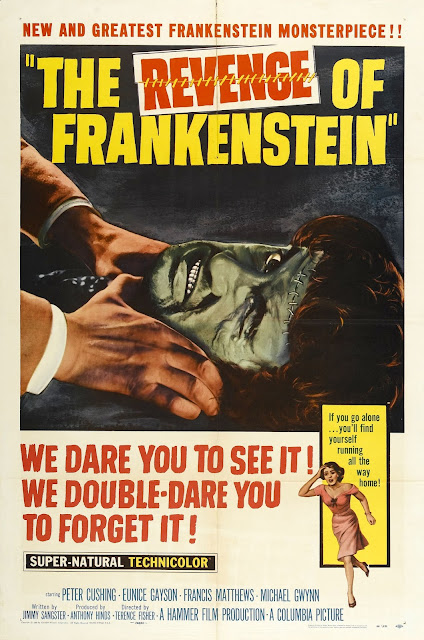