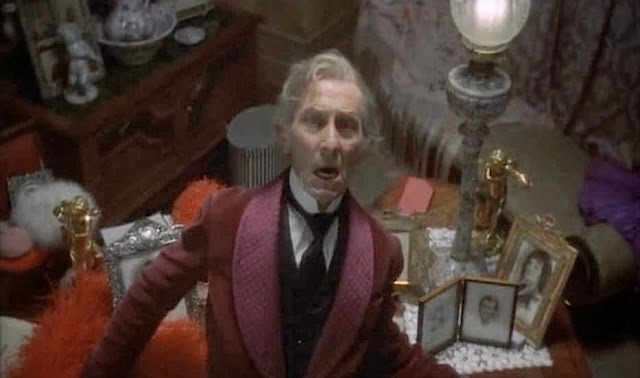 Professor Emmanuel Hildern (horror veteran Peter Cushing), about to learn the hard way that it's not a good idea to amputate the middle finger of the literal physical embodiment of raw, primal evil.

Britain's Victorian era, Professor Emmanuel Hildern (Peter Cushing) returns from an expedition to New Guinea, bringing with him an oversized skeleton not dissimilar to your standard homo sapiens, but he claims that the fleshless frame is the literal physical embodiment of evil. Rather than do the sensible thing with so malignant a specimen and chuck it into the nearest blast furnace, Hildern of course keeps the fucking thing in his lab, where he of course conducts research upon it. Discovering that the skeleton regenerates its flesh when wet, the eager scientist lops off one of the creature's middle fingers, exposes it to water, and examines its blood in detail, concluding that evil is a curable disease and that an antidote can be made. Hildern is obsessed with this idea because his wife suddenly went completely insane years earlier and died in a mental institution, utterly shattering the professor, who still keeps his wife's room and personal effects intact. His toothsome young daughter, Penelope, is coming of age and Hildern (Lorn Helbron), worried about his daughter possibly becoming mentally ill like her late mother, keeps her on an over-protectively tight leash, a strategy that inevitably backfires, so he injects the girl with his untested anti-evil vaccine. This being a British horror movie in the Hammer mold (though significantly not a Hammer film), Penelope goes batshit crazy and escapes into the nearby village, where she runs amok at the local pub, acting wantonly and basically becoming a violent savage. While all of the aforementioned mishegoss is going on, Hildern's psychiatrist brother, James (Christopher Lee), who envies his sibling's findings, is granted custody of the now-feral Penelope, whom he takes to his mental asylum for care. (Needless to say, the place is the kind of shrieking madhouse where being a resident/patient would be a fate far worse than death.) He also plots to steal Emmanuel's notes and the skeleton with the aid of a shady carriage driver. While Emmanuel is out, James's driver makes off with the skeleton but the carriage overturns in the middle of a torrential rainstorm and, well, you do the math...

THE CREEPING FLESH is another one of the number of horror outings that played in fairly regular rotation on Channel 9 during my youth, so I saw it a number times and have an odd love/hate opinion of it. On the one hand it tries its damnedest to emulate the look and feel of Hammer's signature Gothic shockers, even going so far as to nab Cushing and Lee as its stars, and while it is not at all a bad film, the end result is something of a letdown. It's not as nasty of gory as the films it tries so hard to ape, and its twist ending always leaves me frustrated, with a number of very good questions left unanswered. That said, it's still a fun little piece and it's not bad as a starter horror film for kids of about six and older. (NOTE: Don't necessarily use my age recommendation as a solid indicator. I was exposed to horror as early as age 3 or 4, so I was broken in very early. Your child's mileage may vary considerably.) 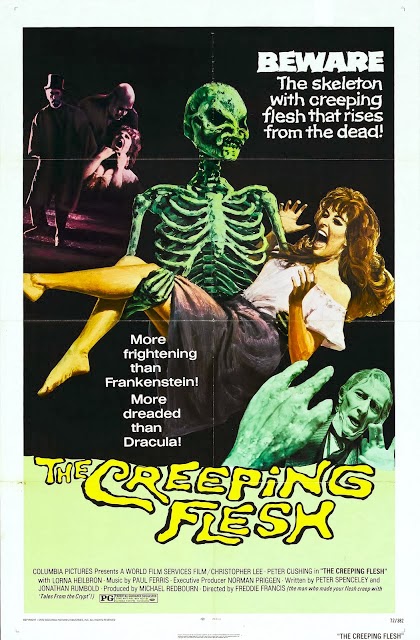