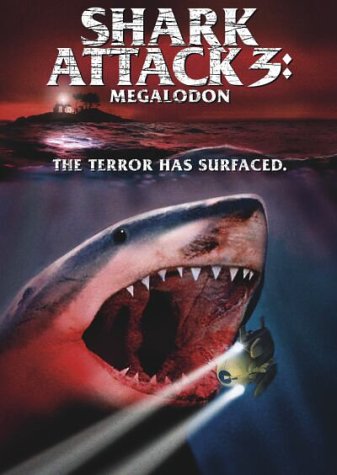 Before I do my usual intro/back info bit, I'll cut right to the chase: SHARK ATTACK 3: MEGALODON is an unmitigated piece of shit, but what a glorious turd it is. I went into this one having stumbled across a clip from it on YouTube, and if ever there was a clip that sold me on a movie, it was this one:

Wasn't that exactly what one wants to see in a shark movie?

I'm a lifelong lover of sharks (especially Great White sharks), creatures whose forms are about as perfectly suited to what they do as is possible for any living being, those activities including swimming, eating, and making little sharks (to paraphrase Hooper). You enter into their territory and you may end up a case of "today, a robust scuba diver; tomorrow, shark shit," and there's no malice intended; you just happened to be within reach and of a size to fit into the shark's gaping, razor-toothed maw, and dem's da breaks. Consequently, these ravenous fish have held humans in a state of simultaneous fear and respectful awe, making for ideal MacGuffins in any number of true-life nautical accounts and fictional concoctions, the most famous of which is undoubtedly JAWS (1975), the classic film made from Peter Benchley's bestselling and rather unremarkable novel.

Once JAWS lucratively tapped into the audience's primal fear of the implacable force that lurks beneath the waves, it was a given that there would be a swift succession of sequels and crappy knockoffs, each likely to earn back their makers at least some cash, provided there was lots of onscreen carnage involving screaming idiots who were to fucking stupid to get out of the water. Most of these films brought in the flesh-and-bone-rending violence and gore to audiences with a sub-R rating, meaning lots of shrieking, crimson-clouded water, and the occasional bonus of a rubber leg or head slowly sinking to the ocean floor, but this was all driven home quite effectively through sound effects and editing, along with our innate identification with the characters — read generic "shark fodder" — getting sloppily devoured. But no matter the level of gore, the shark attack genre keeps occasionally resurfacing some thirty-three years after JAW set the standard, but its progeny have mostly chosen to ignore anything resembling quality filmmaking and have turned the shark into a straight-up sea monster out to eat people while acting as some sort of deep sea understudy to the Grim Reaper. Which (finally) brings me to SHARK ATTACK 3: MEGALODON, in which the shark is not just a monster, but a balls-out, "Holy motherfucking shit, that thing is big" giant monster. Not IT CAME FROM BENEATH THE SEA huge, mind you, but big enough to count. 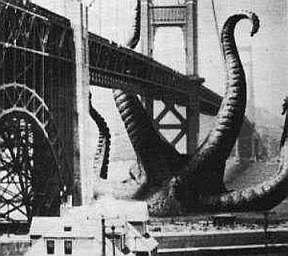 IT CAME FROM BENEATH THE SEA (1955): the biggest goddamned tentacled wiggly ever to terrorize San Francisco.

If you've seen JAWS, you already know the basic story: a big-assed shark menaces a beach resort that's kept open by a corrupt official even after the local authorities and a marine biologist urge him to close it,  resulting in a bunch of intrepid worthies setting off to kick its ass while accompanied by a score that's just a note or two shy of outright copyright infringement. That's it really, but this time around it takes place in Mexico, has way more cursing and gratuitous nudity, and there are two sharks, one at a scale comparable to the windup critter in JAWS, and another that's supposedly close to seventy feet in length, both of whom growl. These fish are Megalodons, gargantuan ancestors to the awesome Great White, so by making the monsters in this flick ultra-ginormous the awesomeness factor is increased considerably. Well, in theory anyway, since this production is too cheap to afford much by way of effects, so a good 98% of what we see of the sharks comes from stock Great White footage probably culled from Discovery Channel "Shark Week" outtakes that are slowed down somewhat to convey ponderous size, with the remaining 2% featuring either cheesy puppets or borderline-bogus CGI representations. Fortunately there's a fairly high body count comprised of people we just don't care about, coupled with lots of terrific set pieces that make the most of the sharks' enormity. I mean, what's not to love about a shot like this: 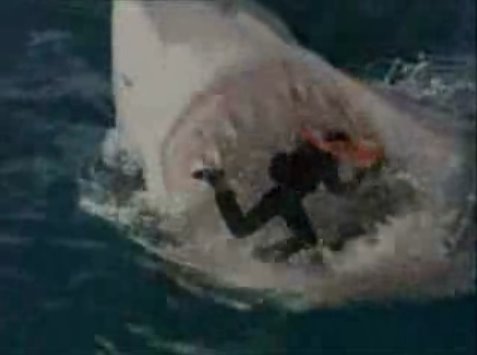 The whole film wallows in being an idiotic, shameless ripoff, and therein lies its charm: it knows exactly what's it's doing, and it simply doesn't give a fuck who notices. The story's a total joke, the performances bite the big one, and you'll sit there smacking your head every five minutes while watching it, but it's an enjoyable time waster that's the cinematic equivalent of a six-piece order of Chicken McNuggets; it ain't necessarily good per se, but it's fun while you're ingesting it.

Oh, and another added bonus is seeing a pre-DOCTOR WHO and TORCHWOOD John Barrowman — Captain Jack Harkness on those shows — as the Roy Scheider stand-in one of the greatest from-out-of-nowhere lines in film history. How his co-star, Jenny McShane — who looks not unlike a white version of the mouth-watering Leila Arcieri — , kept a straight face during that scene is beyond my ability to process.

Bottom line: it's crap, but it's more entertaining than any number if big-budget Hollywood blockbusters, so if you're in the mood for something completely ridiculous, TRUST YER BUNCHE!!
Posted by Bunche (pop culture ronin) at Tuesday, October 22, 2013