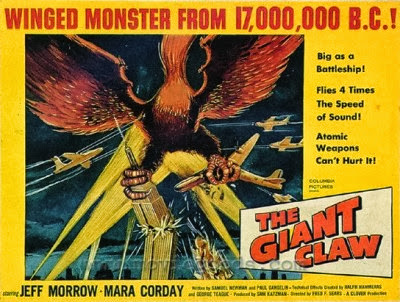 A mysterious U.F.O. is sighted and disappearances of planes and their crews follow the sightings. Eventually the object is revealed as a gigantic, ravenous bird of extra-terrestrial origin and its rampage claims herds of cattle, more planes, a couple of trains, and people on the ground, but not even the might of the world's military can stop the creature, thanks to it possessing some sort of anti-matter force field. As the death toll rises, the horror kicks up several notches as it becomes clear that the colossal predator has chosen the earth as its nesting ground and it's ready to lay eggs...

While not a horror film per se, THE GIANT CLAW is definitely a monster movie, one very much in the classic 1950's mold of military-versus-gigantic-(FILL IN THE BLANK) flicks, and as such it's a serviceable time-filler. It's decent enough but not exactly the kind of film that would necessarily have been remembered after its era of release, if not for one element that has granted the movie both screen immortality and outright infamy in the annals of motion picture history. That element is the title creature, a would-be horror that instead of dread elicits howls of derisive laughter by virtue of its jaw-droppingly awful execution. The ginormous space-bird is brought to vivid life — though absolutely not in the way the filmmakers intended — via a marionette, and not just any marionette.

The puppet in question is, simply put, quite possibly the most ridiculous-looking beast in all of cinematic monsterdom. That's certainly a lofty claim and there are many, many other contenders for that dubious distinction — the title character from ROBOT MONSTER immediately leaps to mind — but how does one beat a tatty marionette whose stiff movements are overshadowed by its long and scrawny neck, flaring nostrils (?!!?), stringy and balding crest/Mohawk, shrill squawk, and large googly eyes? Simple answer: one doesn't. I mean, just look at this thing: 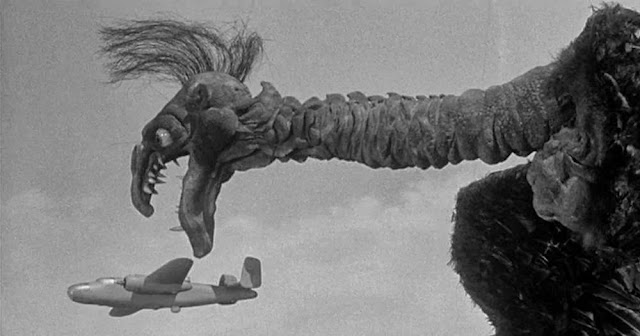 I know, right? It fairly screams "Special effects by Billy!" And here's a better look at its "fearsome" visage: Some sources say that the puppet was crafted by some cheapjack Mexican company but whatever the case, the monster completely scuttled all hope of the otherwise straight thriller being taken seriously by anyone who draws breath.

And you really have to pity the actors. While shooting the movie, they obviously to emote in reaction to special effects that they couldn't see, so what they ended up with was a feature film in which they bring the requisite amount of 1950's military/scientific gravitas to what can fairly be described as "The Attack of the Kiddie Show Vulture Puppet from Outer Space," and therein lies the indelible beauty of THE GIANT CLAW. It's unintentionally hilarious to see about a half-hour's very straight-faced buildup to what we expect to be some kickass alien raptor the size of a battleship (as it's described in the film), only to have the rest of the film play out as a race against time in which military brass, a gung-ho pilot hero (Jeff Morrow), and a hot brunette scientist (the always sexy Mara Corday) must contend with a refugee from PEE-WEE'S PLAYHOUSE. (NOTE: Terry the Pterodactyl from PEE-WEE'S PLAYHOUSE was an infinitely better puppet.) All of this is presented with the same level of straight-faced seriousness and impending doom as one would expect from a production of MACBETH, and the juxtaposition of said somber tone with the antics of one of the sorriest special effects on record make this film a cult favorite and the object of an almost perverse fascination. If you're ever at a loss for something to add to your Netflix queue, add THE GIANT CLAW, kick back a few beers and smoke a couple of quality blunts with some like-minded friends, and you will not be disappointed. And in closing, here's a wee taste:

I read an essay on this film, and the author had interviewed the star, Jeff Morrow. It seems he cast had no idea what the bird would look like while filming. He saw it playing at some out-of-the-way theater, and he decided to sneak in and watch the film with an audience. When the bird first appeared, he was gobsmacked, to say the least. The audience was hooting with laughter as Morrow sank lower and lower into his seat. How he finally managed to sneak out without being seen is a miracle.