No, you are not going mad. That's actually Frankenstein's monster versus a jungle girl from outer space.

When four competitors in a balloon race find themselves stranded on a mysterious island with their dog, they encounter a bizarre assortment of brainwashed zombie-men in dark shirts and cool shades, a drunk sailor who continuously laughs for no apparent reason, a shrieking disembodied vision of Dr. Frankenstein (John Carradine in a piece of footage presumably from an unreleased movie), the requisite mad science, a painful arm-paralyzing effect that happens whenever anyone mentions a location other than the island, a seemingly insane castaway (Cameron Mitchell) who's imprisoned in a cage and somehow convinced he was the inspiration for the narrator of Poe's "The Raven," the great grand-daughter of Dr. Frankenstein who is married to a Van Helsing (talk about stacking the deck), a tribe of jungle girls who are descended from space aliens, and of course the Frankenstein monster himself. If all of the information imparted in the preceding run-on sentence seems confusing, just try sitting through and making sense of the movie itself! (Yeah, good luck with that.)

FRANKENSTEIN ISLAND was the final film from schlockmeister Jerry Warren, the writer/director who also gave the screen THE INCREDIBLE PETRIFIED WORLD (1957) CURSE OF THE STONE HAND (1964), and the garbage classic THE WILD WORLD OF BATWOMAN (1966), and his career could not possibly have had a more memorably-schlocky coda. To describe the film as a confused mishmash is a colossal understatement, as absolutely nothing in the story makes even a lick of sense. It features more cross-genre gene-splicing than Ed Wood's PLAN NINE FROM OUTER SPACE (1959) while being almost as gloriously incompetent as that black-and-white landmark of bad cinema, and it's a very interesting throwback because it looks and feels just like JESSE JAMES MEETS FRANKENSTEIN'S DAUGHTER and other films twenty years (or so) its senior. 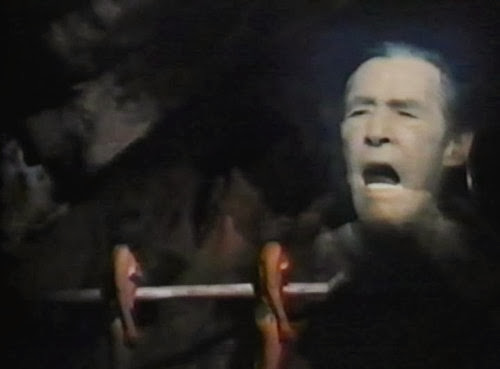 John Carradine's disembodied head, inexplicably shrieking "THE POWER! THE POWER!!!" while deep in the caves beneath the island. (It's kinda/sorta explained but I swear it made no sense to me.)

There's also a distinct flavor to all of it that evokes a horror movie a seven-year-old would have made if they had the resources at their disposal. It's difficult to cite a single element that stands out as the most ridiculous example of "kid logic" in this un-scary world-class jaw-dropper, but if I had to make that call I'd go with the concept of a tribe of jungle girls clad in leopard print bikinis who are apparently the descendants of space aliens. Any excuse to provide a movie with female flesh is okay by me and jungle girls are one of my favorite things ever, but the added  aspect of having this film's jungle girls be aliens for no real narrative reason is a stroke of twisted genius, and I wish I'd thought of it first.

The cast is nothing to write home about, despite the presence of John Carradine (in stock footage only) and Cameron Mitchell, though it is worth noting that Sheila Von Frankenstein-Van Helsing (Oy, what a name!!!) is played by none other than Katherine Victor, who will forever be infamous to bad movie aficionados as the title character in THE WILD WORLD OF BATWOMAN, a movie so bad as to actually be mesmerizing. In FRANKENSTEIN ISLAND she's just shy of sixty, and you have to admire her moxie for still being able to get away with rocking a rack-tastic outfit. 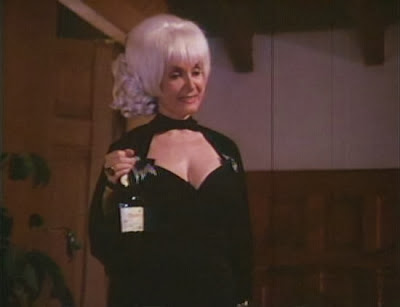 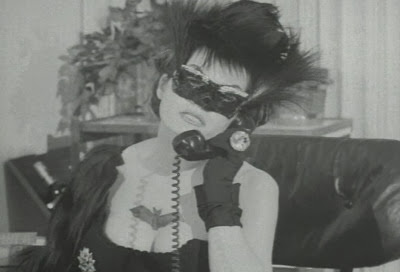 Katherine Victor as seen in the infamous THE WILD WORLD OF BATWOMAN (1966). Was Victor the most fashion-challenged actress in trash cinema history?


As previously stated, the film makes zero sense on just about every level, so by the time the crazed climax happens, the audience has long been pummeled into submission by all the rampaging non-sensicality, so when the zombie dudes and the Frankenstein monster (who looks a hell of a lot like Phil Hartman's fondly-remembered take on the character from his SNL days) engage the balloon castaways and the outer space jungle girls in final combat nothing seems any more idiotic than anything else that unfolds during the final reel. Replete with poorly-choreographed karate, flailing jungle girls, broken lab equipment, a Halloween devil's pitchfork that inexplicably turns one of the outer space jungle girls into an outer space jungle girl vampire, an ultra-bogus disintegrator gun, a tarantula and a garter snake deployed as offensive weapons (to no great effect), a living brain in a glass bubble, and even more, the zero-budget apocalyptic finale must be seen to be disbelieved. 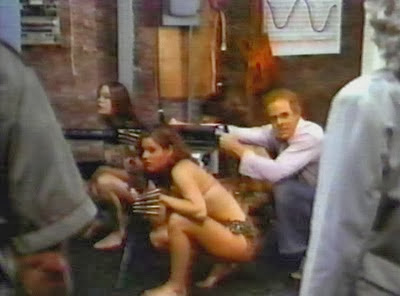 Though not scary in the least and very much PG-rated, I cannot recommend FRANKENSTEIN ISLAND enough. It's one of those rare movies that wallows shamelessly in the fact that it's completely and utterly out of its mind and simply does not give a fuck, and in this age of bland, lifeless movies by committee, Jerry Warren's swan song stands as a monument to one man's singular, demented artistic vision. Believe me when I tell you that you've never seen anything like it, and also take my advice and have plenty of beer and other questionable "party favors" close at hand when watching it with like-minded friends and loved ones. Concrete proof that a movie doesn't have to be coherent to be entertaining as a motherfucker, FRANKENSTEIN ISLAND is a unique triumph. Someday I intend to host a drunken screening of both THE WILD WORLD OF BATWOMAN and FRANKENSTEIN ISLAND, just to see if an audience's collective mind can withstand such an assault of pure, unadulterated, back-to-back mind-rot. 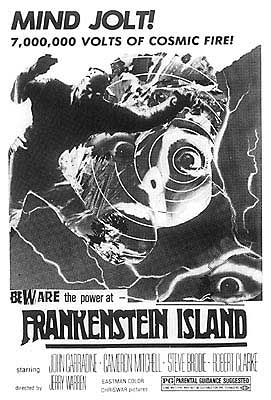 An ad from the original theatrical release.
Posted by Bunche (pop culture ronin) at Wednesday, October 30, 2013