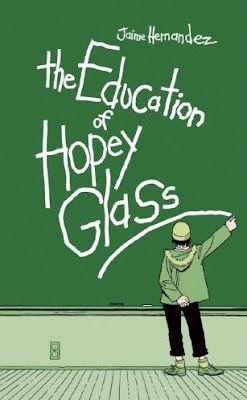 I just received a pre-release copy of my man Jaime Hernandez’s latest LOVE & ROCKETS collection, and I have to say it was a lot like starting up with a soap opera you were once hooked on but left behind years ago, only to return and feel like you never stopped watching. I was hooked on the original run of L&R (1981-1996), and when it was over I didn’t feel the least bit saddened since it felt like it was coming to an end after naturally having run its course, plus the uber-talented creators — Jaime and Gilbert — were so balls-out creative I was sure I’d see much, much more from them in the years to come. That said, when Los Bros. Hernandez brought L&R back in 2001 I had little urge to return to my old friends in Hoppers and Palomar, so other than occasionally thumbing through an issue or two in the comics shop I didn’t buy any of the new material. It just seemed like more of the same.

And ya know what? That’s exactly what it was, as proven by this upcoming volume, but when “more of the same” means being reminded of exactly why I rate Jaime Hernadez as highly as I do in regard to across-the-board storytellers, I couldn’t be happier.

THE EDUCATION OF HOPEY GLASS trots out many of the characters familiar to longtime readers of Jaime’s “Locas” stories, with ageing punk-rocker/dyke Esperanza “Hopey” Glass taking the spotlight in the book’s first half, now finding gainful (if unlikely) employment as a kindergarten teacher. “Day By Day With Hopey” chronicles a week in our feisty heroine’s life that sees her transition from tending bar to shepherding wee ones while her low-rent personal life teems with lovers who come and go, with her lifelong friend — and former true focus of Jaime’s Hoppers epics — Maggie remaining the only constant.

NOTE TO MAGGIE FANS: Maggie figures only peripherally in this volume, so don’t come in expecting her usual circus of dysfunction and plus-size angst.

Not much really happens over the course of “Day By Day With Hopey” in terms of action or intrigue, but Jaime continues to spin narrative gold from the mundane straw of his protagonist’s existence, and Hopey’s awkward romantic and social tribulations remain as involving as they were when I last read about her in depth, some twelve years ago.

Serving as the bridge to the next story is “Angel of Tarzana,” featuring five mostly wordless pages of a fetching Latina jockette — who, if I didn’t know better, I’d swear was the daughter of “Locas” semi-regulars Penny Century and H.R. Costigan grown up — whom Jaime quite clearly has a ball drawing, showing her off to athletic advantage as she plays softball, competes in gymnastics and lifeguards. The character is infectiously charming, and just as you’re asking why this section, which comes off as little more than glorified sketchbook excerpts, was included, we’re immediately dropped into the deep end of a fifty-seven page narrative starring Maggie’s long-ago lover, Ray Dominguez, by far the most compelling of Jaime’s relatively few male leads. Now in his early forties and still carrying a torch for Maggie, Ray finds himself caught up in a maelstrom of murder, two-bit gangsters, titty bars, comic book conventions, and his lust for the drop-dead-gorgeous but borderline-psychotic and annoying Vivian, a zaftig aspiring actress known to many as “Frogmouth,” who herself has a bit of history with Maggie. And all of this is perfectly offset by the innocent intro featuring Angel, who ends up bonding a bit with Vivian as the story organically evolves.

Fraught with all manner of grimy intrigue that brings to mind a Chicano Mickey Spillane yarn, the second half of the book comes as an unexpected and pleasant surprise, fully reviving my interest in the now (mostly) middle-aged Hoppers cast and spurring me to order the previous volume. I very much want to have more of a handle on what makes the volatile Vivian tick, and I'd like to witness Hopey’s bartending stint — guaranteed to be full of divey squalor and wistful music recollections that us ageing punks/new wavers can relate to — so it’s official: consider me a born-again Jaime booster.

Love & Rockets remains one of the high points of sequential graphics artistry. And although the Palomar stories had greater "literary" depth, it's the Locas tales that always had my heart. Thanks for turning us on to this!