THE RETURN OF WILD CARDS! 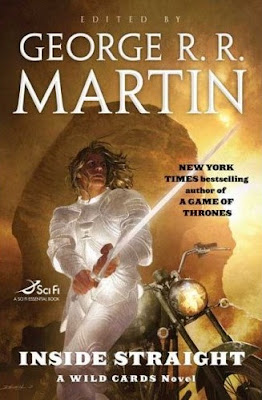 To those of you out there who are in the know, it's time to rejoice: the 18th WILD CARDS novel just came out, and that makes me very happy indeed.

But first, a wee bit of background from Amazon.com:

"In 1946, an alien virus that rewrites human DNA was accidentally unleashed in the skies over New York City. It killed ninety percent of those it infected. Nine percent of those who survived mutated into tragically deformed creatures. And one percent gained superpowers. The Wild Cards shared-universe series, created and edited since 1987 by New York Times #1 bestseller George R. R. Martin along with Melinda Snodgrass, is the tale of the history of the world since then-and of the heroes among that one percent. Originally begun in 1986, long before George R. R. Martin became a household name among fantasy readers ("The American Tolkien" --Time magazine), the Wild Cards series earned a reputation among connoisseurs for its smart reimagining of the superhero idea. Now, with Inside Straight, the Wild Cards continuity jumps forward to a new generation of major characters, entirely accessible to Martin's hundreds of thousands of new readers, with all-original stories by Martin himself, along with Daniel Abraham, Michael Cassutt, and Stephen Leigh, among others."

Yer Bunche was turned on to this series by a freelancer who came and went during my first year in the Marvel Bullpen (1990), and I'm sad that I can't recall his name so I could acknowledge him properly. But his influence lives on, thanks to me taking his recommendation and discovering my favorite series of sci-fi novels. The "superheroes in a realistic context" scenario is nothing new — the 1977 novel SUPER-FOLKS by Robert Mayer springs to mind — but the WILD CARDS books are clearly a labor of love by people who not only enjoy the genre, but also have the writing chops to pull it off; well, mostly, but as it's a mosaic series there are bound to be some iffy entries.

I was hooked from the first installment and in no time I’d worked my way through the six books that had been published up to that point, immediately finding myself doomed to the several-months-long wait between installments. There were fifteen volumes issued from 1986 through 1995, at which point the series lay dormant until the release of a short story anthology in 2002 and a proper narrative novel in 2006, but now it’s up and running again thanks to Tor Books, with a new book planned for yearly release.

The series is a delight for lovers of the superhero genre, and the myriad of characters feature powers that often veer beyond what’s found in the average monthly comic book, a creative doorway helped immensely by the series’ hard-R, sometimes X-rated content. I mean, how can you not love Roulette, an assassin who seduces her targets and kills them with her incredibly deadly nerve toxin vaginal juices? Or the bizarre Crypt Kicker, a super-strong, undead government agent who’s stinky as hell thanks to the fact that he’s decomposing? Or my favorite, the Projectionist, a shape-shifter who can assume the prefect likeness of any character he’s ever seen in the movies? (A great bit with this character had him turn into a thirty-foot King Kong, only he didn’t take into account his mind adopting simian properties in the process, trapping him in that form for a couple of decades.) Trust me, there’s something for everybody!

I’m about eighty-three pages into the new volume, “Inside Straight,” and thus far it’s a return to form after a few middling entries (the short story collection from 2002 was perhaps a series nadir). The plot revolves around the launch of “American Hero,” a brain-dead reality show with superpowered contestants that crosses AMERICAN IDOL with SURVIVOR and THE REAL WORLD, and follows the contestants through the kind of shenanigans you’d expect from such programming, only this time featuring contestants who can do all manner of fantastic things, including a blogger who goes by “Jonathan Hive” and can turn into a sentient swarm of 100,000 wasps. The characters who intrigue me most are newcomers the Earth Witch — a Mexican ditch digger with powers akin to the infamous Terra of DC Comics’ classic THE NEW TEEN TITANS: THE JUDAS CONTRACT — and eleven-year-old Rachel Weinstein from Bayonne New Jersey, aka Dragon Huntress; the kid has a bag full of cuddly stuffed animals that she can bring to full-size life, especially her favorite, a dragon that becomes the sixty-foot-long, armored and fire-spewing monstrosity of legend. And somehow all of that mishegoss will converge with the fallout from a savage political assassination in the Middle East that opens the book, so I can’t wait for the workday to end so I can hit the subway back to Brooklyn and lose myself within the books pages.

And of course I’ll let you know if it’s worth reading when all is said and done. Oh, and series contributor Melinda Snodgrass — creator of major character Dr. Tachyon — wrote “The Measure of A Man,” the outstanding episode of STAR TREK: THE NEXT GENERATION in which the sentience of Data the android is put on trial, the outcome of which determines whether or not he has the right to say “no” to being deactivated, disassembled, and studied. That story was terrific, but Snodrass’ work on WILD CARDS makes it look like a wet fart. I can think of few higher compliments.
Posted by Bunche (pop culture ronin) at Wednesday, February 06, 2008