A few nights ago I went to dinner with some friends at the Chip Shop on Fifth Avenue in Brooklyn, a Brit-syled eatery that doles out everything you could want in all its deep-fried glory (with the unfortunate exception of a batter-coated Nigella Lawson). The place specializes in fish & chips and other staples of the unfairly maligned UK cuisine, such as a truly fantastic plate of bangers and mash with an exceptional onion gravy (drooooooooool), and also stocks an modest assortment of English soft drinks. My friend Erin ordered a fizzy beverage called "Vimto," and when I saw its logo I had a sudden flashback to the anagram game played in both the novel and film of ROSEMARY'S BABY. 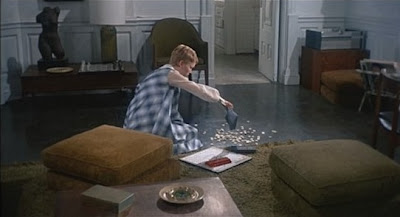 ROSEMARY'S BABY (1968), the film that established Scrabble as a vital survival tool.

In that story Rosemary and her friend Hutch are Scrabble buddies, and when Hutch susses out the Satanic plot to make Rosemary into the Devil's broodmare and subsequent mother of the anti-Christ, he sends Rosemary a parcel containing a bag full of Scrabble tiles and a book entitled "All of Them Witches" before his Mysterious demise. In no time flat, Rosemary figures out the implied connection between the marked pages of the book and the game pieces, rearranging the tiles until a horrifying truth is revealed (the secret of "Roman Castavet," anyone?). ROSEMARY'S BABY is my favorite horror flick for a number of reasons, and since first seeing it at age eight I think in anagrams when it comes to dealing with impending sinister shit.

So what does this have to do with Erin's fizzy soft drink? Look at the name: 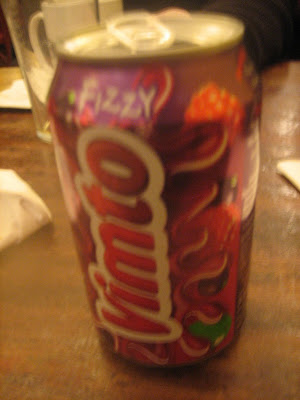 Vimto is an anagram for "vomit." Vomit in a can, sold as a refreshment. You have been warned.
Posted by Bunche (pop culture ronin) at Wednesday, February 27, 2008

I never understood what would be so bad about being the Antichrist's mommy...

I mean, once he takes over the world and fire and brimstone (whatever that is) rain from the sky and what-not, there's gotta be some decent perks...

A whole cadre of willing worshippers... Any hot guy/girl you could want, instant access to loads of cheap credit..

Read SON OF ROSEMARY, Ira Levin's unimaginably inferior sequel to ROSEMARY'S BABY, to find out how well any perceived perks of being the Anti-Christ's mommy worked out. Oh, and that book has the distinction of being one of the worst books I ever read, thanks to being just plain poor in general and having the worst ending of all time.

hey, what can I say... although it might sound like vomit in a can, its mighty tasty, although i much more prefer the non-fizzy version... ditto for Ribena...
--E!