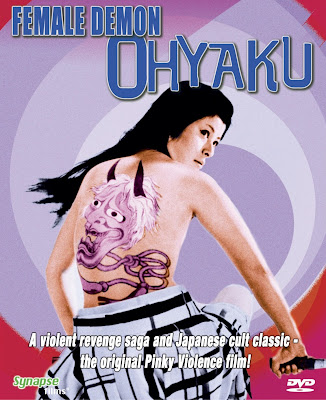 After having seen QUICK-DRAW OKATSU and OKATSU THE FUGITIVE (both from 1969), I finally got around to the movie that launched the LEGENDS OF THE POISONOUS SEDUCTRESS trilogy and it was certainly worth the wait.

Junko Miyazono stars as Ohyaku, an entertainer who performs for the drunken dregs of society when not scamming rich men with her possibly gay M.C. pal. Ohyaku’s position as a denizen of the seedy borderline underworld was ensured when her prostitute mother committed suicide and Ohyaku fell into the care of a manager/pimp who whored her out as she grew up. But now she’s an adult and has had enough of being used by all and sundry, and finds love with a rebellious and sensitive young ronin who plans to rob the local mint as a “fuck you” to the rich assholes who don’t care about the poor.

But, as often happens in chambara flicks, the ronin is betrayed and tortured into revealing the whereabouts of the gold and once that secret is divulged the ronin is beheaded in an impressive black-and-white display of grand guignol-style gore. As a preamble to this, Ohyaku is raped by the requisite evil magistrate, but when she refuses to be his concubine he sentences her to hard labor on a penal colony/gold mine, making her the only female on an island of very hardened and very horny thieves and murderers. But it could have been worse; Ohyaku catches the eye of the warden’s bisexual tattoo artist wife, and, after a failed lesbian pass, the artist instead expresses her lusts and passion by inking a huge demon’s head on Ohyaku’s back (which eventually leads to a fairly tame lesbian scene).

After that, it’s a symphony of underhanded strategy as Ohyaku uses her feminine wiles to pit several of the characters against each other — including a vile official who wants the tattoo artist to use her needle skills to kill Ohyaku via a secret pressure point technique so he can fuck her corpse (!!!) — and escape back to the mainland so she can avenge her lover.

Aided by a kindly gang boss (Tomisaburo Wakayama, about three years away from kicking more ass than is humanly countable as Lone Wolf in the “Babycart” series) and a couple of loyal helpers, Ohyaku metes out horrible retribution upon the asshole magistrate in a scene of surprising cruelty, involving the magistrate’s completely innocent girlfriend getting used as a by-the-hair counterweight to a huge guillotine blade.

I really enjoyed this one and was surprised to see how little it relied on swordplay to keep the viewer involved. Miyazono is one of the most three-dimensional heroines ever to grace a samurai picture, and you feel for Ohyaku’s plight from the moment she hits the screen. Unlike the women Miyazono essays in the sequels, Ohyaku is not a trained warrior, but is instead able to draw on a well of strength forged by a lifetime of misery and living by her skills and wits. Sure, she picks up a couple of bladed weapons when the story calls for it, but Ohyaku exhibits the kind of deadliness found in a majorly pissed-off woman who’s been fucked over by an abusive husband and has picked up the nearest sharp object so she can take care of business, rather than the martial superiority on display in the immediate followup, QUICK-DRAW OKATSU. The whole thing’s believable, engrossing, and heart wrenching, so TRUST YER BUNCHE and shake up your next chick-flick get-together with an actually classy exploitation offering. 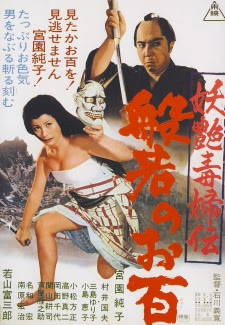