WHAT'S NEXT, A REMAKE OF THE GIANT CLAW?

Back in the days when I was getting my giant monster movie education from THE 4:30 MOVIE , on the afternoonss when for some reason they couldn't find a Godzilla or Gamera movie to run (they were quite plentiful even then), kids got treated to flicks featuring monsters that could at best be described as C-listers, and occasionally even D-listers. I'm talking about the one-shot city-ravagers like Yongary, Gappa (and it's parents), Dogorah, and even Emperor Guillotine (I always liked him), but the one that truly represents the also-ran monster is Guilala, the ridiculous-looking — even by the standards of rubber-suit titans — star of THE X FROM OUTER SPACE (1967). 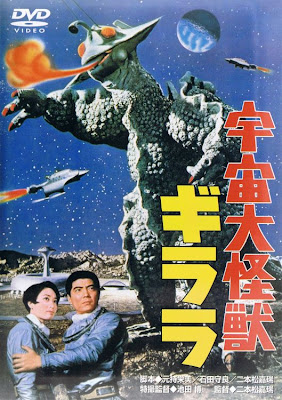 Released by Shochiku Kinema Kenkyu-jo in hope of cashing in on the popularity of Toho's Godzilla series, THE X FROM OUTER SPACE featured a gigantic, rampaging space alien that looked like a bizarre blending of an order of Egg Foo-Yung, a pair of joke shop antennae, a pack of scaly doilies, and a brood hen, and when it lardasses around it makes a weird mechanical noise like something Wile E. Coyote purchased from the Acme Company. 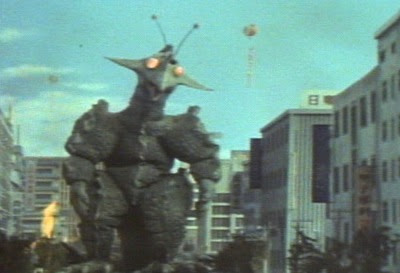 The stunning ludicrousity of Guilala.
It's pretty goofy and functions well enough as an amusing way to waste ninety minutes, but when all is said and done it barely cuts the mustard as a garden-variety giant monster opus, coming off as exactly what it is: a pale imitation of the vastly superior Toho output. I hadn't given THE X FROM OUTER SPACE a thought in years, but then I read an article over at SciFi Japan that announces a remake gearing up to go before the camera. 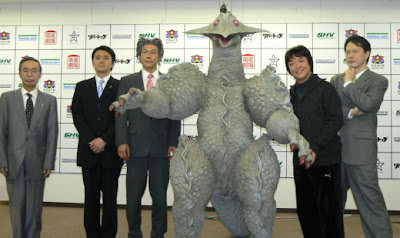 Back from the cinematic dead: first Rocky, then Rambo, and now...Guilala???

When I read that announcement the other morning, I almost snarfed my orange juice out of my nose. Has the giant monster industry really been reduced to pillaging its most half-assed creations in search of something, anything to put on the big screen? Sure, I said pretty much the same thing when the Gamera series got a much-needed and totally kickass reboot a little over a decade ago, but at least reviving Gamera made sense because that particular monster had a sizable fan base that would be willing to shell out their hard-earned yen to see what could be done with "the friend of children." I doubt that there's much similar interest in Guilala, but I will check out his new movie when it rears its wiggly, antennaed head. Hey, ya never know.

Oh, and for those who don't get the reference, here's a shot of the title critter from THE GIANT CLAW (1957): 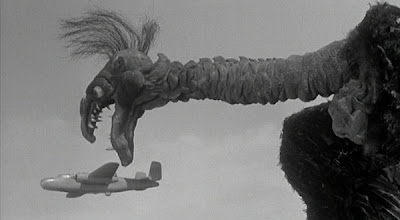 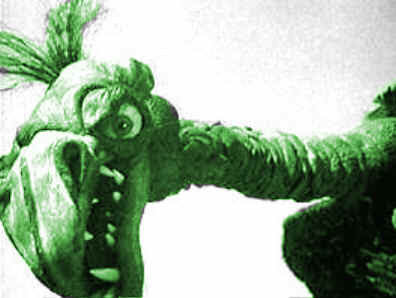 I dare some intrepid producer to make something viable out of this. No, in fact I double-dog dare you!
Posted by Bunche (pop culture ronin) at Tuesday, February 05, 2008

The best part of that movie was when the monster was walking down the street and trips over his own feet. The actor in that suit must have HATED it.