This year's Oscars have come and gone, and to tell you the truth I just don't give a fuck. After a lifetime of enduring the turgid awards ceremony and trying not to puke during the maudlin acceptance speeches and sickening performances of whichever song is up for the statue, I finally just said "no" and have accepted the fact that no matter how much I may wish for a miracle to happen there is not a snowball's chance in Hell that WAR OF THE GARGANTUAS or EIGHTEEN & NASTY VOL. 10 will sweep the Oscars as they rightfully deserve to, much less take home the prize for Best Picture. I'm tellin' ya, there just ain't no justice nowhere. And to celebrate my giving the Oscars the finger, here's a look back to my all-time favorite Oscars moment, namely when Robert Opel streaked behind David Niven during the 1974 show: 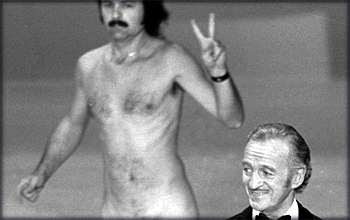 I will never forget that moment no matter how long I may live, and it was capped with Niven quipping something to the effect of "Isn't it fascinating to think that probably the only laugh that man will ever get in his life is by stripping off and showing his shortcomings?" My mother and I nearly laughed ourselves to death at that one, both of us nearly choking on the popcorn and soda we'd been feasting upon.

And now that NO COUNTRY FOR OLD MEN has won the coveted booby prize, mark my words that a porn parody entitled NO CUNT FOR OLD MEN will be unleashed fairly soon, hopefully starring Ron Jeremy and John Leslie in bad senior citizen makeup as two codgers who are refused pussy by every female they encounter — who instead opt to do other women who stroll into the scene for no reason — until they find a magic lamp or something that grants their wish. Trust yer Bunche, it's gonna happen, and remember you read it here first.
Posted by Bunche (pop culture ronin) at Monday, February 25, 2008

Let's not forget the old lady/lesbian version:
"No Men For Old Cunts"

I've read that this years telecast would likely prove to be the lowest rated of all time. I can only say that the vast majority of people who stayed away made the right choice. It was the dullest, most shockingly unentertaining Oscar telecast I'd ever saw. And I watch it EVERY year. I love Jon Stewart, but I've seen presidential speeches that were funnier than his opening monolgue. I seriously wished the writers hadn't ended their strike after watching this mess. Even Steve Carrell was lame!! Thats saying something!

I do have to add one addendum to my last post.
Jon Stewart deserves props for the way he handled the situation with the girl who got "music-intro'd" off the stage before she could even say "Thank you".
When the show came back from break, he ushered her back onto the stage so she could have her moment in the sun. I have never seen that happen in all the years I've watched the Oscar telecast.
Whatever I may have said about Stewart's monologue, this move showed that he is a very classy gentleman.