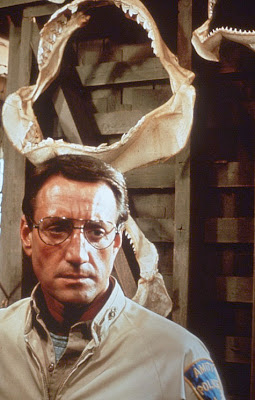 One of the defining moments of my formative filmgoing experiences was seeing JAWS, the film that for all intents and purposes put Steven Spielberg on the map, when it came out in the summer of 1975. My ten-year-old heart was already in love with the sea and sharks, so how could I fail to love a movie about a shark that was more or less playing the role of an implacable giant monster? If you’ve seen JAWS you know I don’t have to tell you what a cracking good man-versus-nature adventure story it is, but it’s hard to convey just what an edge-of-your-seat kick in the ass it was at the time, and it wouldn’t have worked half as well as it did without an absolutely perfect cast in place to pull it off, that cast being lead by bloodhound-faced Roy Scheider as Chief Brody of the Amity police force. Sure, Brody rose to the occasion, but his heroics were not those of a James Bond or a Bruce Lee — yeah, good luck taking down a thirty-foot Great White shark with a kung fu kick to the nuts — , instead being the utterly believable end result of a concerned and fed-up cop seeking to protect his community. The audience bought Brody’s out-of-his-depth humanity, and we loved him for it.

But for me Scheider’s performance of a lifetime came with 1979’s ALL THAT JAZZ, in which he played Bob Fosse’s self-destructive alter ego, Joe Gideon; I will say no more about it, other than to recommend that you see it immediately if you somehow overlooked it on cable or video rental. And also check out the grossly underrated and more or less forgotten 52 PICK-UP (1986), a gloriously sleazy modern noir about a bunch of blackmailing scumbags who try to gouge Scheider’s character for $100,000, only to discover the hard way that they fucked with the wrong guy. It’s a joy to witness Scheider’s character outsmart and thoroughly mess with the minds of his enemies, and Ann Margaret’s even along for the ride, so what’s not to like?

Rest well, Roy. You were one of the coolest things ever to rise from New Jersey, and you will be sorely missed.

From this morning's New York Times:

Roy Scheider, a stage actor with a background in the classics who became one of the leading figures in the American film renaissance of the 1970s, died on Sunday afternoon in Little Rock, Ark. He was 75 and lived in Sag Harbor, N.Y.

Mr. Scheider had suffered from multiple myeloma for several years, and died of complications from a staph infection, his wife, Brenda Seimer, said. Mr. Scheider’s rangy figure, gaunt face and emotional openness made him particularly appealing in everyman roles, most famously as the agonized police chief of “Jaws,” Steven Spielberg’s 1975 breakthrough hit, about a New England resort town haunted by the knowledge that a killer shark is preying on the local beaches.

Born in 1932 in Orange, N.J., Mr. Scheider earned his distinctive broken nose in the New Jersey Diamond Gloves Competition. He studied at Rutgers and at Franklin and Marshall College in Lancaster, Pa., where he graduated as a history major with the intention of going to law school. He served three years in the United States Air Force, rising to the rank of first lieutenant. When he was discharged, he returned to Franklin and Marshall to star in a production of “Richard III.”

His professional debut was as Mercutio in a 1961 New York Shakespeare Festival production of “Romeo and Juliet.” While continuing to work onstage, he made his movie debut in “The Curse of the Living Corpse” (1964), a low-budget horror film by the prolific schlockmeister Del Tenney. “He had to bend his knees to die into a moat full of quicksand up in Connecticut,” recalled Ms. Seimer, a documentary filmmaker. “He loved to demonstrate that.”

In 1977 Mr. Scheider worked with Mr. Friedkin again in “Sorcerer,” a big-budget remake of Henri-Georges Clouzot’s 1953 French thriller, “The Wages of Fear,” about transporting a dangerous load of nitroglycerine in South America. Offered a leading role in “The Deer Hunter” (1979), Mr. Scheider had to turn it down in order to fulfill his contract with Universal for a sequel to “Jaws.” (The part went to Robert De Niro.)

“Jaws 2” failed to recapture the appeal of the first film, but Mr. Scheider bounced back, accepting the principal role in Bob Fosse’s autobiographical phantasmagoria of 1979, “All That Jazz.” 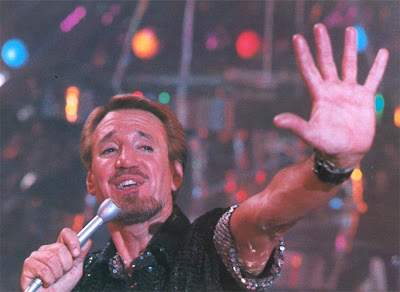 Roy Scheider in ALL THAT JAZZ (1979), Yer Bunche's vote for the actor's finest cinematic hour.

Equipped with Mr. Fosse’s Mephistophelean beard and manic drive, Mr. Scheider’s character, Joe Gideon, gobbled amphetamines in an attempt to stage a new Broadway show while completing the editing of a film (and pursuing a parade of alluring young women) — a monumental act of self-abuse that leads to open-heart surgery. This won Mr. Scheider an Academy Award nomination in the best actor category. (Dustin Hoffman won that year, for “Kramer vs. Kramer.”)

In 1980, Mr. Scheider returned to his first love, the stage, where his performance in a production of Harold Pinter’s “Betrayal” opposite Blythe Danner and Raul Julia earned him the Drama League of New York award for distinguished performance. Although he continued to be active in films, notably in Robert Benton’s “Still of the Night” (1982) and John Badham’s action spectacular “Blue Thunder” (1983), he moved from leading men to character roles, including an American spy in Fred Schepisi’s “Russia House” (1990) and a calculating Mafia don in “Romeo Is Bleeding” (1993).

One of the most memorable performances of his late career was as the sinister, wisecracking Dr. Benway in David Cronenberg’s adaptation of William S. Burroughs’s “Naked Lunch” (1991).

Living in Sag Harbor, Mr. Scheider continued to appear in films and lend his voice to documentaries, becoming, Ms. Seimer said, increasingly politically active. With the poet Kathy Engle, he helped to found the Hayground School in Bridgehampton, dedicated to creating an innovative, culturally diverse learning environment for local children. At the time of his death, Mr. Scheider was involved in a project to build a film studio in Florence, Italy, for a series about the history of the Renaissance.

Besides his wife, his survivors include three children, Christian Verrier Scheider and Molly Mae Scheider, with Ms. Seimer, and Maximillia Connelly Lord, from an earlier marriage, to Cynthia Bebout; a brother, Glenn Scheider of Summit, N.J.; and two grandchildren. 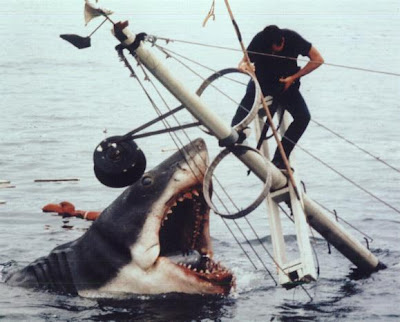 As a 10 year old, I was scared shitless by JAWS.
To this very day, I think about that flick whenever I'm near the ocean.
The scene where Hooper is diving that wreck and the head pops out, took about 5 years off my life.

Also, I'm glad you singled out 52 Pick Up, a movie that was most unfairly ignored.

He will be missed. And lets all just forget about Blue Thunder. Please.