I knew him first as Lt. Gerard from reruns of THE FUGITIVE, 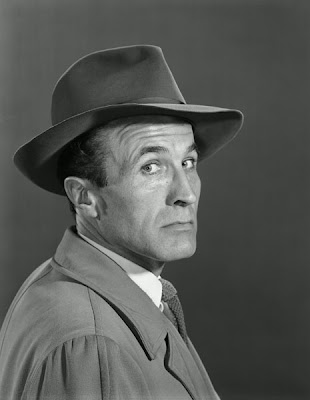 and later as Professor Bergman on SPACE: 1999,

but either way I always enjoyed the work of Barry Morse (Hey, SPACE: 1999 wasn't his fault). From today's New York Times:

Barry Morse, Who Played the Dogged Detective in ‘The Fugitive,’ Is Dead at 89
By DENNIS HEVESI
Published: February 5, 2008
Barry Morse, famous for his portrayal of the cold-hearted detective who relentlessly pursues the wrongly convicted Richard Kimble for four seasons in “The Fugitive,” one of the biggest TV hits of the 1960s, died Saturday in London. He was 89.

His death was confirmed by Robert E. Wood, a friend and a co-author of Mr. Morse’s autobiography, “Remember With Advantages: Chasing ‘The Fugitive’ and Other Stories From an Actor’s Life,” (McFarland & Company, 2007).

The slim, angular-faced Mr. Morse was trained at the Royal Academy of Dramatic Arts in London and played hundreds of roles on stage and screen in his seven-decade career but never quite escaped his role in “The Fugitive.” As Lt. Philip Gerard, he hounded David Janssen as Richard Kimble, the doctor from the fictional town of Stafford, Ind., who was convicted on flimsy evidence of murdering his wife. For 120 episodes, from 1963 through 1967, Lieutenant Gerard pursued Dr. Kimble, who had escaped — on the lieutenant’s watch — when the train taking him to death row derailed. The innocent doctor’s only hope was finding the real killer, a one-armed man. Gerard actually appeared in only 37 of the episodes, but his image was used in the opening credits, and the threat of his sudden appearance was never far from the mind of the fugitive or the audience.

For years after the series ended, Mr. Morse joked that “he was the most hated man in America,” Mr. Wood said of his friend on Monday. “Little old ladies would come up to him in airports and whack at him with their purses, screaming, ‘Why didn’t you leave that man alone?’ ” “When Barry went into a restaurant or a hotel,” Mr. Wood continued, “people would say, ‘Oh, you just missed him, lieutenant; he went that-a-way.’ ”

Though proud of the series, Mr. Morse was glad to take on many other roles. By his own estimate, he performed in 3,000 stage, screen, television and radio productions, in England, Canada and the United States. In the 1970s, he co-starred with Martin Landau in “Space 1999,” a science-fiction television series, made in England, about life on a lunar base. In it, he played Prof. Victor Bergman, the avuncular heart of the community. The series, syndicated in many countries, retains a cult following.

Two years ago, Mr. Morse played the president of Russia in the TV espionage thriller “Icon,” for the Hallmark Channel. Last year, in the film comedy “Promise Her Anything,” he played the ghost of a great-great-great grandfather who returns to a small Canadian town.

Mr. Morse appeared in many other television productions, including “The Outer Limits,” “The Untouchables,” “Naked City,” “The Defenders,” “Wagon Train,” “The Martian Chronicles” and “War and Remembrance.”

Herbert Morse (he changed his name to Barry) was born on June 10, 1918, in the slums of London’s East End, a son of Charles and Mary Hollis Morse. His parents owned a tobacco shop. When he was 15, Mr. Morse received a scholarship to the Royal Academy of Dramatic Arts. In 1941, after several years with touring companies throughout England, he made his West End debut in a play called “School for Slavery.” Two years earlier, he had married Sydney Sturgess, a Canadian actress. They had two children, both of whom became actors. Ms. Sturgess died in 1999. Mr. Morse’s daughter, Melanie, died in 2005. He is survived by his son, Hayward, of London; four grandchildren; and three great-grandchildren.

The family moved to Canada in the early 1950s, and Mr. Morse joined the Canadian Broadcasting Company. Among his roles in dozens of productions, Mr. Morse wrote, narrated and produced a half-hour CBC Radio series, “A Touch of Greasepaint,” which ran for 14 years. He appeared in so many Canadian television productions, Mr. Wood said, that “a critic back in the ’50s called him the test pattern for the CBC.”
Posted by Bunche (pop culture ronin) at Tuesday, February 05, 2008

What a terrific character actor. He will be missed.