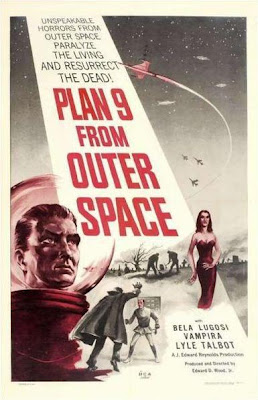 Yes, you read it right. Ed Wood's infamous so-called "worst film ever made" is the latest film to join the assembly line of unnecessary remakes churned out by a creatively bankrupt film industry. I love me some piss-poor movies and PLAN 9 FROM OUTER SPACE is one of my all-time favorites, containing more unintentional hilarity than most legitimate comedies as well as being the source of many iconic images found in the cheesy film pantheon. Tor Johnson, Vampira, Bela Lugosi, and the director's wife's chiropractor, along with those charming pie-plate-on-fishing -wire flying saucers all added up to jaw-droppingly inept fun, so why bother to remake a film that in every way is simultaneously terrible and a landmark? Unless it's totally rewritten, there's just no way to make this material viable. I is re-gusted, as they used to say on AMOS 'N' ANDY.
Posted by Bunche (pop culture ronin) at Tuesday, May 27, 2008

How do you RE-MAKE that film?

Hollywood's already capable of making terrible movies (10,000 B.C. comes to mind). Why - and HOW - could anyone re-make a terrible movie that's gloriously terrible BECAUSE OF WHO DID IT AND HOW AND WHEN IT WAS DONE?(*)

There must be some really great coke going 'round the producers' offices again...


-------------
* - The one potential saving grace: if they handled it as an authentically clever musical comedy, like Little Shop of Horrors or Reefer Madness. Of course, those remakes were based on stage-play versions of the originals, so I doubt that's the way they're going to tackle it.