DOCTOR WHO: SERIES FOUR (OF THE NEW STUFF)-Part 4 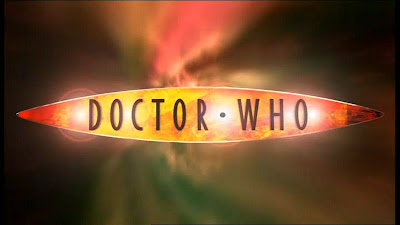 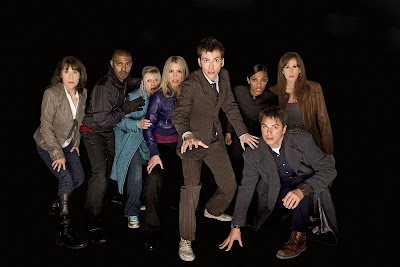 Fuck the Scooby Gang: it's the Who Crew!

The Earth is stolen from its orbit and transported to another galaxy where it finds itself among twenty-six other hijacked worlds, and as if that's not bad enough the Daleks show up and pretty much conquer the planet. Yeah, things are pretty damned dire, but the Doctor has a group of valiant (if not a small tad ragtag) supporters to help in the fight — dubbed "the Children of Time" by the Daleks — , namely UNIT agent Dr. Martha Jones, Captain Jack Harkness (crossing over from TORCHWOOD), Sarah Jane Smith (crossing over from THE SARAH JANE ADVENTURES), Rose Tyler, Mickey, and Rose's mum, Jackie (all having sneaked in from the parallel universe from which all of them could supposedly never return). As that motley crew does what they can to combat the Daleks, the Doctor and Donna make a beeline to the Shadow Proclamation to find out just what the hell is going on and hopefully get some help, but when they arrive the Doctor discovers that planets have been kidnapped out of time as well as space, and that when properly aligned the fit together to perform some sinister purpose. Meanwhile on Earth, Martha Jones is entrusted with "the Osterhagen Key," a key to be used only when things look bleakest for the Earth, and she makes her way to Germany to put the key to use. A whole bunch of other stuff happens, including the umpteenth return of Davros, creator of the Daleks, 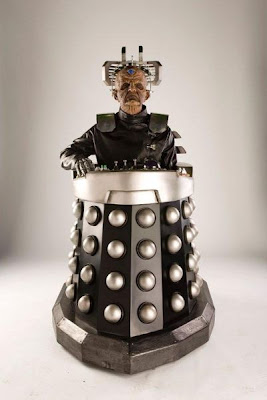 The new, improved Davros, with a bitchin' metal gauntlet.
and the Doctor getting shot by a Dalek and starting his regeneration process again, all of which leads to the best cliffhanger in sci-fi TV since STAR TREK: THE NEXT GENERATION's "The Best of Both Worlds Part 1."
Episode 13-"Journey's End" 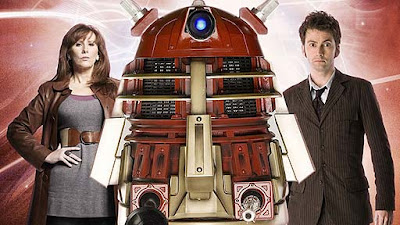 After the Doctor regenerates enough to heal from the Dalek blast, he transfers the remaining regenerative energy into his severed hand (kept in a jar in the TARDIS' control room) and opts not to change his appearance, while Martha discovers that the Osterhagen Key enables the detonation of twenty-five nuclear bombs hidden beneath the Earth's crust, completely obliterating the planet but not allowing it to fall into alien hands. Then a whole lot of convoluted and idiotic shit happens, including:
But the most appalling development is the final fate of Donna Noble, a character who when introduced was grating in the extreme, but as she progressed she became one of the classic companions and the audience grew to love her. But, I guess because of Catherine Tate's other commitments, they wrote Donna out by having her turn out to be highly unstable once she became half-Time Lord, necessitating the Doctor to erase her memories of all the time she spent with him and strip her of her Time Lordiness, finally stranding her back in her mundane existence none the wiser. As the Doctor set off once more into time and space, alone and not scheduled to resume a regular full series until 2010, I almost threw my TV out the window and loudly cursed Russell T. Davies — the series' executive producer and head writer since the show's relaunch in 2005 — for fucking a good thing straight up the ass before his announced departure. My hot and brilliant pal Red Stapler warned me about this and when asked to lend her words to this post by way of a second opinion on the awfulness, she allowed me to crib the following from her own live journal:

Boy, am I mad at what happened to Donna. Like, wow.

RTD Catherine Tate did an amazing job of taking the most irritating character I have ever seen on a show, and turning her into the most amazing personification of AWESOME ever. Every week, Donna became more and more awesome. So to take her memories away? To negate the last two years of her life? Oh fuck YOU, RTD. Fuck you twice.

While Donna is inherently awesome, it was meeting the Doctor that made her realize it. She may one day yet be awesome again, but yikes. Way to cut someone's emotional growth off at the knees. I wanted to see Donna on Torchwood. THAT would have been rad. (Mickey? Really?)

I haven't written about the finale yet. I knew as soon as it was over what bit would stick with me, and why. And I wasn't incorrect. The whole bit about The Other Doctor, and sending Rose back to Pete's Universe just....what. Mickey got to come home, why not Rose? And The Other Doctor? WHAT? It's like bad fanfic. I mean, I get why, and textually, I'm glad it happened, but what. I've been in long distance relationships. I've been the wild-might-have-been. I've wondered what would happen if...? In short, I've been Rose. And I've never gotten "my clone-of-the-object-of-my-desire;" it's like the ultimate wish fulfillment, in everything. Not just Doctor Who. I'm frustrated enough with the wild-might-have-beens and almost-was's and maybe-will-be's of my own life; I wasn't really interested in seeing a "Staples-Easy-Button Happy" resolution of one in the finale of Doctor Who.

Well said, RS. I'll give the new stuff a chance, but this season ender was every bit as bad as part 2 of STTNG's "The Best of Both Worlds" and in many ways is far, far worse. But when taken as a whole, series four only had two outright stinkers — "Midnight" and "Journey's End" — and a horrible Christmas special to hold it back from being an across the board winner, and when you only have thirteen episodes per year (and one Christmas special) that's not a terrible average.