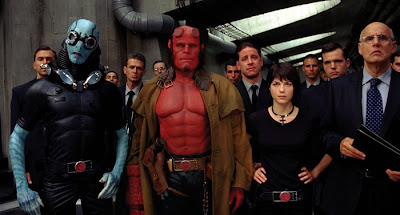 It’s official: I must now come out of the closet because of my overwhelming desire to give director Guillermo Del Toro some serious lovin’ with hugs and much tongue for giving me exactly what I have needed to see for a long, long time, namely a monster movie designed to please its audience in every way. HELLBOY II: THE GOLDEN ARMY is Christmas Day for every “monster kid” everywhere, even those of us who left our childhoods behind decades ago.

Now that the origin details are over with — as seen a few years back in the previous flick — the story jumps straight into the action as Hellboy (Ron Perlman) and his colleagues in the Bureau of Paranormal Research and Defense (or B.P.R.D. for short) contend with monster prince Nuada’s (Luke Goss) efforts to locate the final piece of a crown that will grant him total control over the Golden Army, a massive magical/mechanical fighting force with which he intends to put an end to the human race and claim the Earth for his supernatural brethren. This prince is not just some mustache-twirling baddie, however, and his agenda is motivated by legitimate grievances that give pause to Hellboy, especially after his intentional “outing” of himself and the B.P.R.D. and his subsequent discovery that the humans he protect are scared shitless of him and his colleagues. Thrown into this mix is the prince’s twin sister, Nuala (Anna Walton), 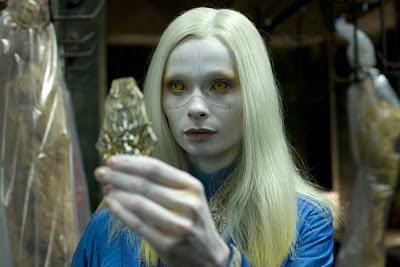 a sweet, pretty monstress who sides with the B.P.R.D. and feels the reciprocated stirrings of romance with sensitive resident Creature-From-the-Black-Lagoon-type Abe Sapien (Doug Jones), alongside a look into what’s up now that Hellboy and pyrokine Liz Sherman (Selma Blair) have stopped dancing around the obvious issue and become lovers. All of this adds up to a fun movie, but what sends it into must-see monster-fan Nirvana is the unashamed and wall-to-wall inclusion of a veritable shitload of monsters and creatures of damned near every shape and size that the imagination could come up with; huge, tiny, winged, tentacled, having a cathedral for a head (I shit you not), they’re all on display, and if you aren’t satisfied with the monster on screen at a given moment, just wait about another minute and there will be at the very least two more to give you something wondrous to behold. 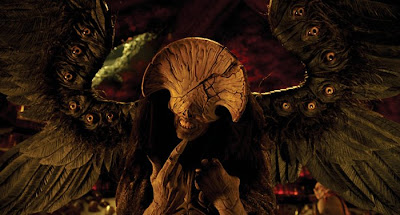 I mean, just look at this! And wait 'til you see him move and speak!

That said, here are a few points of interest:

• You will never look at the Tooth Fairy in the same way again. 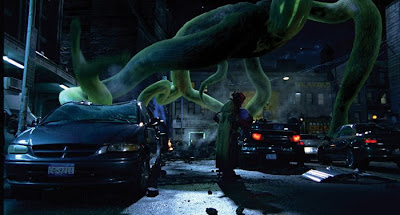 • The “human torch” effects for Liz Sherman blow away those found in either of those shitty FANTASTIC FOUR movies.

• The “bad guy” has every right to be pissed off and you kind of want to root for him. 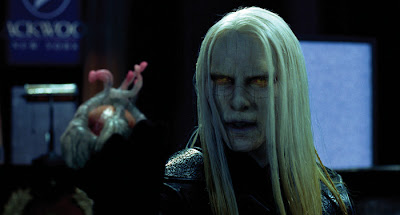 • Abe Sapien comes into his own as a character in this one and he’s simply impossible not to love. 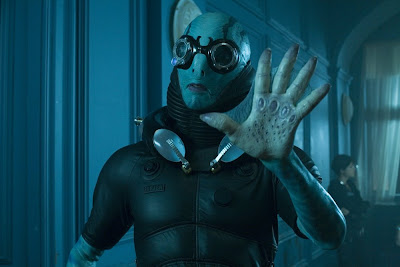 • The inclusion of Teutonic ghost-in-a-containment suit Johann Krauss was great (Johann’s one of my favorite characters in the comics), but the unexpected coup is that the voice acting of Seth McFarlane in the role steals every scene the character is in. Yes, I’m talking about the same Seth McFarlane who voices Peter, Stewie, and Brian on the increasingly derivative and irritating FAMILY GUY, and he sounds completely unlike any of the work he does on that show. McFarlane even gets to utter an instant classic of a line: “You can suck my ectoplasmic schvanstucker!” 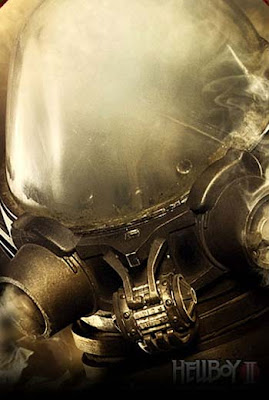 • The romance angle works to good effect and in no way detracts from all the cool monster stuff. 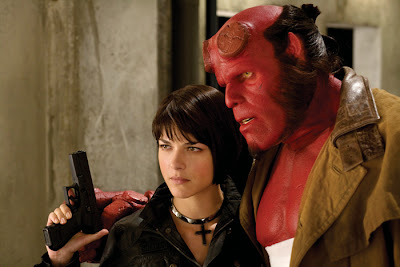 • This film offers yet more proof that some seriously weird shit goes on at the foot of the Brooklyn Bridge every day.

• The film’s art direction is simply stunning, and Del Toro’s well-publicized affection for old school effects like those of Ray Harryhausen is plainly evident in every frame. The use of makeup effects and animatronic critters outweighs the CGI imagery, and the CGI seamlessly blends with the physical effects rather than overwhelming the movie’s “reality” as the majority of CGI tends to do in countless other sci-fi/fantasy/horror/superhero flicks.

HELLBOY II: THE GOLDEN ARMY sets out from frame one to be a crowd-pleaser, especially if that crowd happens to be composed of monster-freaks like me, so if you are of a like mind, TRUST YER BUNCHE when I say you simply have to see this one on the big screen as soon as possible. Thus far HELLBOY II: THE GOLDEN ARMY is my favorite of this season’s escapist offerings, and is right up there with IRON MAN as the crown jewel in this summer of the comic book hero. Let’s hope the upcoming DARK KNIGHT is even half as much fun.
Posted by Bunche (pop culture ronin) at Saturday, July 12, 2008

I'm so looking forward to seeing this. Somehow, I doubt Dark Knight will be nearly as good.