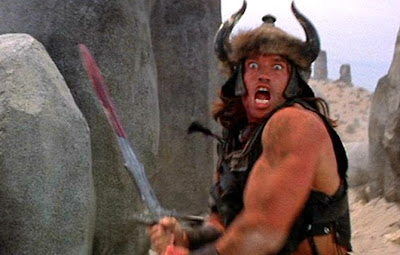 WARLORD: Conan! What is best in life?
CONAN (with utmost conviction): To crush your enemies, to see them driven before you, and to hear the lamentation of their women!

I unashamedly love me some ancient warrior flicks, but that genre is replete with cheapjack garbage and turgid stories propelled on naught but gore and titties, admittedly two of my favorite draws, but when presented with the potential for fantasy and adventure in far-flung lands where just about anything can happen you really need more than just jugs and jugular spray. You need a solid story, and all-too-few films in the sword & sorcery arena fall sadly short of the mark in that department. One of the few that absolutely lives up to the potential of the genre is the first of the two flicks based on legendary pulp scribe Robert E. Howard's Conan character, a burly, sword-wielding badass who's been slashing his way through pop culture since the 1930's, first in a series of pulp magazine stories and later in a long-running assortment of comic book titles. Since his introduction, Conan has become a common touchstone for fantasy and adventure enthusiasts worldwide, and it was inevitable that he would one day explode onto the big screen.

The first Conan flick gives us our hero's origin, a blood-drenched journey from childhood in a hard warrior tribe to years of strength-building slavery, followed by even more years of being trained to fight in all extant forms of combat as well as time served as a professional gladiator. (There's some book-learnin' throw in there too, but who cares about that?) Once freed by his owner — a guy smart enough to know a dangerous animal when he sees one — Conan begins a life of wandering that brings him into contact with Asian archer/thief Subotai (played by surfin' badass Gerry Lopez) 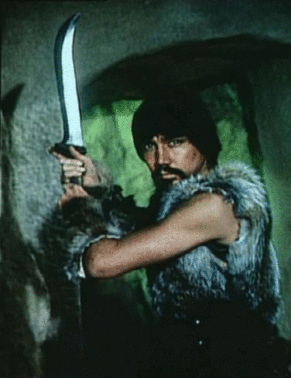 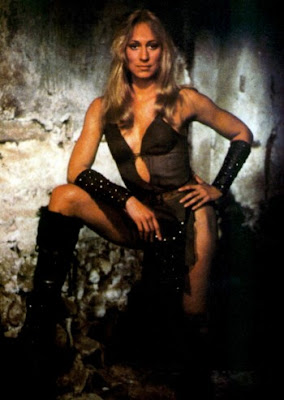 and the trio merrily pillage their way across the Hyborean Age landscape. But Conan soon decides to avenge his tribe's decimation by the forces of shapeshifting wizard/asshole Thulsa Doom (James Earl Jones in the most ridiculous wig you'll ever lay eyes on) and also reclaim the sword forged by his father and stolen by Doom. Much mayhem occurs, and the whole thing feels like an old time swashbuckler updated for grownups by the inclusion of gory violence and nekkid titties, as well as a bizarre wizard played by ubiquitous rent-an-Asian Mako and an endearingly bogus giant snake that wouldn't look out of place in the Macy's Thanksgiving Day Parade. All of the elements found in this film would go on to be aped and ripped off for nearly the next decade with varying degrees of success, but this one had the budget, cast and script to allow it to work far better than it had any right to.

Directed by uber-manly screenwriter John (MAGNUM FORCE) Milius, CONAN THE BARBARIAN wallows in its efforts at myth-making and comes about as close to a Kurosawa-style warrior narrative as American cinema is capable of, only obviously minus that filmmaking genius' skills behind the camera; I invoke Kurosawa here because of the tone of the film and its focus on what's going through its protagonist's head rather than just being an excuse to turn loose some oiled-up slab of beef in a loin cloth, so please don't think I've completely lost my mind and am in any way equating this admittedly fun film with a masterpiece like SEVEN SAMURAI (1954), probably the greatest film ever made about warriors, as well as being a movie that often is considered to be the best film of any kind, made by anyone anywhere, period.

This is the movie that really put Ah-nuld Schwarzennegger on the map as an action star and paved the way for his domination of the eighties action genre following the box office and critical smash that was 1984's THE TERMINATOR, and as good as he was portraying an emotionless, implacable literal killing machine from the future, I think his performance as Conan is far more impressive because he imbues the hulking barbarian with a simultaneous lust for life and a deep melancholy that draws the viewer in and makes us care about him far more than just about any other sword-wielding muscleman character that I can think of. His Austrian accent works well for him here as well, giving Conan the right air of Teutonic harshness when he's called on to speak and emote. This is especially true in a scene edited from the film's theatrical release but restored on DVD, in which Conan, while preparing for the ultra-violent final battle against Doom's top soldiers, expresses to Subotai his weariness of a life composed almost entirely of fighting and killing, blurting out something to the effect of how he's just completely fucking sick of it all. I guess that bit was edited because it was perceived as delaying the climactic melee, but if you ask me that piece of dialogue sums up the whole of Conan's experiences and makes the film.

But despite a strong opening film in the franchise and the 1980's sword & sorcery fad being in full swing, 1984's CONAN THE DESTROYER sucked as hard as you mother during Fleet Week and essentially brought the series to a screeching halt. A ton of other cruddy S & S flicks reared their ugly heads — KRULL, THE BARBARIANS, DEATHSTALKER, ATOR THE FIGHTING EAGLE, RED SONJA, CONQUEST, and the ultra-ludicrous and downright hilarious SORCERESS to name but a few — eventually leading the genre to lay fallow pretty much until Peter Jackson took the reigns and revived things with his epic LORD OF THE RINGS trilogy, but now there's word of relaunching Conan for the 2000's, and if done well I welcome it like I would open my arms to a visit from a certain red-haired ex-girlfriend who looked stunning sans clothing. But knowing the way Hollywood is currently leaning and the trend of unwisely rating certain properties PG-13 in order to potentially draw in more ticket buyers — LIVE FREE OR DIE HARD, anyone? — , I wouldn't be surprised to see the new Conan flick sacrifice much of what made the original such a treasure, diluting the adult elements and casting some 'roided-up pretty boy in the role as cheesy, generic speed metal blares on the soundtrack (a la Kevin Sorbo's turn in the awful KULL THE CONQUEROR). Let's hope that the studio doesn't pussy out and will give us a proper return for our marble-mouthed hero. 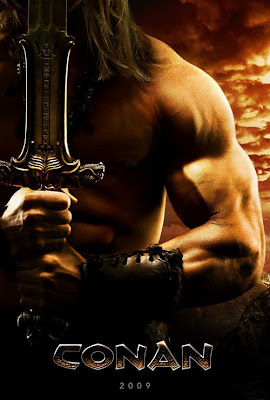 You know the studio's going to hire some WWF asshole to play Conan and wimp it down to a PG-13 IF you're lucky... Could PG be possible?

I didn't forget THE BEASTMASTER or THE SWORD AND THE SORCERER; they were excluded from the list because I don't find them to be "cruddy" like the others mentioned. Cheesy, yes. Cruddy, no.

I must be missing a link in my geek DNA, but I fucking hate both Conan films. The first was far better than the second, but I really want to see a Conan film that employs buff ACTORS with lush settings and Frazettian art/ costume design (as per 300 or Pathfinder) rather than bodybuilders running around deserts in bulky loincloths (as per the 1980s thud & blunder flicks).

Also, I'm hoping that the new Conan film's producers look to the hard-R territory of 300 or Sin City (both of which made tons of money) rather than Live Free and Die Hard (which wussed out and lost tons of money). Yeah, 300, Pathfinder and Sin City had their problems too, but I'd much rather see that approach taken than sit through another Schwartzeneggar Conan.

Regarding a Conan movie a la Sin City or 300... Oh, I didn't realize that Pixar had acquired the Robert E. Howard characters!

I would rather watch Deathstalker on endless loop for a year than sit through some goony, cartoon, fake-ass, green-screen, fighting-with-a-tennis-ball, Star-Wars-prequils version of fucking Conan.