WHEN BROADWAY IS A MIRROR: PASSING STRANGE 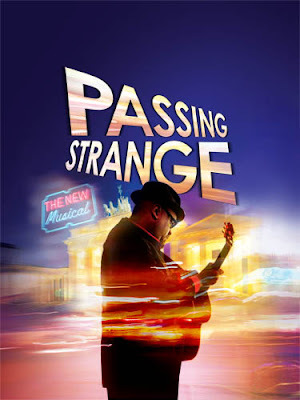 A little over a month ago my favorite green-eyed computer goddess, Suzi, saw the critically acclaimed Broadway musical PASSING STRANGE and immediately called me afterward to tell me I had to see it "because it's you, Bunche!" She didn't really go into the details, but she insisted that I let her take me to see it as a belated birthday present.

While I've been well-versed in musicals, both live and cinematic, I've largely avoided Broadway shows since the early eighties because I've felt that they offered nothing that appealed to me after the original run of the exceptional SWEENEY TODD (Cannibalism? Murder? Gore? Sondheim? What's not to love?), instead catering mostly to the tourist trade and offering "safe" and nauseating family fare like those Disney movie retreads that infest the place (MARY POPPINS, THE LITTLE MERMAID, BEAUTY AND THE BEAST, and the execrable TARZAN; as for THE LION KING, I didn't like the movie in the first place, but when I was dragged to the show I have to admit that I enjoyed the sets and costume design). And if it's not that kind of pap it's "jukebox" musicals like MAMMA MIA (I would rather suck Captain Lou Albano's cock on live international television than sit through that two-hours-plus Abba karaoke-fest, songs I was completely fucking sick of thirty years ago) or screen-to-stage translations of non-Disney stuff like YOUNG FRANKENSTEIN, CRYBABY, and SPAMALOT, stripping each of the qualities that made them worthwhile as films; regarding SPAMALOT, which I've heard is allegedly good, I cannot see it because as a Monty Python fanatic why the fuck would I want to see their material performed by people other than them? They even made the plot of MONTY PYTHON AND THE HOLY GRAIL into a coherent narrative and managed to shoehorn material from other Python works into it, so it ain't for me and I say leave it to the tourists.

Now that you've got a clue as to my stance on Broadway you can see how I may have approached PASSING STRANGE with a certain amount of trepidation, but I trust Suzi's judgment implicitly (she hates musicals) and I was also aware of the show's driving force, a Californian musician named Stew whose music I was introduced to a couple of years ago by my friends Velma and Soren. Stew's the rare black guy who not only rocks out as opposed to doing hip-hop, but also shreds like a motherfucker on the guitar, so I was cool with him from the get-go. 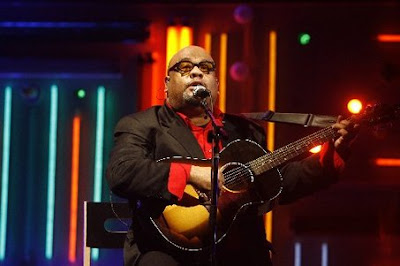 Narrator/writer/performer Stew.
Anyway, Saturday rolls around and Suzi and I embark for a posh evening at the theater (she looks mouth-watering in a black dress, with an eye-catching bauble nestled just atop her fantastic cleavage), preceded by dinner and drinks at St. Andrew's, an excellent bar/restaurant right across the street from the theater on 44th Street where I ate the single best burger of my entire life (I'm going back as soon as I can, believe that!). After we ate and caught a mild buzz, we wandered across the street and took our seats, reveling in the fact that we were seeing the show on the next to last night it was being performed, and that we were in attendance as Spike Lee, a fan of the show, filmed it for posterity and a possible theatrical release.

After Spike came out to greet the audience and request that we show enthusiasm, the lights dimmed and about three minutes later my mouth hung open in shock and astonishment as Suzi's words proved accurate: PASSING STRANGE was a weird experience for me because it was indeed quite similar to many elements of my own life. The story is about a young black musician (Daniel Breaker) from an upper middle class background who for the most part doesn't relate to other black people and immerses himself in punk rock. 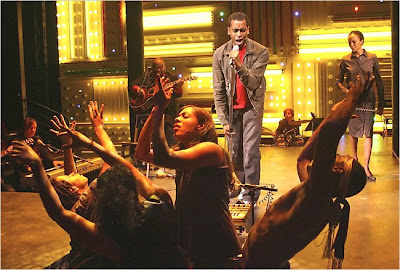 Daniel Breaker and the cast evoke Amsterdam.
Seeking to escape from his churchy and suffocating mother who won't let him grow up and be himself, he begins smoking pot and has an epiphany that directs him to leave home and got to Amsterdam, there to begin his journey of self-discovery. There he discovers more sex and drugs than he knows what to do with, and for the first time finds himself in a place where he is accepted and understood unconditionally, a state of being that opens his creative floodgates. He later moves to Berlin for more artistic and political expansion, all the while becoming more distant from his mother who still cannot understand why he has left home, tellingly revealing that her alleged concerns about her son are actually concerns about herself and how she'll cope without having him to constantly focus upon.

That's pretty much it in a nutshell, and while I did not find myself by going to other countries, there was much in the story that I have lived:
Let me tell you that while I had a great time at PASSING STRANGE, it was quite a kick in the head to sit through a show that was like somebody having reached into my own personal experiences and bringing them to life on the (ironically) Great White Way. It realy gave me a lot to think about, most especially that if this story could have made it to Broadway, I am not alone in my experiences. I already knew that, but to see that translated into entertainment was something new for me.

So when Spike Lee's filmic document of PASSING STRANGE is released in whatever format, I strongly urge you to see it. It was excellent in every way, but I'm not surprised it lost the Best Musical honor to THE HEIGHTS because it's not your traditional Broadway feel-good affair, and rocks very hard and very loud. Rock on, Stew. Rock on. 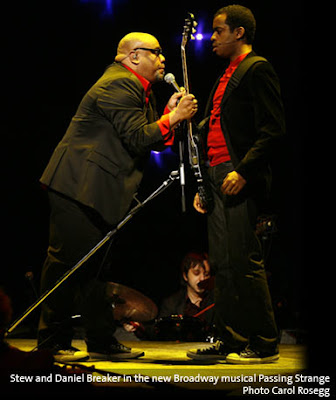