ON THE SIDEWALKS OF NEW YORK: STRAY PUSSY

I tell ya, it's shit like this that makes me love living in New York.

I just took a break from proofing inane sports cards and went downstairs to grab a dirty-water dog (translation: a hot dog), and as I was about to cross the street I noticed something odd laying on the sidewalk next to some garbage that one of the local bums was rummaging through. 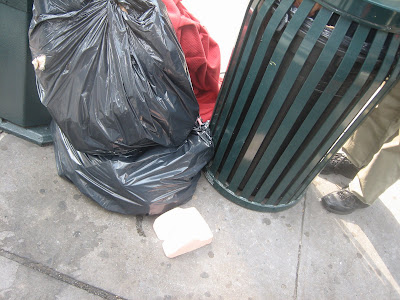 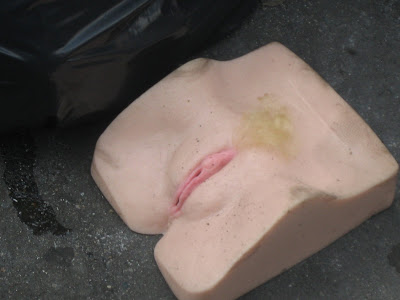 Bearing absolutely none of the attributes that make the real thing so awesome — such as being a functioning component of a living, breathing, communicating woman — this discarded bit of foam latex street meat just sat there, used up and relegated to the trash heap, looking not unlike some strange bit of sea-life that had washed ashore along with the random detritus common to the local beaches. Needless to say, I had to photograph this unintentional (?) comment on consumerism and the devaluing of the sacred, and as I walked away after taking these pics two sweet-faced office girls were crossing the street and approaching the lonely sidewalk chocha. As they were about to mount the sidewalk they both saw Pavement Puss and recoiled in horror and disgust, shrieking like sitcom housewives perched atop a chair as a mouse ran about the kitchen floor.