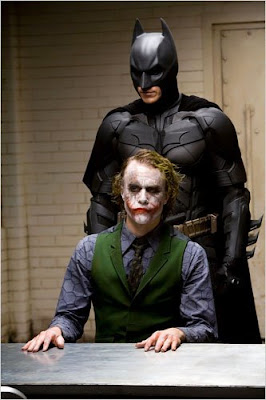 Well, it looks like Hell has apparently finally frozen over. I’ve taken some time to process what I’m about to say because I never thought I’d be able to write the following words:

I know, I know! I find it hard to believe too, but I shit you not, it’s true. THE DARK KNIGHT is a very, very good Batman movie. However, that said, do not believe the hype. It’s not worthy of the Nobel Peace Prize and it doesn’t take the superhero movie to the next level (whatever the hell that may be). It’s simply a well-made, well-told thriller that’s definitely worth sitting through, and I don’t say that solely because I went in with absolutely zero expectations, especially after enduring the over-amped hype machine that has fueled audience anticipation since Heath Ledger’s untimely and unexpected demise.

I’m not going to give away the plot, but by now you know that Ledger’s turn as the Joker has garnered universal critical plaudits, and I have to say I agree with the general consensus. Ledger’s the first actor to make the Joker utterly unpredictable and downright scary, and I applaud the work that he did immensely. As a matter of fact the Joker simply owns the movie from the second he hits the screen, and while Christian Bale does a serviceable job as the Batman, the Joker’s chilling antics reduce Batman to a guest star in his own movie. And let’s not forget that Harvey Dent (Aaron Eckhart) is also involved, and Batman fans know what that means…

I do have to warn potential viewers that the film is way too long for the story it has to tell — it has a running time of 152 minutes, and that’s not counting the six (!!!) trailers that preceded it — and that length is only compounded by the occasional slow stretch and the film’s relentlessly downbeat and depressing content. And for a comic book-based film it’s pretty damned intense, so the length and the edginess may not sit well with the little ones.

And while I won’t give away the plot, I have to mention a few of things I really loved:

• The Joker’s “magic trick.”
• The truly shocking look for Harvey Dent during the movie’s final third. Hardcore nightmare fuel, folks.
• The “Bat Pod,” a modernized version of the Bat-Cycle that looks like Batman borrowed it from Judge Dredd. Most kickass-cool vehicle in a superhero movie since I can’t remember when.
• Bruce Wayne’s mission in Hong Kong.
• Eric Roberts. (I can't help myself. I just like the guy.)

So TRUST YER BUNCHE and see THE DARK KNIGHT for yourself, just ignore the hype and go in expecting a decent flick. 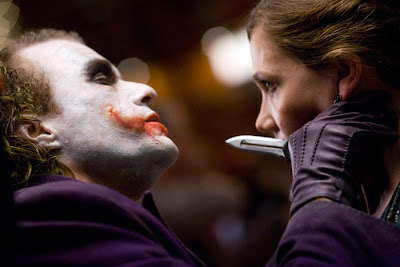 I absolutely agree 100% to everything you wrote. The sad thing is if they ever use Joker again it just won't be the same without Heath Ledger doing it. I feel bad for the next guy. I was lucky as I saw it at a screening so the only trailer was for a different WB movie - Guy Ritchie's RocknRolla - looks funny but just another of the same old same old from Guy Ritchie. I actually felt myself getting a little restless during the slower moments but I did enjoy basically the entire film. Don't know how they are going to match this one.

No Nobel Peace Prize?!!!!?? Well forget it then! I refuse to see the fucking thing!

C'mon. The Joker looks like he just gave a sloppy BJ.