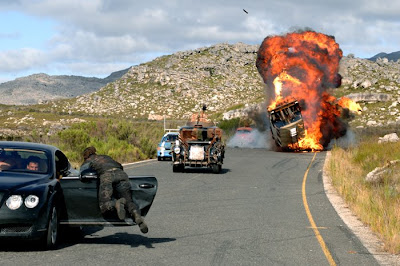 No one involved in the making of this film ever saw THE ROAD WARRIOR. Nope. No way.

Sometimes I just don’t understand what the fuck is wrong with movie critics. These so-called arbiters of quality and taste love to throw their encyclopedic knowledge about film genres in your face — I know I do — so one would think they’d be cognizant enough to get what a particular filmmaker is attempting to craft within the parameters of a given area of storytelling. Which brings me to the inexplicable critical disdain held for director Neil Marshall’s DOOMSDAY, a film that came and went in the blink of an eye and was tarred as a flagrant ripoff of any number of post-apocalyptic movies from roughly the past three decades. I had suspicions about the lambasting the film endured because I loved Marshall's two previous features, namely the stunning DOG SOLDIERS (2002) — the best werewolf flick since AN AMERICAN WEREWOLF IN LONDON — and THE DESCENT (2005), but I somehow never got around to seeing DOOMSDAY in the theater for the .02 seconds it ran, and seeing how fast it left the various multiplexes I figured that maybe the critics may have been right in their assessment.

Oh, how wrong I was, and lemme tell ya I won’t make the mistake of missing another one of Marshall’s films when it’s fresh. DOOMSDAY would have been a blast to see it the visually opulent but actually rather ghetto multiplex that I frequent over on Court Street in Brooklyn, since the audiences there get into flicks loaded with ultra-violence with the same zeal one would expect from those in the cheap seats during the days of the bloody spectacles found in the Roman Colosseum.

On a whim I sat through the unrated DVD of DOOMSDAY last night, and from start to finish a huge grin was plastered across my face. It’s a love letter to many of the director’s favorite visceral action/exploitation/sci-fi/horror flicks, most obviously ESCAPE FROM NEW YORK and THE ROAD WARRIOR (MAD MAX 2), with helpings of the original MAD MAX thrown in for good measure, but the seasoned genre goon will practically be buried beneath nods to ALIENS, DAMNATION ALLEY, 28 DAYS LATER, EXCALIBUR, RESERVOIR DOGS and even THE WARRIORS. Many pooh-poohed this aspect of the film as “unoriginal” and “derivative,” but Marshall is the first to state on the record that his intent was to cherry pick from the films he’d loved so much and throw them together as an answer to all those genre parodies/homages that have come out in recent years, only this time being just as crazy and outrageously over-the-top but handled here with a completely straight face, or as he himself put it, "Right from the start, I wanted my film to be an homage to these sorts of movies, and deliberately so. I wanted to make a movie for a new generation of audience that hadn't seen those movies in the cinema—hadn't seen them at all maybe—and to give them the same thrill that I got from watching them. But kind of contemporize it, pump up the action and the blood and guts." And I’ll be goddamned if it doesn’t work. If you go in knowing DOOMSDAY’s a genre flick “greatest hits” cornucopia and not THE FRENCH LIEUTENANT'S WOMAN, I’d bet you’ll have a good time with it.

In 2008 the deadly Reaper Virus turns Glasgow, Scotland into a charnel house and the government sends troops to cordon the place off and prevent the disease from getting out. As the military vainly attempts to quells thousands of crazed and fearful rioters, a mother manages to get past the throng with her little girl (who loses her right eye in the process) and hand the child to fleeing soldiers in a helicopter. After that we’re given an info lesson nearly identical to the one seen at the beginning of ESCAPE FROM NEW YORK, only this time around it details the erecting of a wall to cut Scotland off from England and the country’s subsequent quarantine from the rest of the world that’s enforced by turning the area into a no-fly zone and mining the surrounding waters as heavily armed vessels patrol the coastline. Many of those stuck within the hot zone perish horribly from the virus (that apparently turns your flesh into a landscape of boils and pus while making you spew chunks like Regan MacNeil), while the survivors immediately devolve into a state of complete and utter lawlessness that results in murder, rape and cannibalism becoming par for the course. Though promised help by the government, the people of Scotland are basically left to die and the Reaper virus is pretty much ignored or forgotten until it resurfaces in 2033, this time in the heart of London. The government has secretly kept tabs on what’s gone down in Scotland for the past twenty-five years via satellite and discover that there are thriving groups of people running about the place so there must have been a cure discovered by Kane (my man Malcolm McDowell), a doctor who ended up stranded in behind the wall when the quarantine went into effect. The government sends Major Sinclair (Rhona Mitra) — once the aforementioned little girl — , leading a crack medical/military team, through the barricade to track down Kane and bring back the cure, thus making a hero out of the useless Prime Minister (DEEP SPACE NINE’S Alexander “Dr. Bashir” Siddig), or more accurately his vile puppeteer, Canaris (David O’Hara). But what no one planned for is the living nightmare awaiting the Major and her team once they pass through the wall; the place is infested with ravening punker/barbarian tribes familiar to anyone who saw THE ROAD WARRIOR, only about a hundred times nastier, and their equally brutal but more upscale counterparts who’ve based their society on a medieval theme, complete with outfits that would be right at home in a King Arthur or Robin Hood movie. From the second the heroes cross into Scotland all bets are off, and the movie morphs into a high octane, ball-kicking, skull-crushing, flesh-eating study in giving the fans of barely coherent ultra-violence exactly what they want by the truckload, and, dumb as it is, I enjoyed every moment of it. 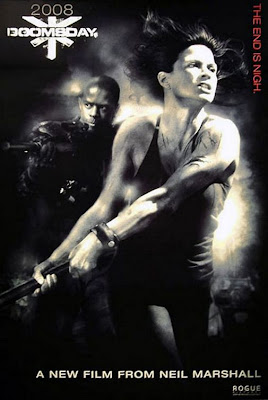 Major Sinclair: don't give her no sass, or she'll kick your ass!!!
Rhona Mitra’s a revelation as Major Sinclair, and comes from out of nowhere to assume a well-deserved place among the pantheon of harder-than-hard woman warrior heroes alongside Sarah Conner (T2 version), Beatrix Kiddo, Charlie Baltimore, Ellen Ripley and Coffy. Sinclair is one seriously badassed motherfucker whose martial skill set would give even Modesty Blaise pause, what with being quite proficient and effective with a variety of ordnance and hand-to-hand techniques, as well as making very intelligent use f her cybernetic right eye. She’s all business and more than up to putting her combat boot right up the ass of anyone stupid enough to give her any shit, as is proven many times before the film’s climax. 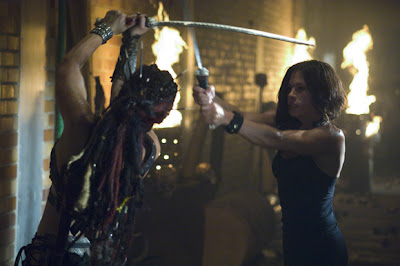 The film also includes car chases straight out of the Mad Max series that test their vehicles to the limit and beyond (as well as giving me a hard-on for a black Bentley), a jarring transition in tone from the Mad Max stuff to the medieval angle that will literally make you exclaim “What the fuck???,” gladiatorial combat pitting an unarmed Sinclair against a fully-armored knight who goes after her with a spear and Morningstar, 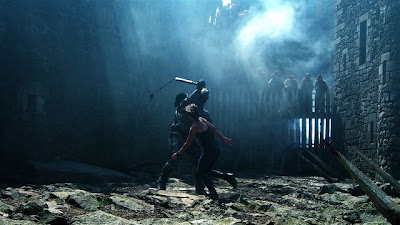 automatic weapons-a-blazin’ a la ALIENS, warrior cannibals proving they know how to party by merrily boogieing down to Adam & the Ants’ “Dog Eat Dog” and Bad Manners’ version of the Can Can before committing a truly appalling act of sadistic execution and anthropophagy, a cookout that you’d want absolutely no part of, and a ton of other balls-out madness that leads to the most perfect — if admittedly nonsensical — ending one could come up with for a story this wild and wooly. 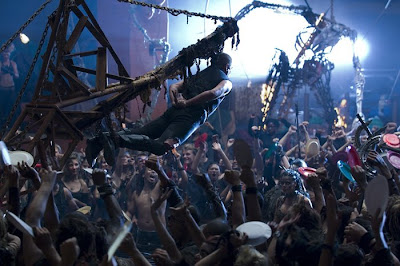 Sean Pertwee — son of John Pertwee, aka the third Doctor Who — prepares to meet one of the worst fates in recent film history. 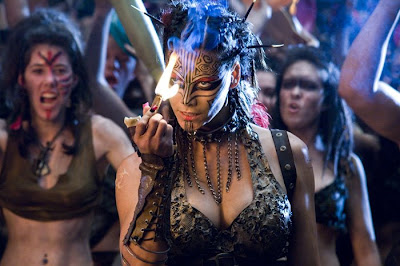 It only takes a spark... 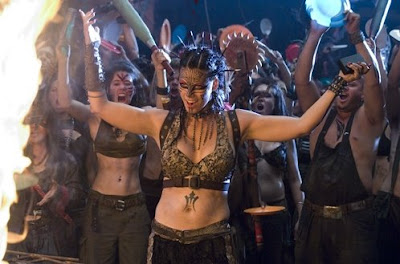 ...to ignite the Cookout of the Damned!
Yes, DOOMSDAY is every bit as derivative and unoriginal as claimed, but it’s so knowingly playing with the influences it wears on its sleeve that, as the director himself says, it’s “so outrageous you've got to laugh.” The fact that it’s all played straight only adds to its madness, and it’s got nothing on its mind other than to entertain the grindhouse crowd, and it succeeds mightily at that task. So for that humanitarian intent I love every mussed-up hair on DOOMSDAY’s hopelessly insane, schizophrenic head, and strongly urge you to check it out for yourself. It falls very much into the same territory as GRINDHOUSE — especially the PLANET TERROR half — so if you got a kick out of that, TRUST YER BUNCHE and add this crazy motherfucker to your NetFlix queue immediately!

(Oh, and watching this with a six-pack or some illegal smokables wouldn’t be a bad idea; I saw it straight, but it transported me back to my salad days of watching questionable cinema in theaters like the Sono Cinema and the late, great Norwalk Theater, entry into both of which guaranteed at least a contact high, and if you negotiated wisely you could trade some of your popcorn for a Budweiser or two from one of the already-wasted neighborhood bums who bought tickets so they’d have a place to sleep it off undisturbed since it was highly unlikely that the ushers would bother to kick them out. Ah, memories…) 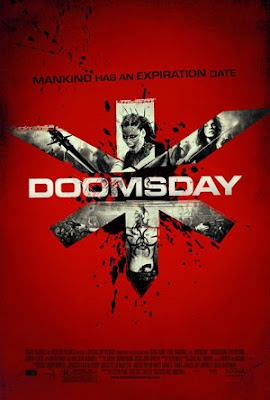 BTW, have you seen District B-13 yet? If not, do so. It's not great cinema, but it's plenty of French-ghetto-rappin'-parkur fun. (Yes, actually it DOES work!)