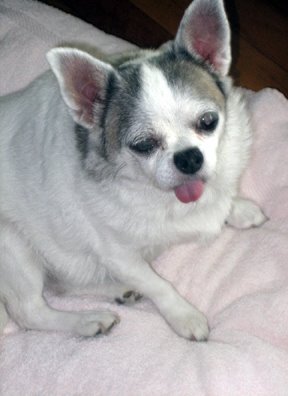 After months of consideration, my mother had her aged and quite infirm Chihuahua put down yesterday, and while the situation is heartbreaking it had to be done.

Over the past few years Mame (the dog) had all but completely fallen apart. Her teeth had mostly fallen out, her arthritic hind legs barely worked, she was massively incontinent and was just all-around miserable, so I began calling my mother's attention to the sad inevitability of euthanasia during my last few visits home. That option was a difficult one in the first place, but it was especially hard for my mom because the little hell-beast had been her only companion for nearly sixteen years. Rather than face being without her pet, mom kept shoveling money into endless expensive veterinary bills in an effort to alleviate the dog's myriad infirmities and delay Mame's demise, but lately the simple facts of the matter could no longer be ignored and my mom reluctantly opted to have the tiny terror put to sleep.

I've held my mom's hand (over the phone) during the past couple of days, and I'm glad to say that she's holding up better than I expected. She left the poor pooch with the attending vet and got out of the vet's office as swiftly as possible, understandably unable to stay for even one more second. It's one thing to consider a pet as a part of the family, but the real test of how much you love your beast is whether you can have them put out of their misery should that need arise. My mother was certainly no stranger to pets, particularly dogs, but Mame was the first she had raised by herself, so the bond there was strong and my mother seriously wrestled with getting her head around doing the right thing for her companion. My mom has been through a hell of a lot during her seventy-five years, but this was one of the hardest things she's ever had to face and as a result she swears never to own another dog. It's just too hard, and having once had a dog who I loved more than anything — the late, lamented Sam, but that's another post entirely — I completely understand her feelings.

Upon coming back from the vet's, mom removed all of Mame's toys (which she had been too infirm to enjoy), blankets, bowls, and any other reminders of her day-to-day residence, but there will be a period of adjustment. My mom told me that she has to get used to no longer saying, "I'll be right back, Mame" when she goes out of the house, and has caught herself just as she walks through the front door and stares wistfully at where her pet's favorite pillow sat for over a decade. And now her house is silent, its walls no longer echoing with the frequent yapping of her fiesty friend, and though I was not exactly a fan of the beast I do mourn her passing and my heart goes out to my mother. She's a tough old broad and I know she'll be okay, but it's impossible not to sympathize.

I'm sorry about Mame. You're a good son to give your mom the support she needs.

Always sad to hear about this. This weekend marks one year since we had to put down our own little hell-beast. He had surgery (warning: Frankenkitty pix), several rounds of chemotherapy... and eventually it was clear that there was no hope. (His first round of chemo bought him about a month of respite; his last got him about one day.)

After we got Fenrir's ashes back, we took him to our favorite bar. "No pets", my ass! At least the beer made writing the eulogy a little easier.

As someone who had to make the exact same decision a few years ago, I can totally sympathize. Our pets are not posessions, they are family members. As such, saying goodbye leaves an unfillable void in our hearts. My love and good wishes to your Mom at this difficult time.