IN ANTICIPATION OF THE DARK KNIGHT

So THE DARK KNIGHT is selling out shows across the nation well in advance of its Friday opening, a phenomenon I'm sure is spurred by the general public's curiosity over the film featuring Heath Ledger's final performance, playing what all accounts claim to be the definitive version of the Batman's arch-foe, the Joker. I thought Jack Nicholson's incredibly overrated turn as the Clown Prince of Crime sucked and once again amounted to him basically playing a caricature of himself, albeit in kabuki makeup, so I welcome a Joker that's actually scary.

As I've stated in a previous post from a couple of years back, the image of the Joker was (*ahem*) borrowed from the 1928 film classic THE MAN WHO LAUGHS, starring Conrad Veidt, and I have to say that just this still of Veidt is far more menacing and creepy than any version of the Joker yet to hit the screen: 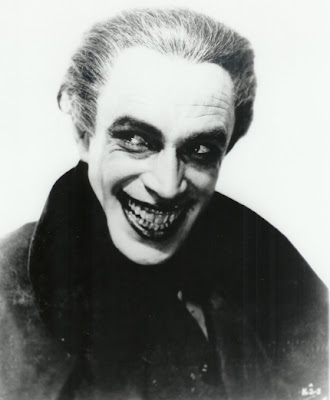 I'm admittedly anxious to see the new film, mostly to see what is done with the Joker rather than giving a toss about what's up with Batman this time around because with him you pretty much know what to expect. That, and whatever is done with the Joker can only be a step up from the blasphemous treatment given to my all-time favorite Batman villain, Rā's al Ghūl, in the previous installment. I didn't care for BATMAN BEGINS for a number of reasons, but chief among them was taking the name of Rā's al Ghūl and nothing else of the character, and then reinventing him as a generic master assassin/terrorist who was also one of the Batman's mentors. Bullshit! Horse hockey says I, and if this new film pulls any such move — which I don't think will be the case — I will swear off the Batman franchise forever. If you ask me, all of the live-action Batman flicks have sucked to varying degrees (including the one with Adam West) and the only good Batman movie is the 1993 animated feature BATMAN: MASK OF THE PHANTASM, so I'm going into THE DARK KNIGHT with few or no expectations.

Hell, if I had my way we'd be seeing an adaptation of "The Joker's Comedy of Errors" (BATMAN #66, Aug./Sept. 1951), only with the dick references multiplied a thousandfold and culminating in Batman nearly being subdued by the Joker's sinister boner. 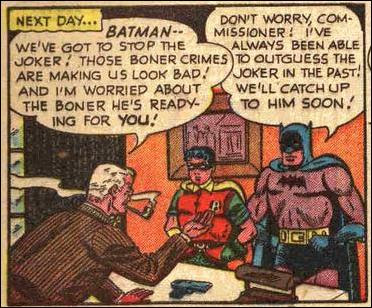 I guess there's a reason why I'm not allowed behind the camera...
Posted by Bunche (pop culture ronin) at Wednesday, July 16, 2008

I've heard nothing but positive things about The Dark Knight, so I have more hope than I did a month ago. I'll see it in a few weeks after the hype has eased.