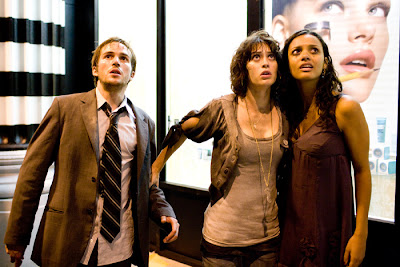 You know and I know that the internet is the place to find pictures of just about anything you’d want to see. A raccoon in assless leather chaps having a fistfight with a pregnant Asian Elvis impersonator? No problem. Dubya getting cornholed at Corey Clark’s Dude Ranch by Batman and Jesus? Absolutely. Michael Jackson pouring frothy champagne over the straining titties of some big-bootied ‘ho? It’s out there somewhere.

But good luck finding an actual photo of the CLOVERFIELD monster, a critter that my fellow student of all monsters gigantic, Mark G., assures me has acquired the nickname “Clover.”

The internet is a monster-lover’s paradise, allowing swift access to info and images of fascinating and beloved city-destroying behemoths, and even their more modestly-scaled brethren, but images of “Clover” simply aren’t there. I’ve managed to find a shot of the infamous giant rapist space-inchworm from GALAXY OF TERROR, as well as a Toho publicity still of what looks like Godzilla playing “anal intruder” with the lovely Kumi Mizuno, so why no Clover? I can’t even find a screen capture from a bootleg video for fuck’s sake, and that’s frustrating because you don’t get a very good look at it during its all-too-brief time on camera.

Then this morning I got an alert from Mark G. directing me to shots of the Clover toy — coming from Hasbro in October, featuring over seventy points of articulation, a selection of heads and parasites, plus a Statue of Liberty head, all for a list price of $99 (!!!) — and they match with what little is seen in CLOVERFIELD. Seriously, unlike images that have been posted for the past couple of months claiming to be of the Cloverfield monster, I personally assure you that the images posted here are what the damned thing looks like: 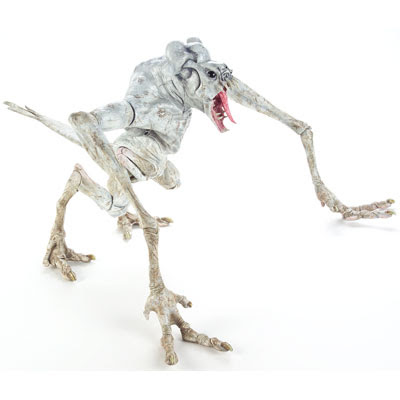 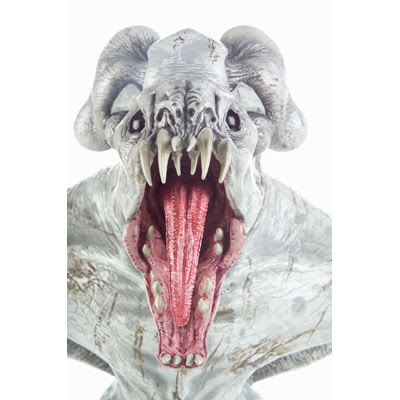 Yep, this is Clover, and these shots are a hell of a lot more clear than what you see in the film.

Oddly-articulated, pasty, and scrawny, combination that would totally sink this beast if not for its titanic size and accompanying destructive potential. And having finally gotten a good look at at, plus reading some notes on what the designer intended it to be, namely a confused juvenile of whatever species it is, I'm betting the sequel may try to pull a GORGO. If you've seen that movie, you know what I mean. If you haven't seen GORGO (1961), I highly recommend it; it's a British-made take on the Godzilla thing, and is also one of the ten best giant monster flicks ever made. No easy feat since the genre is almost completely dominated by Japanese entries. 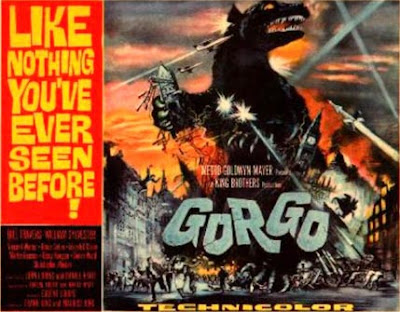 You and your kids really need to check this out.

And while I still say Godzilla would make short work of Clover, considering what I now know about it I guess I should cut it some slack since it's a scared, confused (and hungry) baby. Plus it doesn't shoot lasers from its eyes, fire throwing stars from its temples, or fart thick toxic clouds like some of its cinematic predecessors, so all it can really do is knock down buildings and touristy landmarks, along with munching on obnoxious lower Manhattan yuppie vermin, which is admittedly pretty cool. But I still find the design to be rather lackluster.
Posted by Bunche (pop culture ronin) at Saturday, February 16, 2008

clover looks like an anorexic version of orga from godzilla 2000. and i agree 100%....once i heard clover was a baby, i immediately thought of gorgo.

That things looks like a douchebag. Jet Jaguar could kick his ass!

It reminds me of a weird mutated rat thing.