A BLAST FROM THE DISTANT CARTOON PAST

One of the many blessings of YouTube is that you can put in even the most cursory of searches and you're likely to find stuff you haven't seen in ages. Recently, very dim memories of a cartoon I remembered as "Johnny Cypher" popped into my head, spurred by hearing a snippet of music that reminded me of its theme song. I had not seen that show since I was maybe five years old, so this was going back by four decades, but I checked YouTube and there it was. Seeing it again was verification of half-remembered early superhero cartoons and I have no idea where whoever posted this stuff got it from. Here's the theme song (NOTE: you know you're in trouble when a cartoon theme song is sung by kids, so beware):


That insidious theme tune stuck in my brain like a railroad spike for decades, as well as the hero's unusual method of flight; it was not until 1974 that I read about the Red Tornado, and I remember glimpses of a flying Johnny Cypher popping into my head when I read about him in the pages of JUSTICE LEAGUE OF AMERICA.

Of interest to old school cartoon geeks is the fact that this show was from Joe Oriolo, the same guy who gave the world THE MIGHTY HERCULES, a not-very-fondly-remembered early-1960's cartoon that described the "softness in his eyes" and "iron in his thighs" of the legendary Greek hero (who for some reason was rendered to look like the '50's-era Elvis gene-spliced with the Max Fleischer Superman, only in an over-the-shoulder toga and ballet slippers) in its unforgettably fey theme tune (that was sung by Johnny Nash of later "I Can See Clearly" fame). 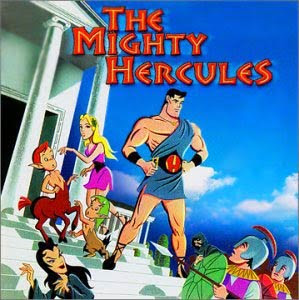 Also of note is that JOHNNY CYPHER IN DIMENSION ZERO's animation was apparently outsourced to the Japanese studio that earlier gave the world MARINE BOY (1966), which also has a wretched theme song and featured voice work by SPEED RACER's Corinne Orr. 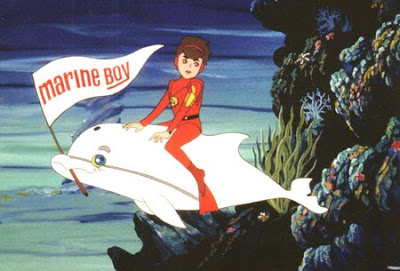 And for the record, MARINE BOY was a much better series than both THE MIGHTY HERCULES and JOHNNY CYPHER IN DIMENSION ZERO combined, and it should be put out on DVD immediately. Just sayin'.

Anyway, JOHNNY CYPHER IN DIMENSION ZERO's episodes and there were a staggering 130-138 (depending on which source you glean information from) six-minutes segments. Here's one of them:


Is there anyone else out there who has dim memories of this superhero artifact? Write in and share!
Posted by Bunche (pop culture ronin) at Saturday, August 21, 2010

I loved Hercules and Marine Boy, though I can't believe I don't remember Johnny Cypher at all. I'm still waiting for an authorized Herculoids DVD to be released.

This is why I love the internet. People thought I was making this cartoon up for years...even the people that watched them with me when we were kids. I love being able to prove I'm not crazy now to friends and family. Unfortunately, you have just made the Johnny Cypher song stick in my brain and it won't leave.

And I used to like the Hercules cartoon when I was a kid. Now? Not so much.

My local stations didn't air Johnny Cypher, but I spent my pre-teens at the beach, imagining I was Marine Boy, with my Oxy-Gum, breathing underwater. All I recall about Mighty Hercules was the catchy theme song.