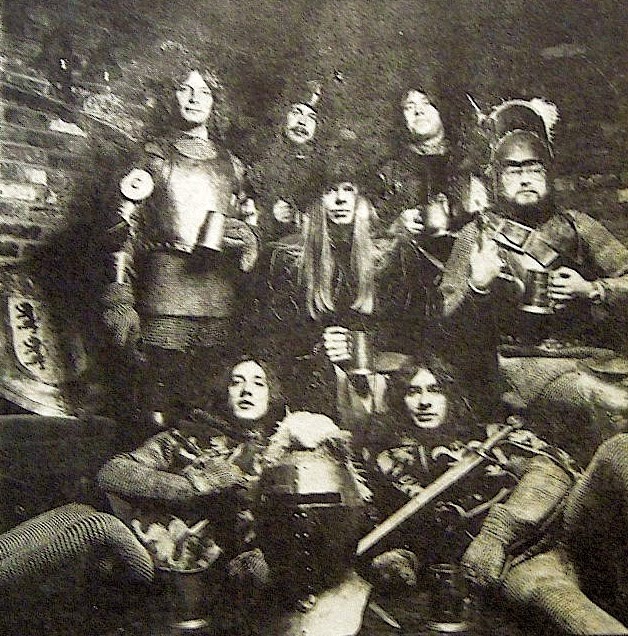 Grownup awareness and hindsight sure can be a bitch...

A friend recently hooked me up with forty-two episodes from the Mike Nelson years of MYSTERY SCIENCE THEATER 3000, and as I make my way through them I occasionally encounter one that I missed during the original run. Such an episode is the one where Mike and the Bots took on THE AMAZING TRANSPARENT MAN — a film I cannot believe was made by the same guy who directed THE BLACK CAT (1934) — and during one of the skit segments Mike does an impersonation of former Yes keyboardist Rick Wakeman during his "The Six Wives of Henry VIII" solo period, complete with ludicrous cape and a fright wig to simulate the musician's signature tresses. 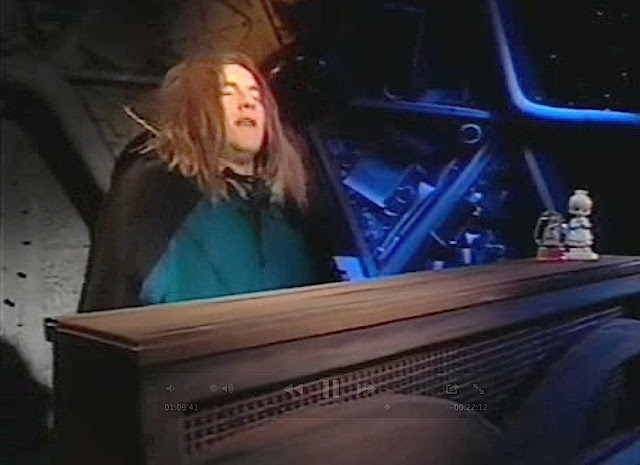 That bit kicked me in the head as, for the first time in nearly twenty years, my thoughts turned to the Rick Wakeman album "The Myths and Legends of King Arthur and the Knights of the Round Table" (1975). 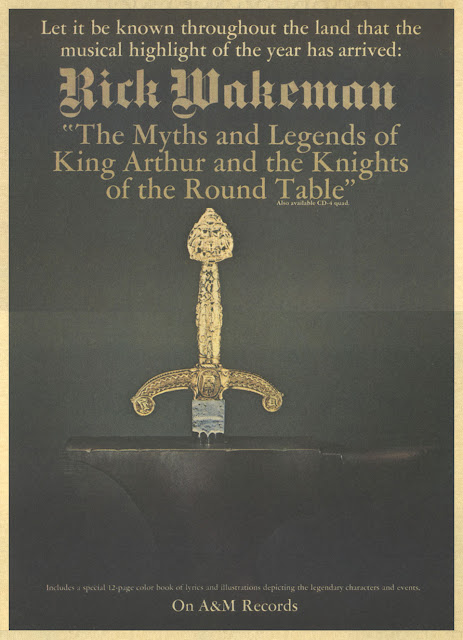 Even the promo ad was overblown and pretentious.

For those who've never heard of it, "The Myths and Legends of King Arthur and the Knights of the Round Table" is Wakeman's musical evocation of exactly what its title states, and it's an ambitious bit of heavily-orchestral composition accented by Wakeman's talented keyboard fiddling. Fraught with choral vocals that sound like two-thousand singers were in the studio and minimally-worded retellings of some key aspects of the Arthurian legends — the lyrical scarcity theoretically allowing the music to fill in the narrative and descriptive gaps — the album can be seen by some as an ideal soundtrack to a lengthy D&D campaign (which would not be inappropriate since Dungeons and Dragons first appeared scarcely a year before Wakeman's foray into Camelot, and both efforts simply reek of that early 1970's fantasy vibe). Lancelot, Galahad, Excalibur, the Lady of the Lake, Guinevere, Merlin, and of course Arthur are all present and represented with the kind of legendary aural bombast that would have made Basil Poledouris turn green with envy.

God help me, I used to love that record during my mid-adolescence, appealing as it did to my "romantic" side, but now I look back on it and ask myself what the fuck I was thinking. While there're some admittedly interesting moments to it, "The Myths and Legends of King Arthur and the Knights of the Round Table" has got to be one of the most overblown and pretentious pieces musical masturbation ever recorded, very clearly the product of a twenty-five-year-old with delusions of grandeur (plus, it was written during Wakeman's recovery from three minor heart attacks at that young age, so that may factor into it). Particularly embarrassing are the bits where the lush orchestral compositions abruptly derail into teeth-grinding examples of rinky-dink "pee-anny," most notably during the track devoted to Merlin. It's largely the same thing Wakeman was shooting for with the soundtrack to Ken Russell's LISZTOMANIA (1975), only everything worked much better there and had Roger Daltrey along for the ride. But what really pushes this whole exercise over the top is the fact that it was supported by a live show of "King Arthur on Ice" — no, I am not making that up — that not unpredictably lost Wakeman money, leading to inaccurate reports of the composer going bankrupt as a result.

An example from "King Arthur on Ice."

Now that I've listened to the "Arthur" album again for the first time since perhaps 1990 or 1991, I cannot believe that I used to lay there in my room in Westport at the age of sixteen (a good three years before I ever smoked weed), caught up in its dreamy evocation of Malloryesque pageantry and actually buying what Wakeman was selling. As anyone who knew me at the time can attest, I was far from shy about sharing the music I loved with all and sundry (often much to their great annoyance), but "The Myths and Legends of King Arthur and the Knights of the Round Table" was never spun for my friends, which leads me to conclude that on some level I knew it was a load of bullshit and realized I would be soundly and deservedly ridiculed for being a fan. I feel like a complete twat and wish I could go back in time and kick myself right up the arse (as FATHER TED creators and writers Graham Linehan and Arthur Mathews once so eloquently put it) for ever being such a complete and utter pussy. It's hard to convey what this album's really all about to anyone who has not heard it and I won't even try to give the album a proper review because everything I could possibly say about it, and more, can be found in the review posted here.

So, what's your equivalent to "The Myths and Legends of King Arthur and the Knights of the Round Table" as the once-beloved album that now makes you want to wear a bag over your head out of sheer embarrassment? Please write in and share your shame.
Posted by Bunche (pop culture ronin) at Friday, August 27, 2010

The first album my dad let me buy. Supertramp 'Breakfast in America'. I really wanted the Kiss Destroyer (or Love Gun) RIGHT next to it on the rack, but my uber-opera father would have NONE of that. So I knew 'take the Long way home' from my friends house...so I got it.

Both a fond memory and an awful album with one or 2 good hooks.

I know how you feel man, and sure we all have things to be embarrassed about, but I sort have come out the other side of being pissed at my younger self. I think you should cut that young dude some slack. Here's why -

After a lot of thinking about why I liked things that were so corny, I figured out a few things. First, being a pre-teen and just developing interests and tastes, I was drawn to bigger or flashier or more accessible types of things. Ideals. I was so enamored with the idea of the middle ages and knights and shit that I literally begged the universe to send me back in time to I could be in that "enchanted" place. Jesus. After learning about how life really was in those times I quickly recanted.

Second, I figured out that probably I simply wasn't ready for all the more edgy, serious types of things I would come to love in the future. The darker stuff that scared me. We were still young kids fer cryin out loud! It's okay for kids to like corny stuff. I didn't gravitate away from pop music to hard rock until I was 12 or 13.

Also, I hate to enact this cliche, but the 70s were a simpler time. No MTV, no internet, and a less jaded youth culture all made it easier to be into kitsch.

So don't hate on young Stevie too much. He turned out okay.

PS: I'm still embarrassed that when it came out, REO Speedwagon's "I Can't Fight This Feeling" was my absolute favorite song.

Jason, you have company, there. I'll see your love of "I Can't Fight This Feeling," and up you the fact that I would get all teary every time I saw the video, which was so corny that the guys in the BAND made fun of it in interviews.

I also loved "Air Supply," and I would rock out to them in my early teen bedroom, the contents of which consisted almost entirely of soft-sculpture unicorns and shit with rainbows on it.
I owned every album Styx had out at the time.
I believe this made my room, in those years, literally the gayest lair on the planet.

I feel somewhat redeemed by the fact that my first album was Kansas's "Point of No Return," but even that was because I was enchanted by the cover art.

In HIgh School I thought that Billy Squier's "Rock Me Tonight" video was the coolest thing ever. I hadn't bothered to reconsider that position until I heard Stern and Artie talking about how that video singlehandedly destroyed Squier's career, so I went and YouTubed it. Watching it made me think back to every jock in school who ever threatened to beat me up, and how I wish they'd had more follow-through.

Styx, Kilroy Was Here: not only is the album just not very good, I jumped through about seventy mental hoops telling myself it was great.

The Brady Bunch Album and made me promise not to tell my dear old daddy about it.

I actually listened to thing quite often for the next couple of years.

Sad if you think about, especially when it was bought for me, it was current and up to date for the music of the day.

Best of Bread. I got it in 10th grade because my high-school crush sang a cover of "Mother Freedom," and somehow the sappy-beyond-reckoning tunes wormed their way into the counter-earth brainspace balancing out my intense teen love of Black Sabbath, Iron Maiden, The Plasmatics and Judas Priest. Sure, I liked Jethro Tull and Fleetwood Mac during that time, too... but Tull and Mac rocked like demons compared to *gag* Bread. I even used to tear up when listening to "If" or "Everything I Own." Jesus, what the FUCK was I thinking? Teenage hormones are funny things...

Book of Love's Lullaby. I was trying WAY too fucking hard to be perceived as worthy of entrance into the vaginas of the girls of 88-90 high school. I got to college and found a record store that actually bought your shit CD's. Sold, with a smattering of a few others.

BUT in retrospect, I wish I still had them all. Kind of a Red Badge of Dickheadedness to show surviving the combat theater of Terrible Tunes.