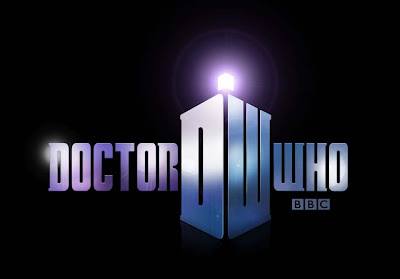 And we're back, with more of the rundown on Matt Smith's first series as the Doctor!

Series Five-Episode 6: The Vampires of Venice 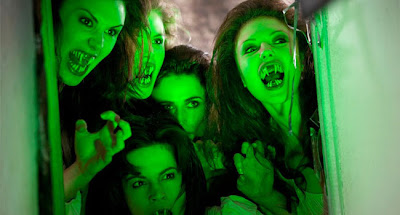 The Doctor's intention to take Amy and Rory on a romantic holiday gets derailed as the trio must deal with a pack of suckfaces in the Venice of 1580. Good for what it is, this is a somewhat lesser entry for this year's-worth of DOCTOR WHO and I wish the vampires could have been straight-up evil undead from out of Earth legend rather than aliens (in this case the fishlike Saturnynians), but the trope of monsters pretty much always turning out to have a scientific/sci-fi explanation has been part of this show's fabric almost since its inception back in 1963, so I guess I'm shit outta luck. Oh, and this episode also showcases the love triangle involving the Doctor, Amy (who very blatantly threw herself sexually at the Doctor in a previous episode) and the hapless Rory, a situation that evolves in interesting ways in subsequent episodes. 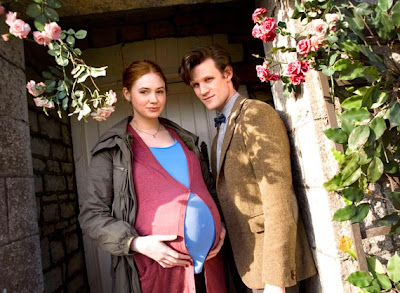 Five years after the events with the vampires, Amy and Rory are happily married and awaiting the birth of their first child. But this is DOCTOR WHO, so there's no way things can be as they seem... Sorry, but I can't say anymore about this one without giving it all away, but I must mention that I love the insanely enormous pregnancy prosthetic that Karen Gillan sports throughout. 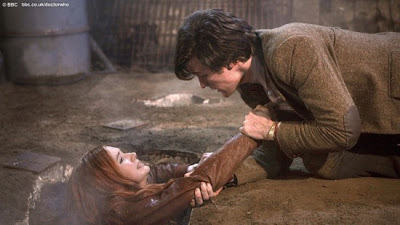 In a Welsh village in 2020, a drilling operation catches the attention of a previously unseen branch of the Doctor's old foes, the Silurians, a race of reptile-men who have hibernated for ages and now seek to wipe the human infestation off the face of an Earth that they see as rightfully theirs. Tensions swiftly reach the boiling point as some of the locals, along with Amy, find themselves in the clutches of the Silurians with vivisection slated for their immediate future. One of the Silurians, a ruthless warrior named Alaya, is likewise in the hands of some surface-dwellers and the Doctor, who seeks to negotiate peace, but how can this impasse be settled without great cost to both sides? 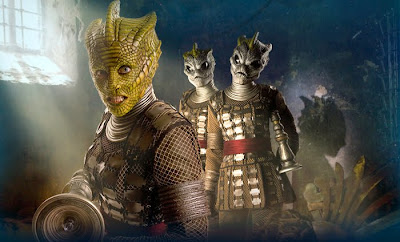 In this very satisfactory conclusion, the situation gets resolved in ways that are both deeply saddening and thought-provoking, particularly in how a child character will perceive his mother after this tale's events. More than any other story in this run, this two-parter feels a lot like an old school DOCTOR WHO story, particularly one from the Jon Pertwee era, and to me there's little better. That said, this story makes me long to have the Ice Warriors brought back, and I know I'm not alone in that wish.

Series Five-Episode 10: Vincent and the Doctor 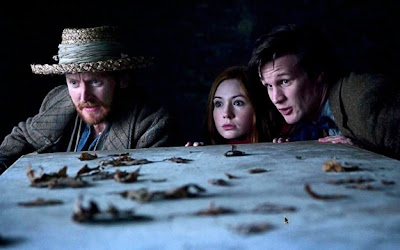 NOTE: this is the only story in this run that does not in some way reference the tear in time/space.

Upon discovering something strange in a painting by Vincent Van Gogh while checking out a gallery exhibition of the artist's work, the Doctor and Amy jaunt back to 1890 to investigate. Meeting Van Gogh proves to be a thrill for both of our time-traveling heroes (they're huge fans), and it's soon made clear that the artist's mental instability allows him to see a large monster that has been horribly killing off innocent locals.

Written by Richard Curtis, the co-writer of all the best episodes of BLACKADDER, this episode is a celebration of Van Gogh's work as contrasted against his tragic madness, and I have to admit that upon my first viewing I did not care for it. However, upon further consideration (and how this story very importantly figures into later episodes) I recant my initial misgivings, though I did find the monster to be kind of beside the point and wish instead that the story could have simply focused on the Doctor's time spent with the tortured artist. Yeah, I know there would have been hardcore DOCTOR WHO fans who would have bitched and moaned if there should even be one episode without some kind of alien or monster as a threat, but I find such flights of scary fancy to pale in comparison before the all-too-real horror of gradually losing control of one's faculties, an aspect that lends this story a great sense of poignancy in the face of the inevitable. Of particular note is the episode's coda, which at first struck me as incredibly cruel, but now makes great sense in a way that will make all art-lovers in the audience bawl like children. Myself included. 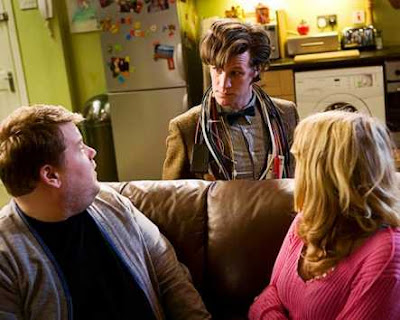 A strange anomaly traps the TARDIS and Amy in a materialization loop while stranding the Doctor in present day England, where he moves in as a lodger at the house from whence the unknown force emanates and lures unsuspecting people off the streets to their deaths. Sharing a flat with corpulent Craig Owens (James Corden), a sweet sort who is madly in love with his friend, Sophie (Daisy Haggard), the Doctor sets to work at sorting out whatever is messing with the TARDIS while also gently nudging Craig to express his feelings to Sophie, an act that would shake him from his cozy rut.

This is another story where I found the human interest of the narrative to be far more involving than its sci-fi elements, but I doubt that the average DOCTOR WHO viewer would have gone for a whole episode of the Doctor acting as matchmaker. Craig's shy and obvious affection for Sophie pulls at the heart-strings and the viewer will be compelled to see how this quiet little love story turns out, but to get to that denouement we have to go through the usual sci-fi motions, which in this case are quite beside the point. Then again, if the sci-fi element were not a part of it, there would have been no reason for the Doctor to fit logically into the narrative, so I guess I should just shut the hell up and be happy with it as it stands.

TO BE CONCLUDED
Posted by Bunche (pop culture ronin) at Thursday, August 19, 2010