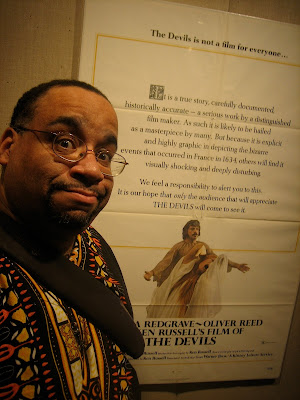 Yer Bunche, in front of an original one-sheet for Ken Russell's infamous THE DEVILS (1971).

I just got back from what can only be considered a perfect day (okay, the heat and humidity sucked, but you know what I mean) and I am in one hell of a good mood. I hit my favorite comics shop — where I saw that the issue of FAMOUS MONSTERS OF FILMLAND containing my PREDATOR retrospective has come out; it's the July issue, so get yours today! — had dinner and drinks with the coolest woman I've been involved with since maybe ever (more on her as things develop), and then she and I took our buzzed asses over to Lincoln Center's Walter Reade Theater for a rare screening of director Ken Russell's balls-out insane masterpiece, LISZTOMANIA (1975) as part of a retrospective called "Russellmania."

My love of both Russell and LISZTOMANIA have been previously discussed, so I'll leave that out. Instead I would like to mention how cool it was to finally see the film projected after having seen it on VHS and a DVD-rom burned from the VHS (the film is not available on DVD in the U.S.) many times over the past twenty-five years, and also recently on the British Region 2 disc (get an all-regions player; you won't regret it!). Russell's "BIOGRAPHY on peyote" take on the life of classical composer Franz Liszt is a sumptuous visual madhouse that fairly explodes across the screen and the only way to truly appreciate its art direction and detail-crammed frames is to see it projected. Seriously, I could not have been happier to experience it all proper (as A CLOCKWORK ORANGE's Alex would no doubt say) and I was glad to be able to share the film with my new lady-friend, who had never seen it and came out of the movie with a look on her face like one would expect if she's been smacked in the head with a shovel. That's exactly how I felt when I first saw it back in 1985 while high and drunk out of my skull on bad ditch-weed and cheap white wine, and when I sobered up I watched it again and found that seen either sober or completely ripped to the tits, the effect was much the same. LISZTOMANIA is without question Ken Russell's most utterly bonkers major work — his most bonkers minor work would certainly be THE FALL OF THE LOUSE OF USHER — and one's enjoyment of its charms are contingent upon how much over-the-top shamelessly blatant "symbolism" the individual viewer can stomach, plus to say nothing of its heavy lashings of bad taste and offensiveness. That kind of stuff is right up my alley, so I guess my enjoyment of it was a given, but when I showed LISZTOMANIA to a group of friends in Westport over two decades ago, all of them practically turned on me and burned me at the stake in sheer outrage and dislike over the film, so keep that in mind before inflicting it on your pals.

When my lovely date and I entered the theater's lobby, I immediately spotted Ken Russell himself, seated on a chair and resting on his cane. My heart leaped into my mouth and I went over to him, speaking in a clam and quiet register so as not to disturb the frail post-stroke eighty-three-year-old auteur. I told him of my admiration for his work and the sheer elephant-balls he had for putting it onscreen, and he graciously allowed me to get a photo with him. 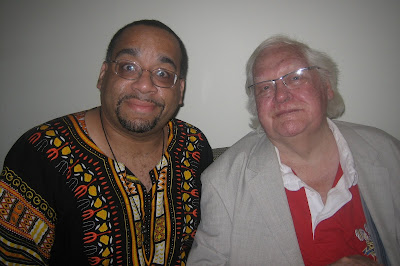 Fuck George Lucas: I got to meet Ken motherfucking Russell!!!

The audience seemed rather sedate during most of the film, but that's probably due to the fact that LISZTOMANIA is a film that only well-seasoned LISZTOMANIA fans were likely to venture forth to see on the big screen, and that theory was kind of proven during the after-movie Q&A session, in which the reverent audience asked mostly very intelligent questions that proved their familiarity with the material. My favorite moment was when the son of Holocaust survivors commended and thanked Russell for "having the balls" to depict the horrors of the rise of Nazism in his signature satirical fashion, a sentiment I share because I remember nearly shitting myself from the sheer shock of seeing the film's Frankenstein/Wagner/Hitler for the first time, and image I simply could not believe anyone could be mad enough to have come up with it.

No, you are not going insane: It's Frankenstein/Wagner/Hitler! (Double-click on it to see it large.)
I myself did not ask a question, but instead I told Mr. Russell how at the age of ten I dragged my bewildered parents to see TOMMY when it was released, an experience that made me a Russell fan for life, and I went on to thank him for making some of the most visually and intellectually challenging films ever made, a statement I made on behalf of all in attendance. That was met with a round of applause, and a very pleased Mr. Russell beamed as he offered his thanks to me. I felt like a kid who'd just been kissed by the cute girl next door, and my heart soared.
When the audience finally made its way out, I hang around and chatted with a couple of fellow film-minded friends who happened to also be there (including my old pal Scooter, who filmed the Q&A for posterity) and Mr. Russell was kind enough to autograph my copy of PHALLIC FRENZY, an excellent chronicle of the man's chequered career.

The simple fact of the matter is that Ken Russell is most likely not long for this world, and meeting him and getting to tell him to his face how much his films mean to me before he leaves us is one of the top moments of my life. Along with John Waters, Ken Russell is my favorite "filth elder" (as John Waters describes himself) and there will never be another like him.
Posted by Bunche (pop culture ronin) at Wednesday, August 04, 2010

I have to assume TOMMY made a small profit of some kind as that's the only explanation as to how LISZTOMANIA got financed since it obviously had a decent budget.

What brave studio honcho thought it had mainstream appeal? I applaud the man. :)

I always wondered if Russell used part of the budget for TOMMY on LISZTOMANIA. The two were shot back-to-back and released the same year.

You might want to check out Russell's DANCE OF THE SEVEN VEILS, up on YouTube... it's an early runthrough on what he did with LIZSTOMANIA, only with composer Richard Strauss.

Pissed off the Strauss estate so much, they got a legal injunction prohibiting the screening of the film until close to 2020.

It's awesome that you got to meet him. I never did... And now sadly never will.