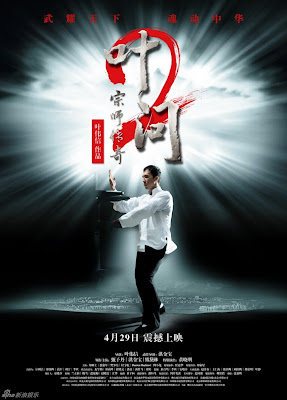 The fictionalized chronicle of the life and career of the guy who set Bruce Lee upon the path of badassery continues with mixed results, but this film is better than the garden variety sequel and yields several very impressive fight sequences. And when we get right down to it, that's what we're here for, soapish melodrama be damned!

Having relocated to Hong Kong from Foshan after WWII, Wing Chun master Ip Man (Donnie Yen) struggles to make enough money to support his family and pay the rent. His wife is expecting a second child, his son needs money to pay for his schooling and Ip can't get any students for his newly-opened Wing Chun school, so the narrative is pretty much one of those Chinese melodramas in which the audience is meant to draw inspiration from the put-upon, "perfect" protagonist and endure along with him as he moves from one treacly soap opera trope to another. Luckily, before things get boring/sappy,Ip's skills are tested by a young punk (Xiaoming Huang) and his pals, and so impressed are they by the ass-kicking they receive, they become his students on the spot and spread the word about the master's excellence. Unfortunately for Ip and his students (but fortunately for the viewing audience), the school catches the attention of the local kung fu community and Ip's top student runs afoul of some students of Master Hung (my boy Sammo Hung), a fierce proponent of Hung Gar kung fu (that the "five animals" style, for the layman). 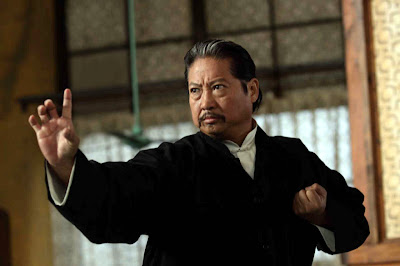 My boy Sammo Hung as Master Hung, restoring glory to modern kung fu cinema.
The set-to between Ip's student and Hung's boys — which degenerates into a totally unfair three-on-one beatdown that Master Hung's boys lie about — swiftly escalates into a war between schools (which Ip does not condone) and Ip is made aware of the corrupt local "old masters" system, in which he would first have to defeat all masters who challenge him before being granted the right to teach, after which he would also have to pay a fee to keep practicing. After vanquishing two of the elder masters,Ip must face Hung, and what results is the highlight of the film, a fight that proves Sammo's still got it in no uncertain terms. Good lord, the hands in that fight... 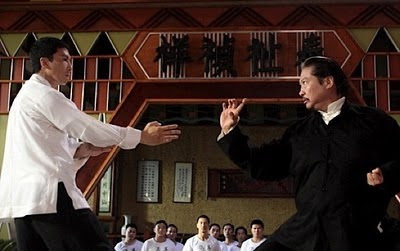 Duel of the masters: Ip versus Hung.

Once that fight is settled (an impressive and quite serious draw), Ip is allowed to teach but he immediately states that he will not pay any fees for that right, thus instigating more shit between his and Hung's schools. That shit eventually sorts itself out in the name of Chinese solidarity, which is a good thing because the British assholes have gotten so out of control that they need a serious Chinese foot shoved straight up their collective ass. One of the local occupying police is particularly heinous, treating the local Chinese like less than dogshit while extorting money from the area's martial arts masters (the fee that sifu Ip called "bullshit" upon), and in his cadre of scum is a western-style boxer (Darren Shahlavi) who does some seeeeeeeeriously vile shit during an exhibition match pitting western boxing against Chinese boxing (aka good old wholesome kung fu) that requires Ip Man to step into the ring and bring the hurt after a film's worth of misery and abuse. 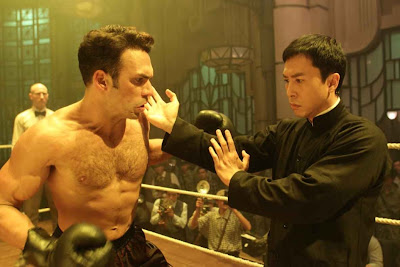 Sifu Ip versus a British piece of ambulatory feces (Darren Shahlavi).
Now, from what I've heard, this flick was supposed to skip straight to when sifu Ip began training a young Bruce Lee, but apparently there were difficulties with securing the right to do so from Lee's estate. Instead, we get what is pretty much an average kung fu flick with some admittedly good fights and as such it's worth sitting through, but the Lee angle would have been awesome to see. Instead of straight-up Brucage, we get an obviously tacked-on ending where a perhaps-twelve-year-old Bruce shows up and demands to be Ip's student, only to be politely advised to come back when he's older. The kid playing Bruce looks the part and rocks Lee's signature cockiness and gestures to a degree that is both accurate and snigger-inducing, and I hope that if there's another Ip man flick it will deal with the master's tutoring of Lee Siu Lung. 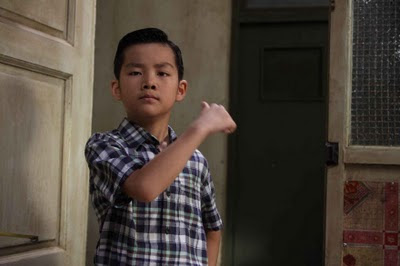 The wee Bruce Lee demands to learn from the best and gets rejected...for now.
The only real difference between this film and the first one is that this time the villains are some vile British assholes instead of some vile Japanese assholes, and each and every one of the actors they got to play the nasty white guys gives an over the top and awful performance that borders on the unintentionally comedic, especially Charles Mayer as the corrupt colonial officer. But, fuck it. If you've bothered to read this, then you're already a martial arts movie goon and will put up with the film's soap opera/weepy aspects in order to see the ass-whuppin', and what's on display here is definitely work your time. Not great, but worth a Netflix rental.
Posted by Bunche (pop culture ronin) at Monday, August 16, 2010

Donnie Yen is my hero