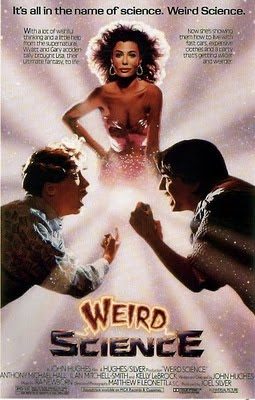 The spectre of the late John Hughes looms large over American cinema of the 1980's, with the writer/director often cited as "the voice of a generation." Personally, I never bought into that assessment of the guy's work because his films about the teenage condition were really no different than similar fare that came in previous generations, with the sole difference being that Hughes' films were fortunate enough to happen at a time when Hollywood movies could be more honest about youthful sexual longings, insecurities and the distinctly post-1970's suburban partying excess that defined much of the MTV decade (or at least that defined the goings-on when and where I grew up). I'll also grant that Hughes' strong suit was that not one of his protagonists was what would usually pass for the idealized "glamorous" teenager (with the possible exception of Molly Ringwald in THE BREAKFAST CLUB), instead populating several of his stories with dorks and losers of both genders, something that insecure kids could easily identify with. While the majority of Hughes' teen flicks were, I believe, aimed at girls, WEIRD SCIENCE was a straight-up adolescent male fantasy writ large, and as such it's my favorite Hughes movie and one of my favorite films from its era.

In case you somehow missed it, WEIRD SCIENCE follows Wyatt Donnelly (Ilan Mitchell-Smith) and Gary Wallace (Anthony Michael Hall), two nerdy high school losers who are the butt of constant abuse from bullies (including a young and embarrassingly new wave-looking Robert Downey, Jr.), Wyatt's meathead asshole of an older brother, Chet (Bill Paxton, in perhaps his most definitive role this side of Hudson in ALIENS), and can't get the time of day from any living female. When Wyatt's parents leave for the weekend, Gary offhandedly suggests that the pair use Wyatt's computer to simulate the ideal woman, feeding the computer with every bit of data that could facilitate the fantasy. What they did not expect was the program and a half-assed voodoo ritual actually working and coming up with Lisa (former fashion model Kelly LeBrock), a total knockout redhead with amazing, godlike superpowers. 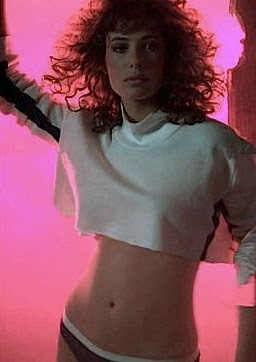 The arrival of Lisa (Kelly LeBrock): the '80's answer to Botticelli's "The Birth of Venus."

Sweet, British-accented, funny, genius-level smart, smokin'-hot and completely willing to acquiesce to her creators' sexual whims, Lisa is a literal genie let out of the bottle, and the rest of the movie chronicles her successful efforts to make confident men out of a pair of pathetic losers who hadn't seen a trace of pussy since they slid out of their mothers'. It's a noble and utterly selfless quest that's fueled by the movie throwing all logic and realism out the window and embracing the sensibility of what is essentially a live-action cartoon, an aspect cited by many viewers as what makes this their least favorite of Hughes' "big three" (the other two being THE BREAKFAST CLUB and the achingly funny SIXTEEN CANDLES).

In my humble opinion, it's that very cartoonishness that makes WEIRD SCIENCE a gem, and some of its elements would be right at home in a comic book or a particularly good issue of MAD. It's also a strong contender for the title of "Best Male Fantasy Movie Ever Made" and some of its qualifying characteristics include the following: 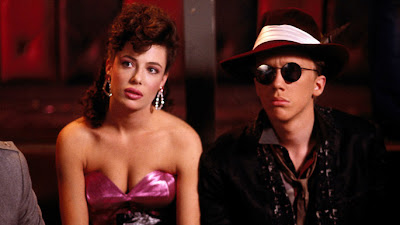 That sequence fucking kills me and is so over-the-top offensive that it does a complete one-eighty, becoming a satire of its own outrageousness. It's a classic moment and reads just like the twisted John Hughes I first encountered years earlier during his days as a writer for NATIONAL LAMPOON, a Hughes whose incredibly filthy and mean-spirited bent was considerably sanitized for Hollywood deployment. 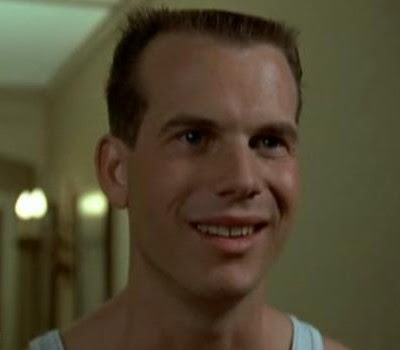 Behold the testosterone-fueled majesty that is Chet (Bill Paxton).


Infinitely worse than the pussified new wave bullies Max (Robert Rusler) and Ian (Robert Downey, Jr.), Chet is a shotgun-toting, jarheaded douchebag of the highest order and he's that rare bad guy that you just love to hate. 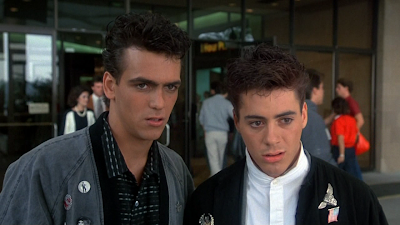 But the real point of these limp bullies is to illustrate what Wyatt and Gary would be like if they were themselves assholes. Max and Ian are the dark reflection of our dorky heroes, only a tad more posh and romantically connected to the girls Wyatt and Gary like, girls the bullies would ditch in a heartbeat for a shot at Lisa. Perhaps my only complaint about this film is that Wyatt and Gary did not get in at least one shot to the kisser on these pricks. Chet would kick their asses if they attempted it with him, but these escapees from A Flock of Seagulls? I'd call it a fair slap-fight.

And on top of all that, the boys get to drive fast and fancy cars, throw a kickass house party, rout a gaggle of post-apocalyptic biker mutants — including Michael Berryman, the black punker chick from REPO MAN and Vernon Wells, pretty much reprising his role as Wez from THE ROAD WARRIOR — get the girls of their dreams (dull though they may be) and, last but definitely not least, get to see Lisa naked (which we don't, unfortunately).

Re-examining WEIRD SCIENCE after so long was like a welcome trip back to some of the favorite parts of my very much misspent youth with an old friend I had not seen in a very long time, and I gotta tell ya that it felt quite good. Do yourself the favor and check it out, either for the first time, or for the hundredth.
Posted by Bunche (pop culture ronin) at Saturday, August 28, 2010

Great review. I agree with everything you said. But now I'm dying to watch this movie for the first time in years and I don't have a copy. Fuck you!

Absolutely one of the best... your post is quite timely as this was shown on TV down here on Thursday night (a rarity). Michael Berryman became one of my all time favorite actors with his post-mutant party plea ,"Let's not get this out. I'm a high school English teacher".

One correction... Chet is Wyatt's brother, not Gary's.

That last pic above of the two bullies (One of them the baby-faced future Iron Man) has them standing in front of the rear upper entrance of Northbrook Court in Northbrook Illinois. I remember when they filmed that day..It was summer and I rode my bike up to the mall and I saw all these movie trailers and gear parked in the parking lot...word was they shut down part of the mall for filming. Little did I know that it would go on to be a huge 80's movie. It's alive!

such a cool movie that puts ya in a feel great mood. I have seven copies of this movie. that's how much I enjoy it.