Time for more autographed photos, so away we go!

Just before my birthday, Lincoln Center ran a festival of Asian cinema and one of my heroes, the baddest-assed fat due ever, the mighty Sammo Hung, was scheduled to appear. Unfortunately, I couldn't be there, but my old friend and mentor Ric Meyers — one of the country's top experts on Asian cinema and martial arts movies — went to the show and got me Sammo's autograph on the show's program. 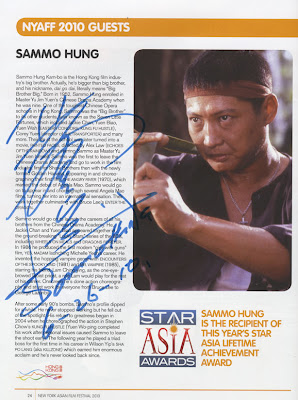 I wish I'd met him personally, but this is a good substitute. Thanks, Sifu!

Causing my collection of signatures from the Adam West BATMAN series to swell is this great shot of '60's pop sensation Lesley "It's My Party" Gore as Pussycat, Catwoman's protegee who seduced Robin and briefly turned him to the Dark Side. 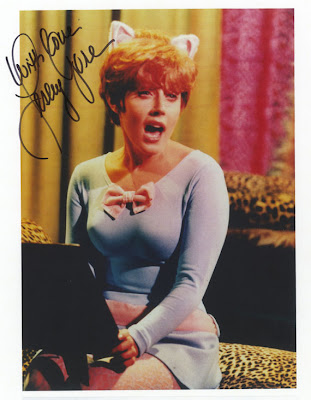 Later coming out of the closet (which lent her classic songs a whole new dimension) and covering AC/DC's "Dirty Deeds (Done Dirt Cheap)" — and no, I'm not kidding about that — I will always have a kind word for Lesley Gore.

She's been dead for a few years but considering my jungle girl fixation, how could I not want a signed shot of Irish McCalla? 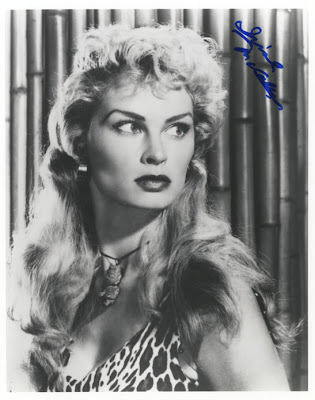 Yes, Sheena, Queen of the Jungle herself. A striking woman if ever I saw one, she reminds me of Jamie Pressly in a leopard skin (an idea I like quite a lot, thank you very much; c'mon, Jamie! Do it for Yer Bunche!).

Now we get to the George A. Romero section. If you have even the most cursory knowledge of horror films, you should who Romero is, but in case you don't, he's the director who forever revolutionized scary movies when he unleashed NIGHT OF THE LIVING DEAD (1968) upon an unsuspecting world, traumatizing a generation of kids in the process. I've read several accounts of how parents dropped off their little darlings at the local matinee for what they thought was just going to be another run-of-the-mill fright flick, and when they returned to pick up the kiddies, the wee ones were reduced to a state of crying, terrified shock. For that alone I will always have a warm spot for Romero and many of his films.

Romero's MARTIN (1978) was a quiet little film that examined the vampire legend from several intriguing angles, following its tortured titular character who was played by John Amplas, whose autograph is seen below. 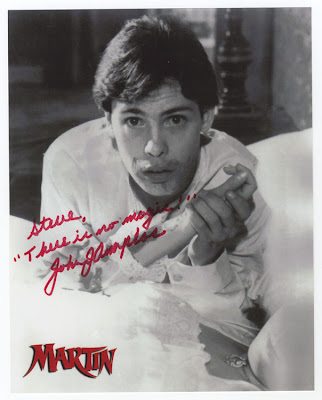 It's not for all tastes, but I very much recommend it if you haven't seen it. MARTIN is a bleak and melancholy work and it's the perfect antidote for all that TWILIGHT bullshit.

Without question, my favorite Romero film is 1979's apocalyptic DAWN OF THE DEAD, the first truly ultra-gory film I ever saw in the theater and one of my favorite films from any genre. It's character study of four people who take refuge from a worldwide zombie plague in a shopping mall and it's compelling, visceral stuff from start to finish. One of the keys to its landmark status is the performance of Ken Foree as Peter, a skilled S.W.A.T. team operative who was perhaps the most badassed black man seen onscreen in the '70's next to ENTER THE DRAGON's Jim Kelly. I don't think I have to tell you what it means to see one of your own onscreen possessed of dignity, intelligence and massive bravery, so Peter made a huge impression upon me that remains to this very day and meeting Ken Foree made me feel very glad in my heart. The dude was massive — I swear his and was as big as my head — and very nice, and I'm glad I got to thank him for bringing such an awesome black hero to the screen. 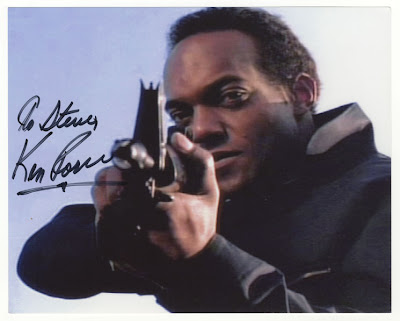 Also from DAWN OF THE DEAD was David Emge as the terrifically assholish (and all-too-human for it) Stephen, aka "Flyboy, and since I had the opportunity I figured I'd get his John Hancock for posterity. 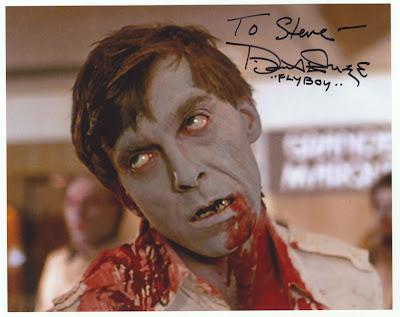 Then came George Romero himself, and the venerable cinematic helmsman could not possibly have been more of a sweetheart. 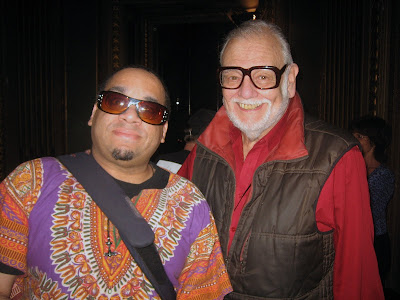 Yer Bunche and George A. Romero.

Needless to say, I had to have his autograph (seen below), and sooner or later I'm going to frame it and hang it from my wall. 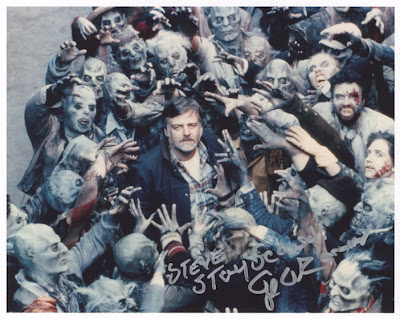 And since Romero, Emge and Foree were all in the same place at once, I figured I'd get all of their signatures on my favorite publicity shot from DAWN OF THE DEAD. 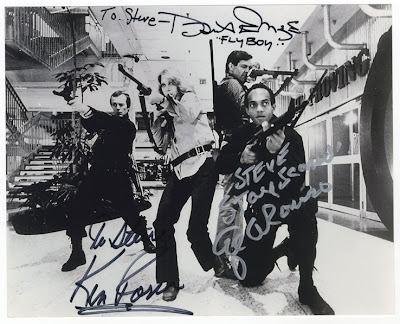 Someday I hope to get Scott H. Reiniger and Gaylen Ross to complete this monument to skin-crawling excellence...

Legendary makeup artist and specialist in shocking gore effects Tom Savini has long been the subject of horror fans' fascination, thanks to his groundbreaking and creative work as seen in MARTIN (1978), DAWN OF THE DEAD (1979), FRIDAY THE 13th and MANIAC (both 1980), THE BURNING (1981), CREEPSHOW (1982) and many others. Here's Savini as seen in Romero's KNIGHTRIDERS (1981)... 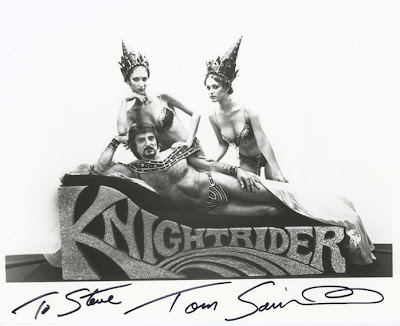 ..and his memorable guest voice appearance on THE SIMPSONS. 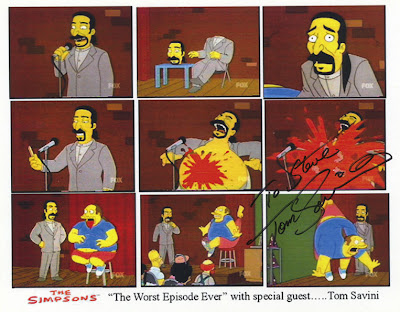 And last, but definitely not least, is this shot of William Smith, a gift from my pal Big Black Paul. 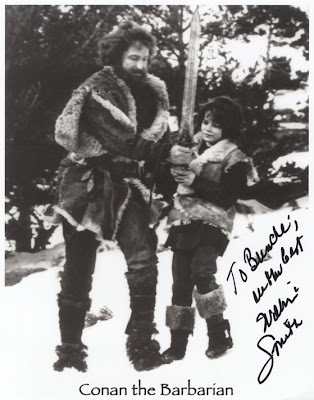 Smith is a legendary heavy from works such as DARKER THAN AMBER (1970), GRAVE OF THE VAMPIRE (1974), BOSS NIGGER (1975, though obviously not as the title character), and the unforgettable ratfuck bastard Falconetti in RICH MAN, POOR MAN (1976). But to me, Smith will always be Conan the Barbarian's dad (from the classic 1982 sword & sorcery epic), the man who forged an awesome sword and enlightened the young hero to the Riddle of Steel. Plainly and simply awesome.
Posted by Bunche (pop culture ronin) at Saturday, August 07, 2010