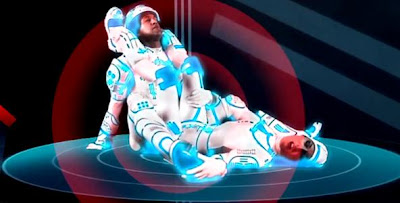 A pair of programs — the "penetrator program" and the "receptor program" — demonstrate "the Sitting Bull."

The instructional action in SCORE is played utterly straight and takes place on the TRON world's game grid, guiding the user through twenty sexual positions, and though it's done with a straight face, the concept is kind of amusing. (Well, I found it funny...) While the positions in question are accurately demonstrated, the participants never break from the whole TRON aesthetic and no genitalia is on view, which is to say that the imagery of glowing, helmeted characters fucking with their clothes on might not get you into trouble if you watch it anywhere not considered work-safe. There's no nudity but there's also no doubt whatsoever as to what's being represented, so proceed with caution.