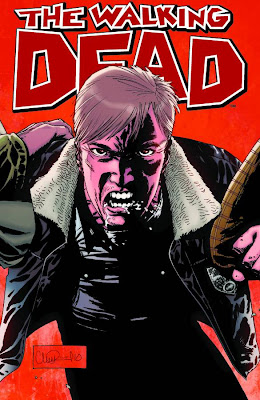 Cover of THE WALKING DEAD #75.

If you saw my previous post on the recent comics I've read, you'll recall that I maligned the ending of the latest issue of THE WALKING DEAD for what I felt was a trite and fucking stupid ending. I still won't spoil exactly why it aroused my ire, but my pal Jared of the Mountains clued me in on the fact that was a joke, the explanation of which can be found on the issue's letters page that I did not read. Read the issue and then look for the yellow highlighted note among the letters. All is explained and now that I know what was going on, I take back my earlier harsh assessment. The shit's funny.
Posted by Bunche (pop culture ronin) at Friday, August 06, 2010

I only read WALKING DEAD in trade paperback form, and the letters pages are not reprinted in the tpbs. Will I not get the joke?