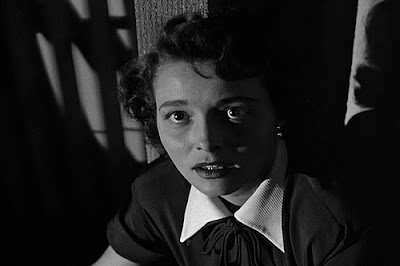 Patricia Neal as Helen Benson in the science-fiction classic THE DAY THE EARTH STOOD STILL (1951).

There are few science-fiction films that loom as large in my estimation as the sober and very serious THE DAY THE EARTH STOOD STILL (1951), the tale of the Earth's first contact with an advanced extra-terrestrial envoy who offers humanity a terrifying ultimatum and displays his vast power in a manner whose very very quietness only ups the potential horror. The thing most intrigues me about that film is not the admittedly awesome alien —Klaatu, unforgettably portrayed by Michael Rennie — but rather the all-too-human Helen Benson, an utterly ordinary single mom who unknowingly rents a room to the disguised spaceman. Serving as the everyman through whom the alien gets to see the worthiness of the human race, Helen gets my vote as the most important and believable human character in the history of first contact movies, and it is her actions that end up saving the world from swift and utter annihilation. She is also the character who utters the now-familiar/immortal phrase "Klaatu barado nikto," and if you have no idea what that means I urge you, no, I fucking command you to rent the original THE DAY THE EARTH STOOD STILL immediately. On the short list of "The 5 Most Significant Science-Fiction Films Ever Made," THE DAY THE EARTH STOOD STILL rates right near the top position, and Patricia Neal is one of the elements that places it there.
Posted by Bunche (pop culture ronin) at Monday, August 09, 2010